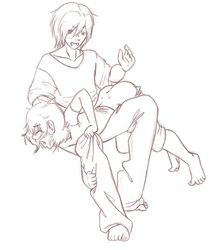 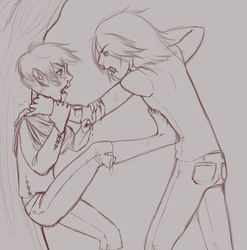 i'm working on a project, so i figure i'll upload some older stuff to introduce some characters i haven't uploaded yet

Age 5- Cute, adorable and curious. He's a little bundle of cute, from his quiet obedience, to his curious questions about everything and anything. He was a good little mama's boy, always clinging to her leg and 'helping' her with what ever she was doing at the time. Dispite being such a good boy, he had a tendency of getting hurt, and when he did get hurt, he almost always ended up in a cast. by the age of 5, he's already broken 10 bones. He was soon diagnosed with fragile bones and mostly kept inside where his mother could keep an eye on him.

Age 13- was sent to a catholic boarding school for secondary schooling (middle school and high school). He's kept from sports and gym classes, both because of his fragile bones and from a complete disinterest in physical sports. He's a smart boy and loves to study. He's mostly found in the library and gets the best grades in class. Other boys in class bully and tease him for being 'girly' and 'nerdy' and 'teacher's pet', among other things. Has very few friends outside of teachers.

Age 17- has figured out by now that he has absolutely does not share his classmate's interest in girls, nor does he find their smutty magazines hot or arousing, and feels no guilt in ratting them out for having them in the dorms. He's still very much a nerd, but his school grades have dropped sharply as his wish to follow a career in robotics is quiet literally smashed by his parents. He has little wish to continue to be the 'good child' but still fears going against the church and really accepting that he is gay. He decides to be celibate for the rest of his life, and makes no effort to befriend anyone his age. He graduates high school with no close friends and soon moves out to a small studio apartment with a mediocre job as a factory worker.

Age 25- has recently gotten a new roommate, accepted that he's gay, diagnosed with a genetic disorder (that was the cause of the fragile bones, as well as his thin frame and a slew of other problems) and quit his factory job in favor of returning to school. He's also moved to another state and now lives in a house that was built to suit him and his new limitations (now very prone to becoming weak and ill). Despite his illness, he's rather happy with life.