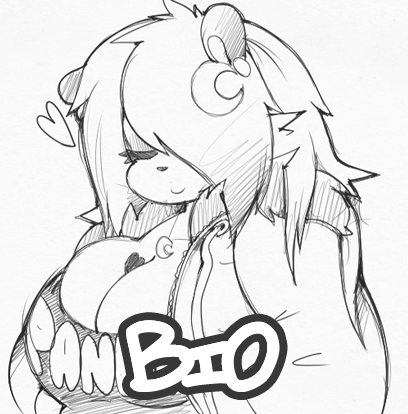 Luna is a supporting protagonist within the main cast of CJRFM... eeeeeyep!

Luna is a voluptuously curvaceous 19 year old panda chick (and adorable marshmallow) of Chinese ancestral decent. Often nicknamed "loo" or "loo loo" for extra cuteness, she is very much the British "Garage Girl" stereotype. With her East London Cockney Accent, tattooed cleavage, pearl earrings and puffy pink bomber jacket. But like Minx and her clashing subcultures, Luna also has a bit of scene queen mixed in! (If that isn't obvious) xD so yeah she's a babe! Luna grew up on the same council estate with most of the main cast, being familiar with a handful of characters since she was a little girl. She lives in a small flat with her single father (an ex police officer). Her mother I won’t go into detail about because I don't want to spoil any plot but lets just say it's complicated =w=” Luna spends most of her day working in a hair salon but by night she pretty much runs the CJRFM radio station. Business wise she takes care of things like organizing DJ slots, affiliating advertisements, counting money and generally managing things. Because she's pretty good at that sort of stuff =w=

Lunas personality is the "NICE" girl. Besides generally being quite laid back and bubbly she’s always the person to pick people back up when they fall down. She is as motherly as she is a best friend. Anyone has a problem? talk to loo loo. All in all Luna is a comforting and friendly optimist and a motivator with a big warm heart (and chest >//.//>).

However that's not to say she doesn't have her own problems.. Despite seeming confident for the most part she is still young and sensitive, for instance, when provoked about her image negatively she gets extremely uncomfortable (Especially when it's to do with her weight)..
The fact Luna is a panda is also a key attribute.. as Panda’s, like in the real world are quite a rare and beautiful species of animal in my lore.. This gives Luna quite a large and special presence. Unfortunately this can also mean she is a big target.. She can sometimes be a bit “too” nice also and thus, can easily be deceived and taken advantage of because of this.. which is sad… but I feel this is true to life in some relate able and personal way.

Back to the nice stuff, Luna is the type of British girl who tries hard to be a posh bird but her chavtastic UK Garage girl trash always manages to shine through.. and the results are adorable.. For example she gets a little embarrassed when people pick up on her very strong Cockney accent (for example pronouncing "Horse" as "Orse" and especially when she's trying hard to talk posh)
Luna is the only character in the main cast with a licence to drive, so as well as being somewhat of a therapist who will listen to your problems, she’s always giving people lifts (and free hair cuts) xD She is that type of girl to dance around in her room and quietly sing into her hair brush which is relevant because she is actually quite good at singing... But is far too shy to do such a thing in front of anyone

Luna also has an older sister named Sol. (YES. LUNA HAS A SISTER DUNDUNDUN) although they are pretty much completely different from each other.. which sometimes causes a few conflicts between them.. but aye that's just being sisters aye? (more info on her in the future =w=')

Luna was very different in her young teen years, she was totally swept up by the “emo phase” despite being mates with with the gangsta lads and chav girls. She was generally a lot more wild then the calm character she is now =w=… I guess the scene girl phase never left her appearance wise though huh? xD

Loo was always and still is very popular with the boys (as expected) and thus, is subject to a few romantic struggles and drama in the story.. Especially between Spliff, Tuggz and Roxie. Luna has a huge crush on Spliff. Despite fancying him a lot, certain characteristics and personality habits he has are very off putting to her though such as his addiction to marijuana.. (And his tendencies to get on really well with other girls which naturally makes her feel a bit awkward and jealous) However being a “mumsy” optimistic kind of girl she tries her best to help him deal with the weed addiction… which can be quite stressful and even heart breaking at times.. But she’s in love with him enough to care.. On the other hand Rox is obviously in love with her but Luna is straight (mostly) uh ohhh! =w='''' Oh yeah and Tuggz just has a bone for her

So yeah that's loo loo! Oh, just to tease you guys a bit, She is a huge closet geek. without going into the realms of your typical Mary Sue, She doesn't really associate her nerdy side with her friends as she feels a little embarrassed of just how nerdy she can be.. But By geeky I mean she is an avid MMORPG player at early hours of the morning and probably knows all the Pokemon off by heart =w=”

Admittedly Luna has pretty much just been eye candy for the longest time… so here goes without ruining anything.. Another popular request!

Let me know what you think! and what other characters you would like to hear about uwu