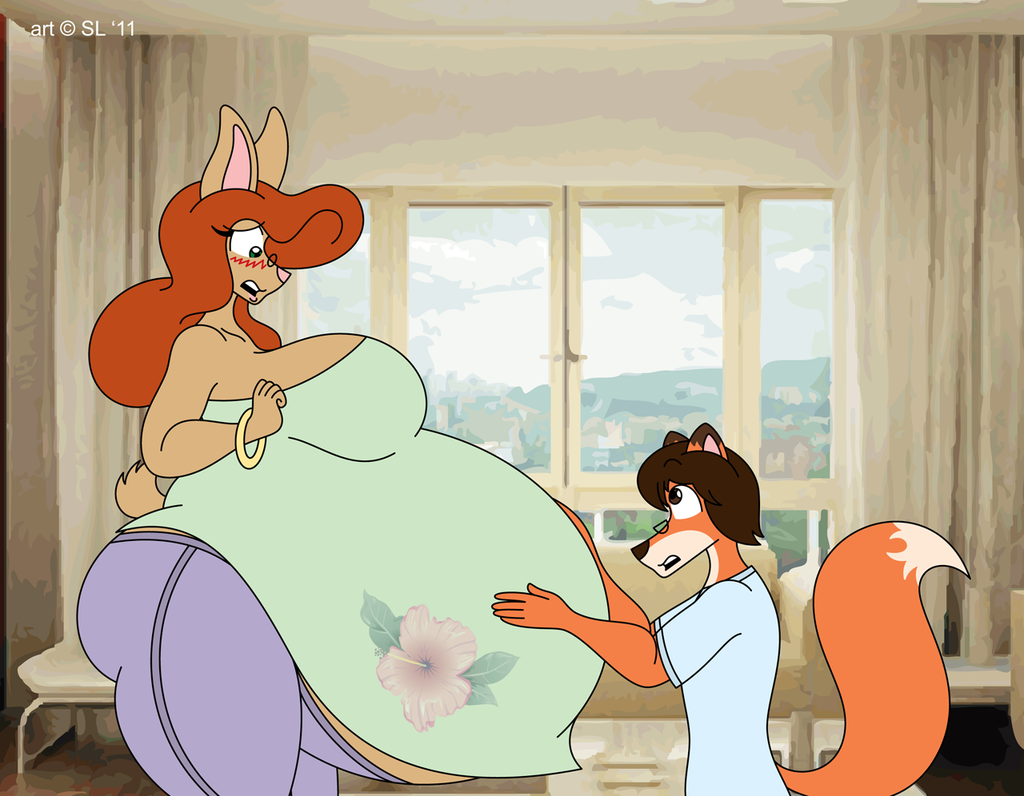 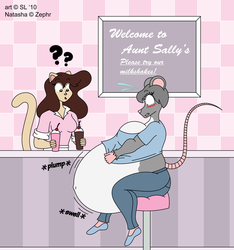 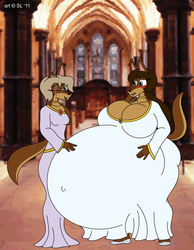 "Um...sweetie, I'm not feeling anything," declared a young man to his prolifically fecund wife. His hands gently stroking the contour of her magnanimously round belly as his knee supported the totality of his weight.

The robustly fertile rabbit looked down on him with a bemoaned gaze. It was very clear that she was upset.

"Exactly! That's the problem!" she exclaimed almost to the point of tears. "They stopped moving! Something's wrong! I can feel it!"

"Uh...Lily, honey," reassured her spouse as he rose from the floor. "That kind of thing happens all the time. The doctor said so himself, remember?"

The fox then moved to her side and lovingly clasped his hands around her own. He continued to comfort his wife, much like any good husband would.

"You're getting yourself worked up over nothing."

"Well...w-what if there really is a problem?" she queried pitifully as her dejected stare pierced her spectacles and into his very soul.

Her gaze broke away from his as her mind began to trail off into deep thought. Lily then came to a rather macabre epiphany.

"Oh God, what if they hate me!?" exclaimed Lily as she rested her hands away from her lover and moved them toward her face.

"...what?" replied the fox confusedly, nearly to the point of speechlessness.

"Oh they all hate me Carl, I just know it!" declared the now painfully distraught Lily to her mate.

"They aren't even born yet and already they think I'm a horrible mother!"

Tears began to well up in her eyes. The very idea of her children hating her was heart-wrenching; perhaps even soul-crushing. She immediately turned away from her husband out of shame. Carl however, swiftly recovered from his stupor and confronted her before she could leave the room.

"Lily, that's not true!" exclaimed Carl passionately, taking his wife aback as he turned her to face him again.

"You're the most loving, kind and sincere person I've ever known," he declared with genuine earnestness in his voice. "No one could ever hate you. Not even our children."

"Besides," he stated with a weak smile and a quiet tone. "I bet they're just tired. Getting ready to meet the most beautiful woman they'll ever see can take a lot out of a person."

He then finished his spiel with perhaps the sappiest line he could ever think of.

It was then, at that moment, that Lily's fears began to just melt away and instead be replaced by an overwhelming sense of tender affection toward her mate, friend, and lover. Carl's words were syrupy sweet but also strikingly heartfelt. Everything he said, he meant wholeheartedly; Lily knew that and loved him because of it.

"Oh, Carl..." said Lily softly, all the while getting ready to give her husband a most tender kiss.

However...before such an act could occur between these two young hearts, something happened. Something from within.

"OH!" declared Lily, pulling away suddenly from her husband; once again leaving him slightly confused. She experienced a spasm within the confines of her profusely populated protrusion. Her children were moving again and quite actively at that.

"Oh, thank god," she said with a sigh of relief and a soft hand to her belly. "They're okay. They're all okay."

After her statement of reprieve, Lily began to caress her belly soothingly; so as to feel the warmth and life that grew within her. Carl soon realized what was going on and responded by gently placing his hands on top of hers; thus sharing the moment with his magnificent spouse.

"No Lily," declared Carl warmly with a soft smile. "They're wonderful. Just like their mother."

And after hearing that statement, Lily finished what she started by giving her loving husband a kiss that seemed to last a lifetime.