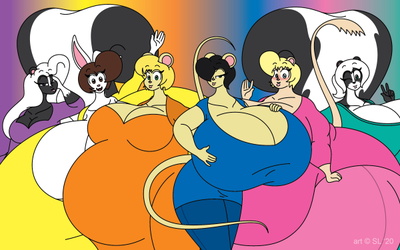 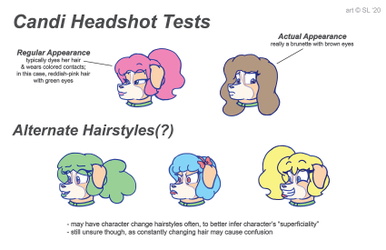 I wanted to further develop Ginny's rival (who I've now dubbed Candice "Candi" Sizemoore), so here's her character concept regarding her weight-gain potential.

The base idea would be that unlike Ginny (who tends to eat multiple meals and snacks throughout the day), Candi would be the sort to essentially binge on huge quantities of food during regular meal-times; to the point where she'd have a hugely-expanded stomach, thus leading to her body digesting the food, which in turn leads to her massive weight-gain (since the base idea would be that she wouldn't be just a pure weight-gain character, but also a feeding/stuffing character too).

And in case people were curious, yes, the thought is to have her be capable of being gratuitously fat, much like with my Ginny; though in Candi's case, while she could potentially be much fatter than Ginny, Ginny would still be able to "out-eat" (and even outweigh) Candi on a regular basis; hence why she considers Ginny to be her rival and nemesis, even though I'm considering Ginny to be more of an admirer to Candi, rather than a true rival (maybe even have it be a "frenemy" type of situation).

So with that in mind, while Ginny wants to be just as fat as possible, Candi wants to be the biggest there is, both in popularity as an online star, as well as in sheer fatness.

Anyway, everything here is still kind-of a work-in-progress, but I hope you all enjoy this stuff so far. =3