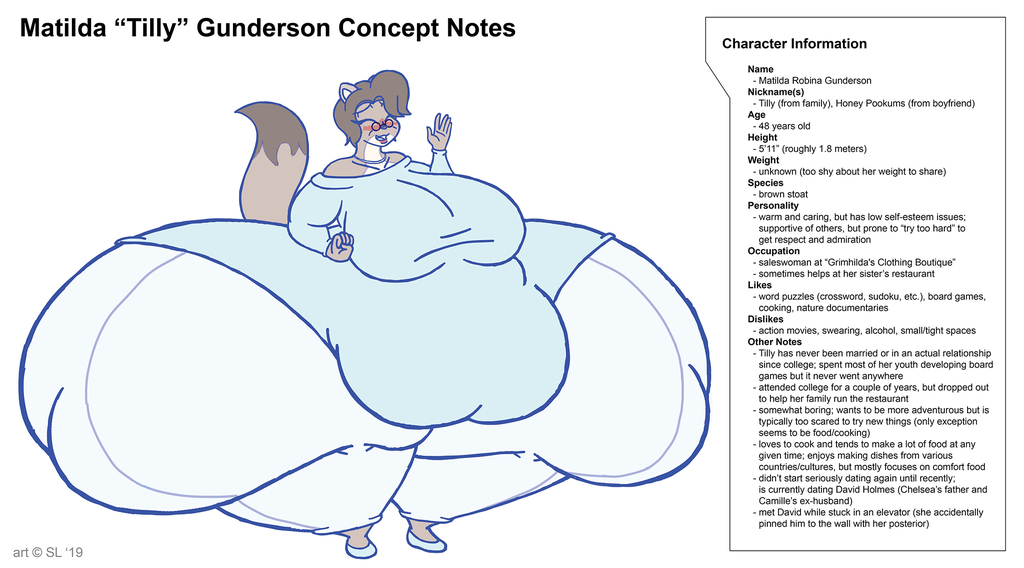 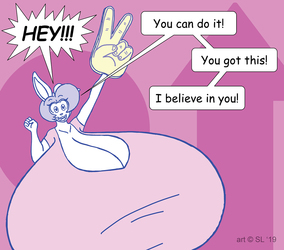 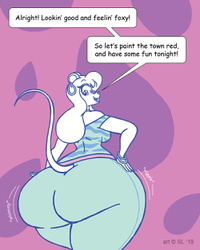 Much like with Ginnette Gaines, this is actually a character I've been meaning to do for a while; with this one though, I wanted to create a character that'd be another foil for Chelsea Holmes and her parents, in that Chelsea would not only have to deal with someone that's way bigger than she is, but also has the potential to be her new stepmom.

So with that in mind, meet Matilda "Tilly" Gunderson, David Holmes' new girlfriend; a brown stoat whose sheer bootyliciousness is matched only by the size of her heart (and that's saying something, considering just how huge that booty happens to be). =p

Now, as for backstory, Tilly was the quiet sort growing up, who preferred to spend most of her time either solving word puzzles or playing board games; sometimes making up and inventing new games for her and her family to play. She'd even go so far as to actually build board game sets with elaborate rules, with the hopes to one day make her fortune as a board game designer.

By the time she reached her mid-30's however, she'd ultimately give up on that dream, after having to deal with years' worth of rejection from toy and game companies, who refused to invest in her ideas (though from time to time, she'll still work on new board game ideas, though she doesn't bother showing them to anyone).

To support herself, she'd work at her parents' comfort food restaurant, along with her younger sister; sometimes as a cook, and other times as a waitress. After working there off and on for several years though, she'd eventually have to quit; partially because she had a hard time working with her family (which was rather stressful for her), but mostly because during her later years, she gained a tremendous amount of weight (turns out giving up on your dreams tends to cause one to find solace in food, and when you work in a place that serves exclusively "comfort food", that leads to a rather expanded waistline - or in Tilly's case, some truly tremendous thunder thighs). And once your posterior is big enough to crush a couch, well, that tends to make working in a cramped kitchen rather tricky.

In any case though, after leaving her family's restaurant, she spent the next few years working various odd-jobs to get by, until finally finding a more permanent position at "Grimhilda's Clothing Boutique", where she's been working at ever since.

At least once a week though, she'll still help out at her family's restaurant (which has now been refurbished to better accommodate people of Tilly's "stature"); if nothing else, to at least check up on them and offer her support, especially after her father passed away a few years ago.

And with regards to relationships, Tilly never married, and hadn't been in a serious relationship since college (either because she just didn't have time for a relationship or because most of her previous boyfriends found her to be rather boring - it also didn't help that she only attended classes for about two years, before quitting college altogether); that was, until she met David Holmes (i.e. Chelsea's father and Camille's ex-husband).

As for how they first met, while Tilly was at a department store looking for a birthday gift for her niece (since her sister was married with three children), she attempted to ride the elevator down, so she could continue her search for the perfect gift. While busy texting on her phone however, she wasn't fully paying attention to her surroundings, and just backed into the elevator without looking; squishing David into the wall of the elevator in the process.

She didn't notice him until after the elevator doors closed; and before she could get out on the next available floor, the power went out throughout the whole store, causing the both of them to be stuck in the elevator for several hours. While trapped however, they both got over their initial embarrassment, and soon got to talking. Turns out, the both of them had a few things in common (like how he was there doing some birthday shopping too, for his daughter Chelsea) and seemed to enjoy each other's interests (like David's interest in painting, and Tilly's interest in board games).

And once the power came back on, they both exited (or in David's case, flopped out of) the elevator, with David taking the leap and asking Tilly out on a date (though at the time, it was just for a coffee and maybe some donuts). Ever since, the two of them have been dating, with Chelsea being rather mixed on the subject of them as an item (but that'll be a discussion for another time).

Anyway, I believe that's about all for now; sorry again for the rather rambly description, but I hope you all enjoyed it, along with the new character. And of course, feel free to ask me questions about her, if you happen to be curious. =3