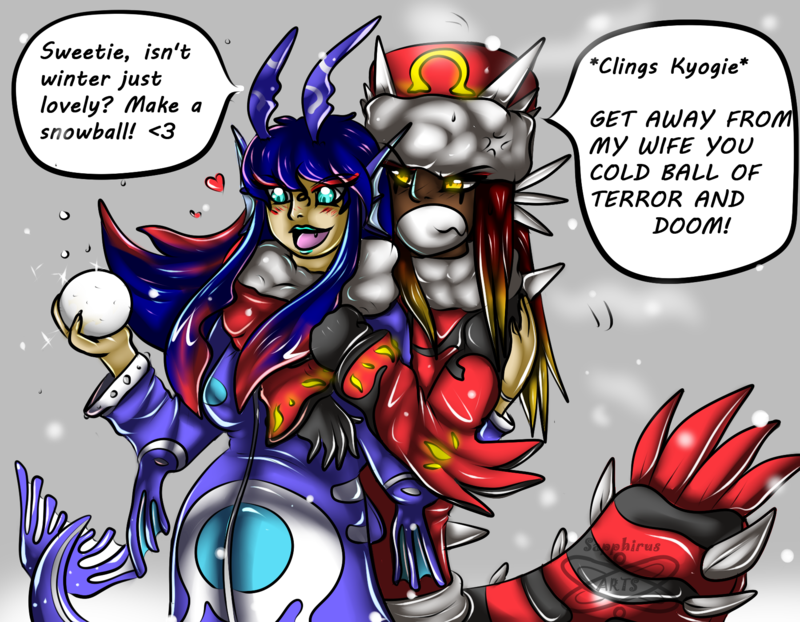 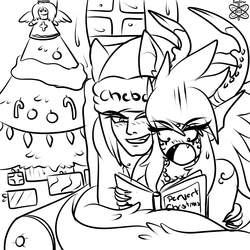 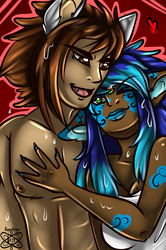 Side note: Interracial couples are a cute to see in art, which I favor on the side. Since well, seeing the same racial couples can get kinda boring. The world is made of different colors, and love shouldn't be judged by race or color. So I made Groudon Indian and Kyogre white.

Kyogre is named Kyogie and Groudon's name is Groudin (Had no other ideas LOL). Kyogie's female and Groudin's a male, they fell in love in the middle of battle in their primal forms, Kyogie had a crush on Groudin for a looong time. Ray encouraged their peacekeeping, since it's Christmas.

Soon after Mega Rayquaza got jealous and wanted attention so he got mad and wanted them to battle again, so the ppl can cheer him for saving the world again, didnt happen. Groudin ran over an ocean with the power of their love carrying Kyogie with him, angry Mega Rayquaza chased them, but ironically Groudin won the race. (Logic fail I know)

So now the sea and land Deities turned Gijinka to live the lives like the humans, abilities subsided in these forms, but they also keep their pokemon moves/weaknesses and advantages. Kyogie's well adapted to winter easily, she's also bearing Groudin's child, Groudin wears heated apparel and isnt fond of the snow and ice as you can see LOL.