Similarities +Sapphirus and Sapphire+ by Sapphirus 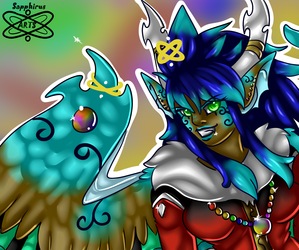 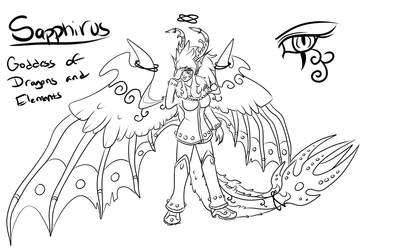 Update of her (just the horns changed): http://isapphirus.deviantart.com/art/New-Horns-Design-Sapphirus-468493939

Finally finished this picture, was lazy to color it for a while but got it done. This is My Persona (my alter ego) with her/my Special favorite legendary Pokemon Dialga named Sapphire. I love Dialga not only because it's a dragon type but of the design and colors also, relates to my character awesomely. Sapphirus's the Goddess of Dragons and Elements, though the blue streaks in her hair/spiral painted markings are not only blue but can also glow as well, and her gemstones are color assorted like rainbows since they symbolize her elemental powers (Rather help her maintain her powers also). She's an eastern designed Chimera dragoness/humanoid.
Sapph, being a deity herself, carries 5 more pokemon with her, poke'balls designed specifically so she can tell them apart. Palkia, Arceus, Reshiram, Zekrom and Kyurem. As they're my fav legends team when I use them. (Or Victini and Giratina sometimes) as she's a legends/dragon collector.

This Dialga I declare a male, because for some reason, it seems male to me anyway. Also I hate the Anti-Genderless crap with Pokemon for the legendaries. Sapphire is always out of his pokeball, as Sapphirus rides him through time a lot or general rides. Sapphire's also very protective of his mistress, ever since she encountered him injured while time traveling/from a unexpected encounter with a Giratina, healing his wounds.