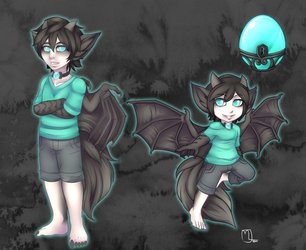 The bunny hair clip can talk?!

Intro to my two new characters~

The human's name is Cypher "X" Vanderville and his bunny hair clip's name is Widget. The Seraphy's name is Toxic (He's the new adopt I got from kingminyabe @ FA).

They'll eventually be a couple but for now Cypher is just gonna look at Toxic like he's a pervert or a weirdo. XD I'll be making more pictures of these two with a surprise~

Widget says what's on Cypher's mind if his thoughts are loud enough. It can do more, but I'm not gonna reveal that yet.