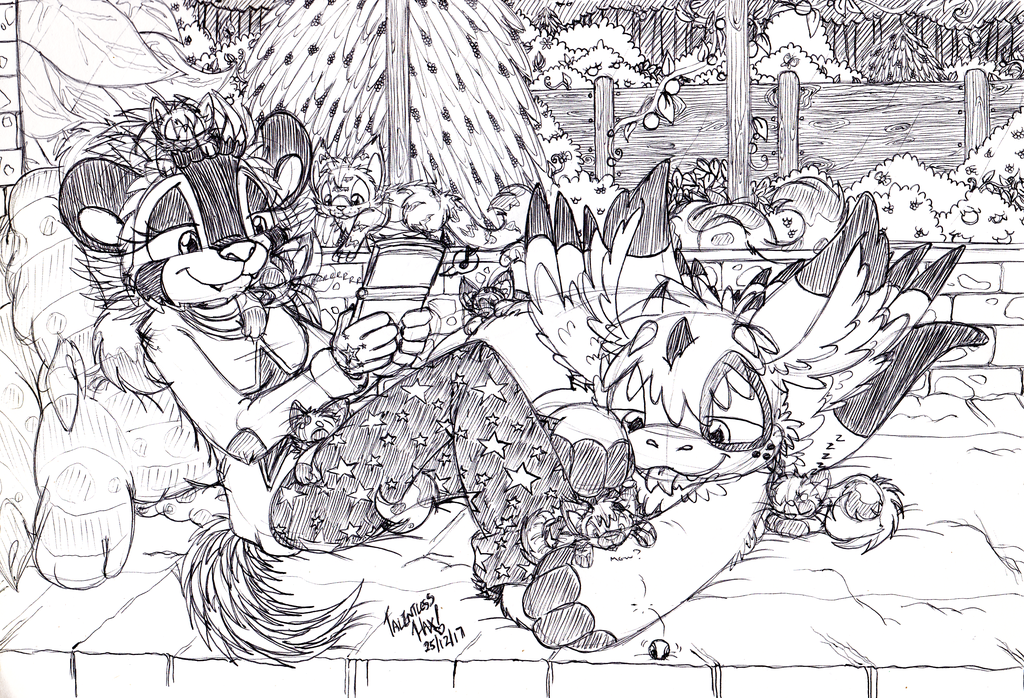 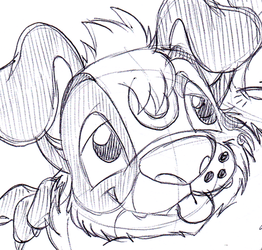 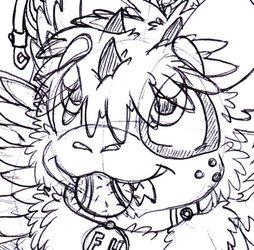 To make a long story short, I've had my hands full of tying up my parents' affairs, legalese/home contents and funeral arrangements; both were diagnosed with terminal cancer (Mom on Christmas Day 2016, Dad in March 2017) and it's in the "last few months/weeks/days" point in time for both of them. I'm under a pretty bad load of stress and pressure that hasn't eased very much over the timeframe, and I've been avoiding anything artwise here on Weasyl specifically (I've been posting on twitter mainly because it's easier - @VeeJayHedgehog).

This is one of the few full sketchwork pieces I've managed to churn out in the past ten months that I'm even remotely happy with. It shows a small slice of life scene of VJ's homelife, in which she has beds scattered all over the place and large-ish windows to enjoy the outside world (aka the Grey Zone which borders the fenceline of the property where she resides).

She's in her late twenties here, fostering an entire family of cats and kittens, alongside her beloved emotional support Dutchie, Fluffy, and likely on her flip-phone (yeah, she's not up to date on most personall tech on her home island; whatever works is fine by her really XD).

A lot of VJ's house is furnished differently because...well, I can't say she has 'decorating moodswings' but it's probably best to describe it that way. She doesn't have a "master bedroom", like at all. After her accident in her teenage years, getting to and from most parts of the house to the former master bedroom (now created into this back living space in the image above) was difficult, on either crutches on in her wheelchair. There are beds, couches, large cushions and beanbags spread entirely throughout her living space. She isn't big on company of her own kind per se, it's mainly because some days at work become so exhausting she will fall asleep pretty much anywhere and any time of the day or night. That and I suspect Fluffy and the other foster creatures like to lounge around and play until she gets home.

VJ's always liked wide open spaces, so at east and west points of her home she has large windows that show the outside world, partly hidden by fruit-bearing vines and leafy-green foliage and trees. Her backyard is not self-contained however. There is a fence that ends rather abruptly into a dilapidated mess just beyond the reach of the windows in the above image, mostly destroyed by a large fallen Pellor-tree that now houses several wild Kokerbirds and the occasional Spider-crab visitor. VJ only tends to her garden in the Spring months to combat the overgrowth during the Summer. During the other seasons, the wild game takes over the many duties involved and the place flourishes in fruit and flower.

Where her house stands she doesn't get much snow, unlike the main cityscape often does due to Skyland Central's winter winds. The temperature however does drop in quite spectacular fashion when Winter rolls around, but the best it manages is a morning frost that doesn't hang around for very long due to the rising sun. VJ likes to go jogging in this weather as it's one of the most visually spectacular seasons on Valanciana Island as many local species of trees and vines are in full fruit, full flower or both.

As for the cats...they were abandoned at an old office building due for demolition in the middle of the city and were subsequently rescued by Paws4Life and fostered out to her. That's momma (Coria) draped over her shoulders snoozing, Daddy (Artax) asleep on the windowsill, eldest tomcat (Grosvyn) checking out VJ's phone, youngest kittens snoozing on her quills (Jaxx), lap (Blitz) and Fluffy's back (Toren), playing with a jingle ball next to Fluffy's paw (Xanatos) and snoozing peacefully at Fluffy's side (Daffodil).

Fluffy adores the little animals VJ fosters, he's so incredibly gentle and loving (even when they nom on him!) that he always falls head over heels in love for them all. Eventually VJ adopts another cat (Dandelion) who becomes his best kitty friend <3