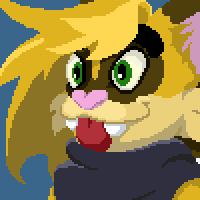 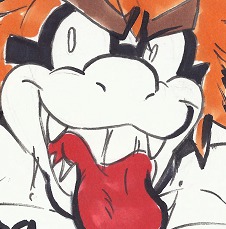 This was actually really fun to do, had a ton of help from VinVulpis as usual lol. The hardest part about this was doing it without outlines and trying to limit the tones for each color. I broke the rule once for the hair, I used a darker tone for the hair wrapping around the head which means I ended up using four tones for the hair, since only 3 tones caused some shading issues.... Actually, the hair was the hardest part to deal with. Since it's the same color as my fur, I had to rely completely on value to distinguish the head from the hair, which was hard to do with limited tones. I managed to get around it by dividing the hair with the highlighted tuft in the front.

Dumb trivia: I stole the red from Quote's hat for my TONGUUUE.