Padding through the long grass of the forest on all fours Nall lifted his head and peered over the carpet of green. He was trying to locate the tree that was their destination but the dew drenched grass was much taller then he was expecting for this time of year.

“Can you see anything?” the pine marten asked his passenger, twisting his neck so he could look back at the small fey creature perched on his back.

Whisper grinned, the green surmelle with the thick black mane of hair clambered to his feet, balancing himself on the wrapped parcels that had been tied onto Nall’s back.

“Not a thing, the tree is around here someplace though… isn’t it”

Nall sighed and shifted his back legs and craned his neck upwards, peering over the grass. The brown and cream coloured pine marten really wanted to stand up and get a good look, but doing so would dislodge Whisper and the gifts.

“Come on, you’re a magical creature,” Nall muttered at the surmelle, “Use some of that phenomenal cosmic power and find the right door.”

“Ok ok,” Whisper grumbled and tucked one paw into the pouch that was positioned snugly over his belly. For a moment his fingers bowed the furry pouch with their outline before he withdrew a small leather pouch, “Let’s see if I can still do this,” pouring a measure of glittering silver sand into his paw Whisper concentrated then threw the dust into the air.

For a moment the sparkling silver sand hung in the air then slowly and with purpose the glistening dust came together and started to weave a long strand of silver dust through the air toward a tree in the distance.

“Ok, there we are,” Nall started forward, large marten paws built for climbing trees flattening grass beneath his paws. By the time they arrived at the ancient oak with the door fitted into the side of it his fur was sparkling with a layer of dew drops. He really wanted to have a good shake, get the water out of his fur but Whisper left the boxes of presents behind as he jumped down and pushed the door open.

Inside the tree was hollow, a circular platform jutted out over a long shaft and a large basket attached to a rope and pulley gave access up and down the shaft. Wriggling his paws Whisper levitated the boxes into basket, climbed in and waited for Nall to join him.

For the marten it was a bit of a squeeze, he had to curl his long noodle like weasel body around the outside of the basket to fit. Paws resting on the edge of the wicker frame he peered down as Whisper used his magic to lower them down. They passed several landings, each one with three or four doors leading into different apartments.

The bottom of the shaft was their destination and as he jumped out to go knock on Nilla’s door Nall had to unwind himself from the basket. It took a few minutes as he had to move carefully to avoid crushing any of the boxes and parcels Whisper had brought with them, . The figure who opened the door wasn’t a surmelle like Whisper. They lacked the slender rodent like body, buck teeth, weasel fangs and pouch that were the earmark characteristics of the melle.

Instead this figure was orange and yellow, with a ruff of curled cotton around their shoulders and a zip running up the length of their chest and stomach. Nall sat down on his haunches and observed their big ears and tiny antlers and bright blue, very faux eyes.

“Hey Nall,” JB stepped back and held the door open so Whisper could carry the parcels in, “It’s Nilla’s birthday, but you know she created me so I bum around her flat trying to keep her out of trouble.”

Nall wriggled through the door and into the lounge space after the surmelle and wolpertinger, “That’s cool, is good to see you again it’s been awhile.”

“Yeah sorry JB,” Whisper said as he set the parcels down, “I didn’t bring you anything… though,” the green and black surmelle grinned suddenly, “I guess I brought you a Nall if you want him!”

“Wait… what… hey no you can’t just give me away!” Nall protested but it was way too late, Jellybean stepped forward and plamfed one big mitten like plush paw against the marten’s wet nose.

“Well… you can’t keep me,” Nall grumbled, “Besides you’ve not got the power to keep me,” the marten smirked, “No one can out magic me!”

“Oh I don’t know,” Jellybean grinned, “Whisper can I cache in that favour you owe me?”

The magical surmelle grinned and pulled a length of green crystal, wrapped in white and black metal out of his pouch and tossed the wand at Jellybean, “Sure thing, use me well, and remember Nall is a familiar spirit, easily bound!”

Nall dooked in alarm and tried to back out of the room but he was too big. Jellybean aimed the wand, flicked it in a curving circular motion and a spark of magical energy. Nall squeaked as the strange spell slithered over his nose and snout, fur lay down flat and grew a soft, velveteen sheen. His nose dried out, becoming bright shiny plastic.

Dooking in alarm Nall felt his muzzle seal shit, his tongue and teeth lost feeling and as he squirmed Nall found his limbs slowing down. He lost feeling in his limbs, his body sank to the floor as it became velvet and stuffing. Stitching bloomed around his joints, along his side and his interior became soft and squishy and full of stuffing.

The change didn’t take long nor did the shrinking effect, minute by minute Nall seemed to lose size until with a soft thump he hit the floor and fell over. Not that he had to lie there for long, Jellybean picked him up and squeezed him in a large hug. Stuffing shifted, faux velvet fur got rumpled and for a moment Nall felt, really good!

“Well thanks Whisper, I’ve always wanted my own plush Nall!” Jellybean declared as he squeezed the former living marten and shifted and kneaded his stuffing around, “He looks great.”

Whisper laughed and settled down in a chair, “You’re welcome, is why I brought him along. Nall makes the best everything, he’s so mutable and interchangeable species wise!”

“He’s great, now then we better get the rest of these gifts ready for Nilla,”

Whisper eyed the pile of presents then looked at the magic wand that was his real body discarded on the table, “You could always put a bit more magic into proceedings for the party.”

Jellybean grinned, shifting his plush marten to one arm and picked up the wand, “Sure thing, let’s make this party amazing for Nilla, starting with you.”

Whisper’s head came up, “Hey wait, what, that is me and…” he was cut off as a blast of green magic shot out of the top of the wand and engulfed the surmelle.

He squeaked in alarm and fell backwards with a thump as his legs started to swell. In moments they had gotten huge and fluffy, their natural furry covering slicking down into a soft, cotton fabric cloth. The faux fur continued to spread as Whisper’s magically summoned body continued to twist and shift.

That was the hazard of letting someone else direct his magic, it could be turned against his body! Now he was getting big and fluffy and soft as his claws turned plastic, his buck teeth grew outwards and solidified into plastic and his eyes transformed into black glass beads. His thick shaggy mohawk got floppy made from wool threaded and curled like Jellybean’s ruff. His huge arms settled to the ground and he settled back against the wall now stuffed to capacity with chunks of memory foam and beads.

His dopey, overly happy smile was now fixed as the giant bean bag was immediately used by Jellybean as a seat. He snuggled down with his plush marten in his lap and the wand tucked inside his chest. It was the safest place to keep Whisper out of trouble. Now he just had to wait for Nilla to get home and he could surprise her with triple the normal number living plush toys! 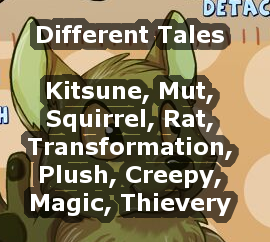