Giving at Christmas by Rufellen 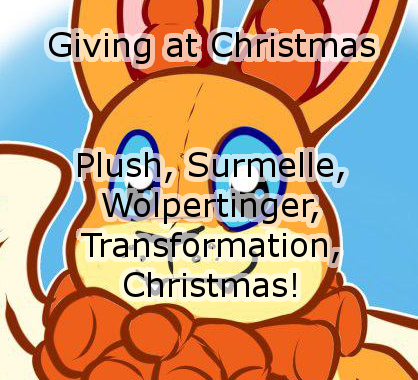 It wasn’t so much the voices that woke Dave up but the bickering. Words though low in tone were loud enough to carry through the still air of the dormitory. Slowly sitting up the youngster pulled his thin blanket up around his chin and looked around worriedly. The voices were coming from the direction of the window and as he watched the curtains shifted as the ancient, decrepit sash window slid upwards.

“Push already, I can nearly pull myself inside,” the first voice was saying, their tone light, masculine, yet odd, lacking the wheeze of breath that accompanied normal speech.

“I am pushing lard hips, what on earth have you stuffed yourself with, you are not normally this stupidly big!” the second voice was fast, chittery, swift with each word tumbling out almost on top of the last.

“I am as you made me,” the first voice retorted and Dave bit back scream as he made out a pair of hands and a head in the darkness. They were part way through the window but it looked as if their stomach or hips were stuck. It was too dark to make out other details but the young human edged toward the far side of his bed, ready to make a run for it and scream the alarm.

“I did not make you this big! Gods…” the second voice chittered in anger and then the creature caught in the window shifted and with a soft pop lurched through into the room.

Dave bolted, running for it, tumbling out of his bed in his haste, legs tangling with his duvet cover. With a thump he hit the floor and struggled to pull his legs free.

“Now look what you’ve done, you woke some up,” the first voice complained and Dave looked up in horror as the monster loomed over him in the dark.

“Me!” the second voice growled, “You’re the one who made all the noise.”

“Please don’t eat me,” Dave whimpered, “I’ll be good, I promise I…” he edged away from the looming monster. They had wings, big black wings that spread out to either side and horns, he could just make them out atop their head. Nestled against the tall, curving ears… the monster was going to eat him he just knew it.
“Eat you I won’t…” which was as far as the creature got before the light clicked on. The room was flooded with illumination and Dave winched, shading his eyes as the harsh light revealed all. Blinking his eyes to clear them Dave could just about make out Sam by the door. She was staring at the creatures by Dave’s bed in shock, her dark brown hair a tangled mess were her night time braid had come undone.

Dave wasn’t surprised she’d been struck dumb. The monster looming over Dave was well frankly not very monstrous. They had bright orange fur, a soft creamy underbelly and the ruff around their head was tangled orange wool. It had tiny orange horns, big bunny like ears and huge white wings. Nestled in the space beneath their neck was a big metal zipper. Their tail was fluffy and thick and they had the silliest, goofiest expression of all on their face.

Dave couldn’t help himself he giggled and the creature smirked and set his hands on his hips, “Oh funny am I? Mr don’t eat me, well I am as you can see not going to eat you! It is Christmas and I am here to spread some cheer!”

“What.. are you…” Jim called out from his bed, everyone else was awake now, sitting up and bed and staring at the creature. They were distracted as another figure hopped down off the windowsill.

“He’s Jellybean, my finest creation,” she declared in her rapid fire voice. She must have been nearly four feet tall, slender, thing and her hair was an amazing shaggy mix of red and green with sparkly glitter mixed into it. It looked like Christmas tinsel. She also had mismatched eyes, one green, the other blue and an odd jaw. Buck rodent teeth and sharp weasel fangs that she showed off as she smiled around the dormitory.

“I’m Nilla, he’s JB and we are here to spread some Christmas,” she struck a ridiculous pose and tucked one hand into the natural pouch that was part of her stomach. She pulled out a Christmas cracker and tossed it at Brian’s bed then skipped out into the room and started handing out crackers to everyone.

“We… can’t have Christmas,” Sam said, moving back to her bed nervously, “Ms Ostile says Christmas is not for orphans. We must work, and help to earn our keep.”
Jellybean reached down and pulled Dave to his feet and smiled at him. “Nonsense, everyone deserves something nice at Christmas,” he reached up and pulled the zipper on his chest down part way, “And we are here to share.”

Reaching inside he pulled out a small packaged. It was wrapped in blue paper with yellow and red snowflakes and shaped like a reindeer. It even had antlers all carefully wrapped up. Holding the small package in one hand he started to pull out another. Dave backed up and fell onto his bed with a thump, staring wide at the weird critter.

“I am Jellybean, that’s who i am, what is more complicated you see…”

He stopped talking as Nilla nudged him aside and held out a cracker to Dave, “He’s a Wolpertinger, a Plush toy and magical! It took me ages to make him, but it was worth it as I am as you can see so awesome!”

Jellybean grinned and offered one of the deer packages to Dave, “I got gifts for everyone we can have our own Christmas!”

“I don’t know,” Same said worriedly, if Ms Ostile finds out about this…”

“She won’t find out,” Jellybean said, “She is probably fast asleep…”

The door slammed out, the children shrieked and dived for their beds as the tall, thin lady with severe black hair stood in the doorway. She was wearing a dark navy blue dressing gown and she looked pissed.

“Why are their lights on, why are you out of bed! You will all pay for this and… what on earth are you!”

“Er, Nilla,” Jellybean whispered as the old crone started to walk forwards toward them.

The surmelle Nilla grinned and pulled a glass bottle out of her pouch and smirked wider, “I will deal with her.”

Jumping up on the bed the fairy creature lobbed the bottle at the orphanage matron. It smashed on the floor before her and she drew from the thick green mist that boiled up out of the bottle.

“What…” was all she had time to shout before the mist engulfed her. She must have breathed it in, or maybe it only needed to touch her skin. There was a flash, a sparkle of green light and the mist seemed to be sucked out of the air.

Ms Ostile was gone, lying in her place, shreds of her dressing gown and nightie collected atop her was a massive beanbag. It was shaped like a surmelle, with yellow and black fur. A big round stomach for sitting on and a goofy smiling face with plastic teeth and glass eyes looking down on them all.

“Did you kill her?” Sam asked, bravely moving forward to nudge the beanbag. She jumped back as Nilla leapt off the bed and landed on it, causing the stuffing to shift and rustle as the surmelle got comfy.

“Nope, just made her comfy, it’ll wear off by the end of tomorrow, though it may leave her as a ‘melle… I forgot to test that bit! Anyway everyone gather around!”

Jellybean moved over, holding up the presents, “It’s Christmas for everyone, we’re going to have a great time I promise!” The children moved away from their beds and gathered around the wolpertinger and surmelle. Nilla had more bottles, that produced such things as a Christmas Tree, stockings and decorations! Jellybean had presents for everyone and as the sun rose outside Christmas cheer wound its way through out the orphanage as the two fey critters did their bit to bring some cheer into the day.

A Christmas Gift story for