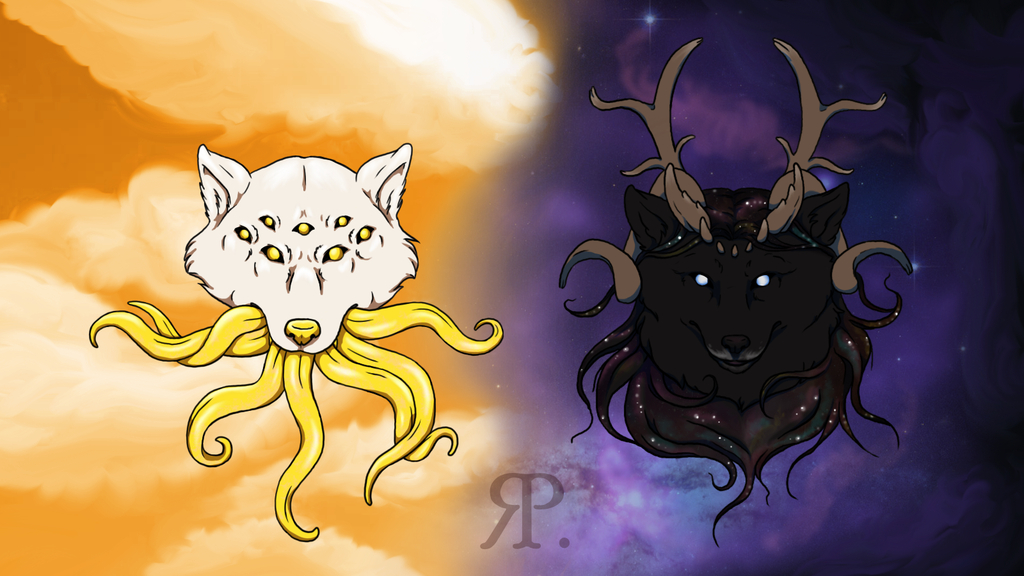 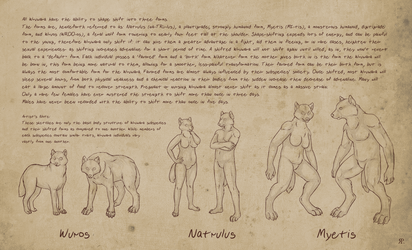 "Wruwara revere two head spiritual figures, or deities. One is a male, an eater of beasts, a herder and hunter, who's symbolized as a large, white Wruwara, usually a Wruos, with seven, golden eyes and seven, long, golden tongues that writhe out of his mouth like the fire of the sun. He's called a collection of names throughout the subspecies of Wruwara, but the most common is Fyormion (FYOR-mē-on)- sounding much like 'Fire Mane' in the Wruwara dialect -but sometimes just Fyor. The other is a female with a great round belly, and large, heavy breasts in the form Natrulus. Her pelt is usually depicted black, but the Wruwara claim it is a deep, dark black, “darker than nothing and everything at once.” She sports a collection of horns that are a combination of the Awroon, Groomah, and Brooaff (the only three subspecies with horns), that branch out over her head much like a crown in many depictions. Luhnmorra (LOON-mōr-ah), or Luhn, is the name the Wruwara have given her, and her silver eyes and long, flowing, aging hair represent the two moons that orbit the planet- Lumma and Rhar -and the abundant constellations that surround them. She is the mother of all living things and she so loved the Wruwara that she gave them souls, so they could be enlightened.

Wruwara songs tell of how Luhn and Fyor were once cursed by the ancient Teachers for enlightening the Wruwara and teaching them to speak, shift and work magic. They were destined to never be near each other ever again, and so were sent to opposite sides of the globe. But because their love for each other was so strong, they forever pursued the other, vowing to be together again, and circle the planet of Lunalah eternally. Once in a long while, their love breaks the spell of the ancient Teachers, and they are together in the heavens, Luhn's supple form eclipsing Fyor in an enchanted embrace.

In the last days before the world is devoured by the waves of the universal sea, Fyor and Luhn will finally have broken their spell and return to the Wruwara to fight along side them. When Fyor's mighty paws strike the planet's surface, the ground will split and volcanoes will follow him,. Stars will fall from Luhn's hair, scorching the unclean beasts that seek to destroy all they created. The sky will turn red, stained with the blood of their enemies, and all of the fallen Wruwara warriors will spring to life at the sound of their ghostly howls."