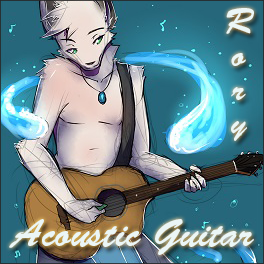 Felt it was about time to give Rory a theme song, or at least the workings of one. I wanted to channel my sadness into writing, but I ended up putting it into music again.

Really, I just thought of this about half an hour ago, played it out a few times, and wanted to get it recorded for feedback while my inspiration was hot. The essence of this song is snowfall... so let me paint a picture.

On many occasions, snowfall starts slowly, but rapidly picks up the pace if the snow will accumulate with any significance. Taking a walk alone while it's snowing is a weird experience... the world is muted, with everything being washed in the same color. The irony is, Rory's already the color of snow himself, so his very essence blends with the snow and makes him more or less invisible. The snow is warm to him, but it's like a blanket that shuns the rest of the world from his existence. He walks alone, leaving nothing but a single pair of footprints in his wake, with even those destined to be washed away in the steady pace of snowfall.

Honestly, I feel like Rory far too often, which is why he and I share the same name. I look around me every day and see the countless others who walk with another, and I look at my path and wonder when a second pair of footprints will trail next to mine. No one can predict the future, but for now I take comfort in the snow's warmth.

Just had to get this feeling out in a productive way, thanks for listening.