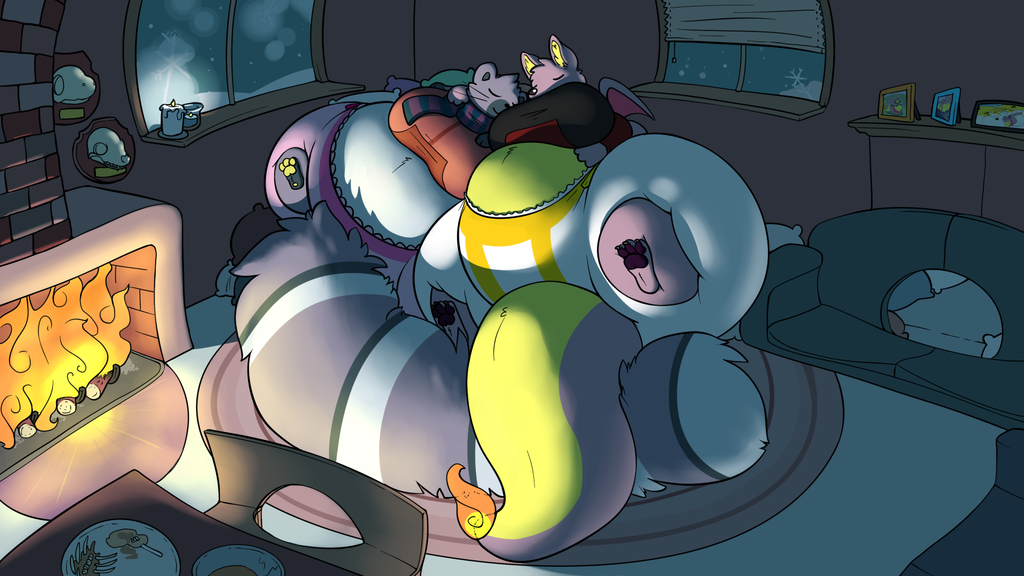 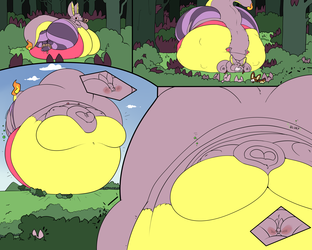 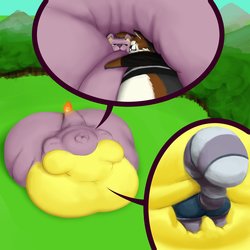 After a long, horrible day of troubles and worries.. It's always nice to come back to something- or someone you love..~ When life gets you down and you remember that despite all the rough patches, there's still the good spots that make it all worth while~

An absolutely adorable commission drawn by Gecko Who I still cannot possibly thank enough for putting so much work and detail into this lovely piece, thank you again, so very much~ <3

And because I adored this piece so insurmountably much, I decided to write up a 'lil short story to go along with it~ It's not super long or anything, but I hope you all enjoy~

Roo sighed in defeat as he stood in front of the closed wooden door to his humble abode, snow having draped itself over his breasts, ears, hips, and curves. Shivering, he knocked a few times before cupping his elbows in his frigid, plump paws, rubbing them softly and crossing his arms in the process. "Man, today has been... awful." Roo frowned and his ears folded back, the snow that had found it's place among their fluffs sliding off onto his humongous diapered butt. The sun had almost finished setting, as dusk teetered on the edge of nightfall. The solar charged lanterns strewn along the path leading out from the home flicking themselves on promptly as the sun hid away behind the mountains and trees, retreating from the overwhelming chill of the snow.

Roo rubbed his upper arms and let out an irrepressible sneeze before shaking his head and sniffling, both from the sneeze and sadness of a depressing day in the snow. At last, Roo could hear a 'thum- thump- THump- THUMP' up to the door, heavy footfall making it's way to the entry before the click of the lock allowed him to enter. The door opened, and there stood Lemmy, his striped scarf twisting and writhing as cold air flooded into the house past the two of them. Hastily grabbing Roo's chilled paw, Lemmy pulled him in and shut the door behind them, snow strewn across the wooden floor in the entry of the home.

"Goodness sweetie, y-you look like a plump popsicle!" Lemmy worryingly stated, holding Roo's paw in both of his own while Roo removed his snow flickled scarf and set it aside on the coat rack. In his best efforts through his unceasing shivers, Roo tried to explain the present situation as best as he could to his loving, fat, poofy rumped boyfriend "Y-Yeah, it's a m-mess out there, the road's all blocked off from the snow. And the power's still out so we can't really call Drake at the moment to see how he's holding up either." Roo sighed, disheartened, and looked to the ground with his ears once again folded back in defeat.

Lemmy looked away for a moment and pondered the situation before letting out a sigh of his own. Reaching up with one of his paws while he gripped Roo's, to place it upon his slowly warming cheek, standing on his tippy toes to press lips with the overweight marsupial and give him a loving, comforting kiss. Roo closed his eyes as his shivering came to a slow halt, while Lemmy did the same, placing his paws behind the plump lemur's plush head, and doughy back, as Lemmy rubbed Roo's rotund belly and caressed his cheek.

Slowly ending the kiss, Lemmy pressed his forehead against Roo's and kept close to him "Don't worry hun, Drake's a capable kitty, and I-I'm positive he'll be okay, after all, he's probably still got electric and stuff over at his house!" Roo reached over to press Lemmy dearly into his distended middle, smushing his face between his breasts, and into his stretched bra of a hoodie. "Thank you Lemlem, you wonderful poofy butt cutie.. I really needed that." Roo smiled and smooched Lemmy's forehead before letting him go.

"O-Oh, by the way, sorry the power's out, you always seem to come over when stuff goes wrong around here." Roo averted his eyes and whined softly before Lemmy turned Roo's head back to him and gave him another comforting smooch to his muzzle, squeezing the big kangaroo tightly to him as their bellies, breasts, and diapers pressed snugly against each other's. "Now now, you big worrisome fluffball, it's okay! As long as I get to be with you, I'm happy. And we've still got the fire to warm up with! I was waiting for ya to get back before I got it started."

Roo smirked and giggled softly before rubbing cheeks with Lemmy and snuggling more "Allow me hun, I've got it." Roo said, as joy steadily returned to his voice. The two held paws before Roo gently settled Lemmy into a humongous pile of pillows strewn about in the corner of the room. He wriggled and couldn't help but purr contently as he got comfortable in the large pile, waiting for Roo as he stuck his tail into the log filled fireplace, allowing his tailflame to ignite it's contents. The warmth was instant, it was comforting, and the flames licked the air as the welcoming glow of the fire filled the room.

Snow continued to fall outside past the frost veiled windows, Roo stared for a moment and wondered if everything would be okay before shaking his head softly and smiling. He had Lemmy, and that's all he needed to know. Settling down amongst the plethora of pillows with Lemmy, the two got nice and cozy together as the crackling of the fire echoed through the home, accompanied by the crinkling of their diapers, and the loud, delighted purrs of them both. Roo rested his plump tail into the thick, plush fluffs of his partner's, wrapping his arm around Lemmy as the lemur leaned into Roo's bosom. His snout and cheek squishing into his plump, doughy breast, using it as his own personal pillow as the two closed their eyes and sighed once more, but this time out of content, out of delight, out of the joy of being with one another to experience this blissful moment.