In the midst of Summer at the local beach during a delightful, temperate afternoon, a snowy furred bunny lay happily on a large, plush towel, enveloped by the shade of his umbrella. Resting on his orange beach towel in his lime and aquamarine colored floral swim trunks while seagulls cawed to one another, soaring overhead. Varying sized waves lapping at the beach's shore and filling the air with the extraordinary sounds and salty scent of the sea. The bunny lay with his arms crossed behind his head, eyes closed while happily reclining on his towel, enveloped in the shade of his umbrella, as happy as could be.

A pleasantly warm breeze of sea air washed over Kero, the relaxed bun, before he let out a content sigh. Opening his eyes at the encroaching sandy sound of nearby footsteps. Upon opening them, Kero was greeted by a rather smug looking cyan yoshi, having dawned black sunglasses and red-orange swim trunks with a black pull strings. His arms were crossed as he tapped one of his sandals on the sandy ground impatiently.

"Hey, bunbun, you're in my spot." The yoshi rudely remarked, looking down at Kero as he continued to tap his foot. Kero looked confused and raised a brow before looking down at the yoshi's incessantly tapping foot. Despite the yoshi so rudely intruding on Kero's relaxing beach day, he had to admit that his paws looked absolutely lovely, hypnotizing even. The yoshi clenched his toes against his sandals and huffed through his bulbous, nose. "Hey now, hear what I say!?" The yoshi exclaimed in displeasure at the lack of a response, even more so, the lack of even so much as movement from the bunny laying before him.

Removing his sunglasses the yoshi noticed that Kero was completely enthralled by his feet, staring longingly at those lovely paws. Upon seeing this, he smirked mischievously teasingly wiggling his toes in his sandals. Causing Kero to wriggle about on his towel some in turn. "Hey now, I see you like these beauties of mine, maybe you could help me do a little maintenance, eh? Lovely paws like these don't maintain themselves, you know." The yoshi gave a toothy, almost evil looking grin down towards the enchanted bunny, who simply continued to stare at those perfect, cyan paws, nodding softly. "Oh, s-sure thing."

The yoshi walked forward, carelessly stepping onto Kero's middle, making him wince softly due to the weight bearing down on his exposed middle. "Hehe, good bun, now stay put." Raising one of his sandal adorned feet, the yoshi pressed the bottom of his shoe against Kero's cheek, grinding it softly as he steadily increased his weight, leaning into his step as he trod all over the bunny's face. Playfully running the bottom of his shoe from heel to tip over his face repeatedly before pressing it's middle at Kero's lips. Teasingly grinding it against them softly as the yoshi assertively put his hands oh his hips and smirked once more.

"Now then, kiss my sole. Do it, little bunny." The yoshi wanted to see just how much this bunny was willing to do for his feet, and much to his delight, Kero did exactly as he was ordered. Kero began smooching at the bottom of the sandal with much joy, his body quivering softly with bliss. "Mmmnnf.." Kero mumbled and murred with joy as he brought his hands up to grip the shoe and paw stamping over his face.

As he continued to kiss and swoon over being those paw's personal play thing, the yoshi shifted his weight to completely put all on Kero's face, he grunted muffledly before being immediately silenced by the weight bearing down on him, but the weight was nothing when Kero saw the yoshi beginning to take his sandal off, putting his bare paw onto Kero's middle. He began to run his paw slowly up and down his midsection, much like he would a doormat. Rubbing off the sand that had gotten stuck to the underside of his paw before shifting his weight back to his now bare foot.

The yoshi chuckled to himself, seeing Kero's eyes lit up like a baby bun on Christmas morning as he lifted his other paw and slowly began to take off his remaining sandal. "You want this bunny boy?" The yoshi teasingly inquired, smirking with a raised brow. Getting a quick, eager few nods in return from Kero, who had his eyes glued to that soaring paw above his head. The yoshi removed his sandal and tossed it to the side without a care. Wiggling his plump three digits in the air teasingly as he ground his heel into Kero's gut. "Now then, you want these feet?" Kero nodded once more in response. "You reaaaaally want them?" Kero once again, with even more enthusiasm, nodded in response, his eyes wide with anticipation.

"Well then, you can have 'em!" The yoshi rather abruptly lifted his remaining foot off Kero's gut, dropping his swimwear adorned rump down onto him with a mighty heavy thud! Causing Kero to be at a loss of breath for a moment before both of those paws were suddenly shoved against his face, making his ears perk straight up, his body tense, and begin to shiver with insurmountable joy. "H-Hee!" Kero squealed with joy before hugging those paws, rubbing his cheek and nose against them.

"Hey hey now!" The yoshi retracted his feet to Kero's nipples and shifted his weight forward, the shadow of his large nose looming over the bunny's head as he smirked. "If a weird paw-loving bunny boy like you is going to have fun with these lovely feet of mine, you've gotta agree to a few terms first, got it? You're going to be my loyal paw servant, and you're gonna do what I tell ya to, when I tell ya to do it. You're gonna tend to these paws for as long as I want, 'n you're gonna like it, and you're going to start by showing me just how much you love my perfect paws. You got all that, servant?"

Kero blushed brightly at the offer, which was far more like an order than anything else. As he began to think, the yoshi pressed his plump toes against his chest, teasingly grinding his feet over him to show him what he could be enjoying. The temptation was far too much, and Kero's head was filled with nothing but thoughts of those wonderful paws that lay before him. Without missing a beat, Kero blurt out "O-Okay, y-yes please!" Before holding his paws up to his chest, almost in a begging position.

The yoshi sighed and rolled his eyes before once again stuffing a foot into Kero's face, smushing the bottom of his foot against Kero's fuzzy, white cheek. "You only get the one, until you can prove yourself, my little paw slave. Now get to work, 'n show me just how much you love working for me." Kero eagerly brought both of his hands up to grab at the paw, caressing it's sides and rubbing over it as he began to worship that lovely foot that had been so kindly given to him.

Kero started smooching at the bottom of the large paw, running his button nose and plush cheek against it as he reveled in every second of pleasuring that paw. "You're doing good, but you could be doing much better. Give my paw a bath, servant. And when you've finished with this one, you can begin on the other." Kero's already blushing face flushed red at the order as he gave a jittery nod, hardly able to contain himself at this point as he opened his maw softly and lolled out his tongue a little.

After a short time Kero pressed his tongue against the sole of the paw, slowly slurping upwards from heel to toe before repeating the process slightly to the right of the first lick, once the sole had been slurped clean, Kero began to delightfully lap some more, stuffing his face into that cyan dream of a paw, eyes closed in delight before the yoshi snickered and stuffed his toes into the bunny's maw.

"You missed a spot, hehe." The yoshi snickered as Kero suckled on those plump digits, lapping between them as he held onto that paw, wanting to lap over those rotund digits all day long. After some time the yoshi deemed the paw as clean and pulled it away from the needy bunny, who whined at being pawless before the second was swiftly presented to him via being shoved in his face.

"Don't worry, that was just the first one, you've still got plenty more to come." The yoshi gave a toothy smile before pressing down on Kero's face with his bare, plump paw. grinding his sole over his cheek and lips, happily using his face as a door mat. "Your face works much better for this than your gut does, I'll have to do this before every cleaning from now on!" He laughed, and Kero grabbed that paw stomping over his face before eagerly slurping it's underside.

Lapping and running his tongue over the large cyan swaths of paw that filled his vision, rubbing, and groping, smooching, and slurping all over them before the yoshi suddenly shifted on top of the little servant bunny. Standing up once more, one paw on Kero's chest with the other diagonally across entire face, bearing all his weight down on top of the poor bunny's head. "Now then, it's getting pretty late and I'm getting kinda hungry.

"We'd better head home, and since you're my paw slave now, I suppose I'll be coming over to your place. If you make me dinner I might just let you play with my paws again, and oh by the way, I'll be walking home barefoot." The yoshi chuckled and grabbed his sandals before stepping off Kero's middle, then his face, strolling over towards his car as the bunny was absolutely speechless. Dazed from the surreal experience that had suddenly befallen him until he was awoken from the daydreaming by a demanding call from the yoshi, tapping his foot with his arms crossed, standing near the door of the car.

"Get your fuzzy butt over here and lets get moving!" Kero clambered to his feet, scooping up his towel, and grabbing his umbrella before eagerly running over to the car, and his new paw pal. Happy to do a bit of cooking to play with those lovely yoshi paws once more. 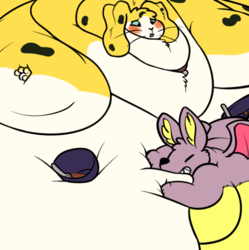 Commission for my good friend: Kero

Where he finds himself in a rather interesting meeting with a rather rude yoshi dude.
This is the first time I've ever written a story involving paw play, but it was interesting 'n fun to do~ I hope you all like it!