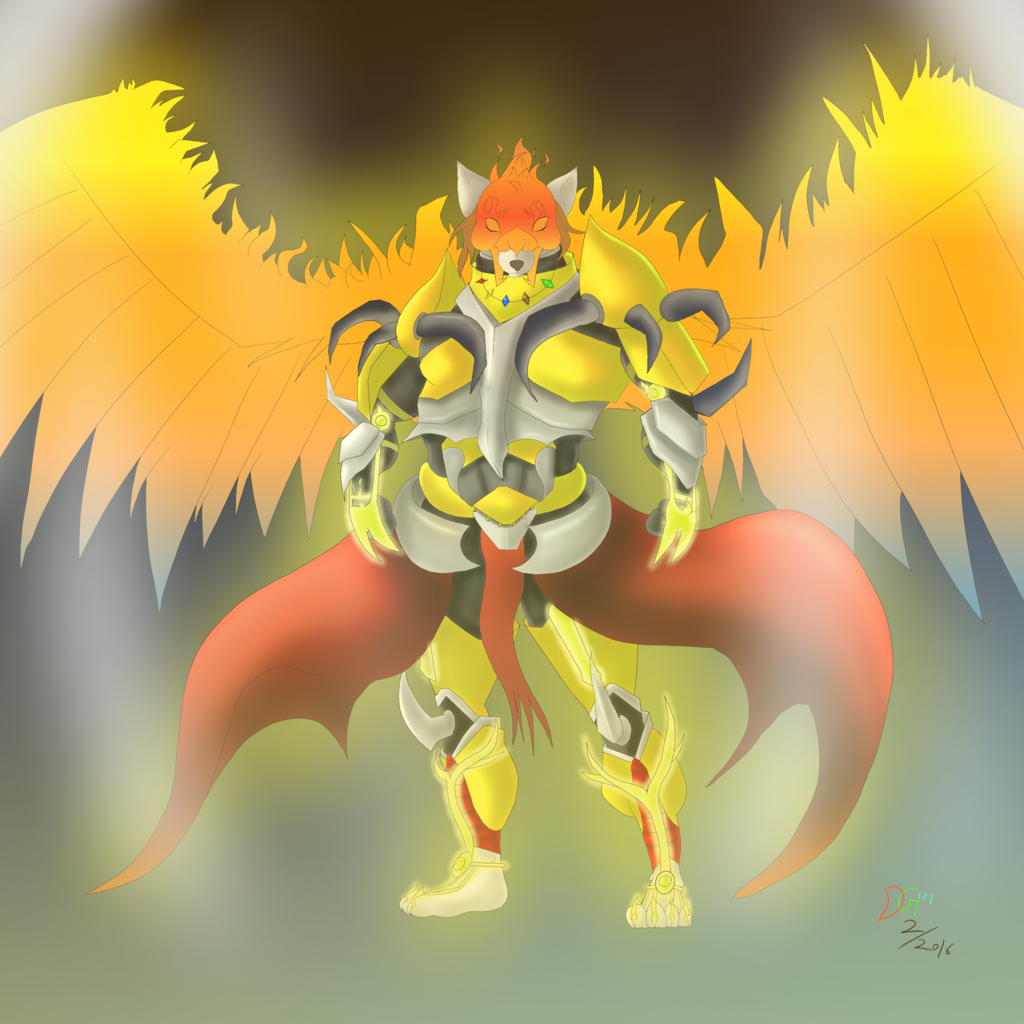 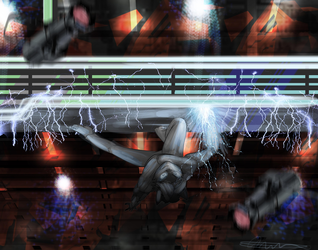 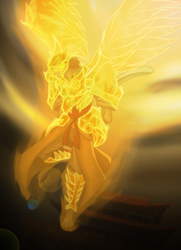 Here is a more solid-looking rendition Rinji's ultimate defensive technique in all its glory.

Please keep in mind that Rinji does NOT exist in the Naruto universe. He merely possesses certain traits from it. But Rinji is ultimately my own creation.

In this form, Rinji wears Susanoo like an armor. It takes on the appearance of a phoenix, drawing upon the actual phoenix spirit within him. While it may look like significant parts of him are still exposed for what is meant to be an absolute defensive technique, that fainter aura registers as solid to any physical impacts. Is it impenetrable? No. While it can nevertheless withstand blows from opponents far stronger than he is; if the blow is hard enough, it can still break through. The actual "phoenix armor" portions, however, are almost indestructable. Only characters with demigod strength or higher could possibly overpower it through brute force. Usage of Susanoo in this form has its share of advantages and disadvantages.

On the plus side, unlike the gigantic full body Susanoo, this one allows Rinji to retain his full range of movement and fight like he always does. He remains a difficult target to hit and best of all, the wings enable flight for additional evasion. He can also selectively manifest just the wings for only that reason if he wanted to. And while the chakra demands for this form are higher than the giant fullbody version, the chakra demands for his other ninjutsu are lower thanks to the power of his eyes. Even so, the additional usage of ninjutsu still contributes to the overall usage of his chakra, so regardless he must use each technique sparingly and with confidence that it'll hit its target.

On the downside, that despite being smaller in appearance, it actually demands even more chakra than its giant counterpart to maintain. The fact that his whole body isn't covered in the more resistant armor is because the chakra demands would simply be too much, even for him. He would literally be completely drained in barely a minute, even at full power. The orange aura portions, while not as tough, uses a significantly less portion of Rinji's chakra to maintain the overall form for several minutes at a time before his levels eventually run low. And though it does grant him heavy protection from physical attacks, he's still subjected to the laws of physics and as such can still get knocked around from a strong enough direct hit, regardless if it hits his Susanoo or Rinji's body directly. And also, unlike the giant version, this one does not produce any metaphysical weaponry for added offense. In this case, Rinji relies on his sword or kunai for weapons.

Despite the higher chakra demands, this is Rinji's preferred Susanoo form for the reason that it lets him use it both offensively and defensively simulatenously. The wings alone require much less chakra to manifest, and thus he can sustain them for a couple hours per day before he becomes spent.

In addition to having a strong defensive technique, Rinji also possesses one of three sacred treasures, each with its own incredible power. To possess all three would make the user invincible.

One is known as the Sword of Totsuka, or the Totsuka Blade. Unlike a regular sword, the so-called blade of the sword is like a fiery liquid within a sake jar that can shape itself when brought out. This blade is enchanted and can seal anything it pierces, drawing the victim into the jar into a world of drunken dreams for all eternity, never to emerge again.

The second is known as the Yata Mirror, an ethereal shield that is absolutely impenetrable. It is endowed with all five elemental natures, allowing it to alter its characteristics to negate any form of opposition. Any known attacks, whether physical, ninjutsu, or genjutsu are all repelled by this shield.

And then there's the Yasakani Jewel, which Rinji specifically possesses. He who possesses this jewel and is able to tap into its power becomes able to use not only all five basic elements, but also any combination of elements as well, including elemental kekkei kenkai, kekkei tota, yin, yang, and yin-yang chakra, depending on the user's knowledge and experience.

During the early uses of this jewel, the additional chakra demands from it were such that it reduced Rinji's time with Susanoo to only a handful of minutes. Over time, he learns to harness it better and increase his time more, though still not to the level of time with using Susanoo alone.

In light of the picture already being done; I decided to just shoehorn in the active Yasakani Jewel myself with a little experimenting. I got a couple opinions and they say it looks good. I also added a glow to the visible phoenix eye over Rinji's face, but still leaving just enough opacity to see Rinji's own eyes. Hope you like!

Between Susanoo and the active Yasakani Jewel, this is Rinji at his most powerful. He does NOT mess around when using this!

Art by downgrade101
Rinji Pantera by Me