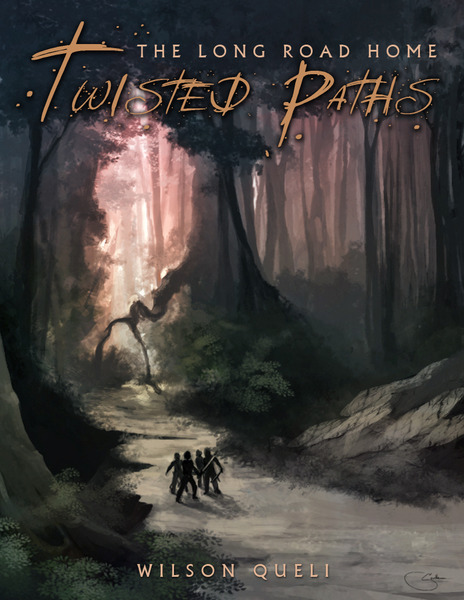 Kaelin heard the snarl behind her and the thump of paws on snow and knew she wasn’t fast enough.  Her fingers clawed at the cloak she had formerly been clutching close, flinging it aside.  Beneath a strap of leather held three carefully rolled skins against her back.  Blindly she grabbed the one easiest to reach, tearing it free of the cords that held it secure.  There was a roaring growl behind her and the wolf’s teeth caught in the edge of her skirt, tumbling her into the snow.  She kept her grip tight on the pelt in her hand, twisting around to face her attacker, floundering in the powdery white snow.

They had passed the edges of the hamlet, facing each other on the skirt of virgin snow that separated the hovels from the fringe of the woods.  The wolf advanced, lips quivering back from yellowed fangs.  As he leapt at her, Kaelin lashed out, feeling her boot strike him solidly in the muzzle.  A flash of satisfaction warmed her at his pained yelp.  She scrambled to her feet, noticing a few of the men from the hamlet were running towards them, armed with what farming implements they had on hand.

“Stay back!”  She yelled, flinging out a hand.  They slowed, hesitating, and it was all she needed to turn and run, aiming for the darkest part of the forest she could reach.  She didn’t want the wolf to hurt them, and she wanted to be far enough away that they wouldn’t hurt her when they realized what she was.  Throwing the pelt she’d unrolled over her shoulders, she felt the runes scribed on the inside of the skin as though they glowed with living heat.  The magic burned through her clothes, her blouse and skirt falling from her as the skin stretched and distorted.

She stumbled as her bones crunched and gave, one instant human, the next not.  She tumbled into the snow again but this time felt the cold only distantly, warmed by the heat of magic.  The change was complete the next instant and she leapt free of the deep snow as a lithe white fox, bolting into the shadows of the woods.  The familiar smell of pine and frozen streams promised safety to her.  Hearing the wolf regaining its feet behind her, she flattened her thin body out and stretched her limbs for speed.

In the woods, she knew she could beat him.  Kaelin had lived in this area for years, and more than that she had been chased here before.  Granted, it had been by common men and guards, not another skin thief like herself.  Kaelin didn’t have time to weigh her chances though, only time enough to pray as she ran that she would be clever enough to avoid death yet again.

By the time her muscles began to ache and her lungs burned from the effort of the sprint, she realized the forest was quiet around her.  There were the small winter sounds typical to the wilds, but the sounds and scents of pursuit were gone.  She slowed to a trot, breath huffing through her narrow muzzle and sides heaving.  The woods were strange around her, towering giants that suggested she had run deeper into the woods than she intended rather than staying in the eaves of the woods.  She doubted her pursuer had followed her so deeply, but a new fear crept up in her.  She should not have come so far.  Quickly she oriented herself to the scent of frozen water, different than the snow that sifted down through the branches around her.

Dressed in her coat of winter white and to most eyes nothing more than a clever fox, Kaelin felt a bit safer than she would have walking in these woods on human feet.  Even so, there was a quiet watchfulness to the trees that unsettled her.  Following her nose, she came to the edge of a massive clearing that in summer must have been a lake.  Now it simply allowed her to see the sun high in the painfully clear sky.  Knowing she had entered the forest a good deal south of her closest den, she set her course north- directly across the lake.

Tentatively she stepped out onto the brightly lit snow scattered across the top of the frozen lake.  There was no movement, hardly even a breeze to stir the boughs of the trees looming like disapproving guardians over the tranquil space.  When nothing bad happened she relaxed slightly, picking up a hasty trot.  Even though it seemed safe enough, she didn’t want to be out in the open and exposed for too long.

It wasn’t until Kaelin was nearly halfway across that she discovered her mistake.

This is an excerpt from my first published novella, Twisted Paths. It is the first in a trilogy with the second book slated to come out in the next month or two.

You can find it on Amazon here: Twisted Paths