Harper and Viola by Revo 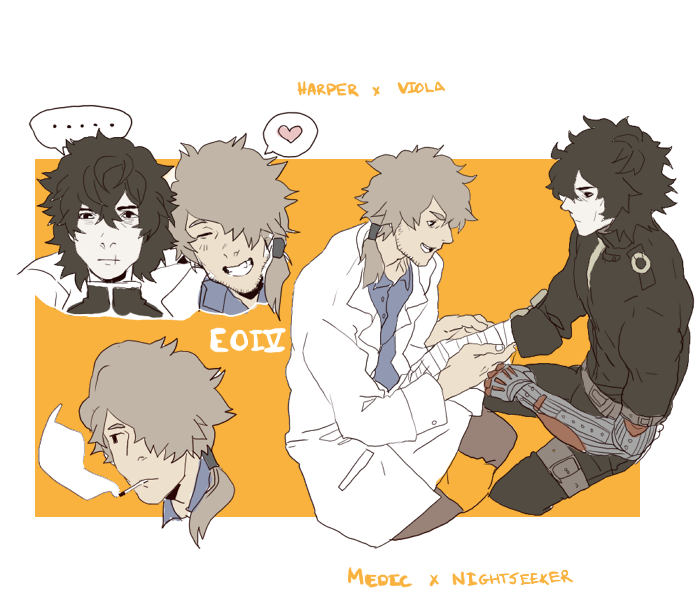 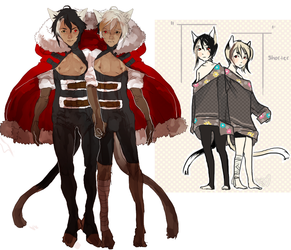 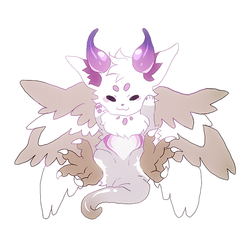 my nightseeker and medic in eo4....

tends to have a very flat affect; even if he were talking about a particularly emotional event he sounds as if he's speaking about something unimportant or unrelated to him

was a soldier on and off active duty for about a decade. he has compartmentalized a lot of his experiences and as a result feels detached about his actions or things that happened to him during this period. if forced to confront any of it he becomes progressively emotional or aggressive, eventually culminating in uncharacteristic violent outbursts.

the only person who knows him from this time is his partner harper, and because they share the same experiences he is the only person viola feels completely at ease with, as feeling he has already seen the unpalatable sides of himself and so he has nothing to fear/hide. he also feels that his deteriorating physical state is just, and reflects the gravity of his past actions.

despite evidence to the contrary, viola doesn't have suicidal tendencies and even at his most emotionally drained he feels it would be pointless to harm himself emotionally or physically. he allows harper to continue trying to slow/curb the effects of his curse and sets himself upon the path of a nightseeker, who are skilled wielders of throwing knives and poisons, in order to make a living. his curse has imbued his blood with properties toxic to most living organisms.

that's a lot of heavy stuff but it's not at all the forefront of his personality. at face value and to anyone who knows him he's a quiet guy with some weird quirks(ie he dips most foods in his drinks, milk preferably, before he eats it), but he's reliable and keeps his guildmates out of trouble. he's protective of the his guild's fortress, a boisterous and loud girl who tends to act before talking. whenever she says or does something out of place he taps her on the back of the head.

other things... he was cursed by a hexer on the battlefield many years ago. normally curses are used with the intent to cripple for short periods of time, but the curse viola was afflicted with has caused his physical condition to deteriorate slowly for years. he has already lost an arm to it. he asserts that he'd never met this hexer before the incident and can only speculate as to why he specifically was cursed so strongly.

he's fastidiously clean but he only has two or three sets of clothes... he's very particular about what he wears, not because he's vain but because he only likes wearing clothes that feel worn in.

he has a strange gait and some symptoms of ocd. his favorite passtime is sleeping and he often falls asleep when he's engaged in something that doesn't require his undivided attention.

he was an alchemist in the past and his knowledge of chemistry has aided him in his work as a combat medic. where viola is slow and silent, harper is quick-thinking and and outspoken. he's usually the one who drives his and viola's moves. he's kind and knowledgeable without being naive. he's wholly aware of people's tendency towards evil but he believes that man is primarily good and he genuinely wishes the best for everyone he meets.

as a soldier he was self-righteous and violent, believing his cause to be right and viewing the world in terms of black and white. he used to be very by the book and kept himself physically neat and orderly. The only habit he maintains from those days is smoking.

he has been with viola a long time and they share many of the same demons. he hopes that they can earn enough money in tharsis that they can set aside money for a small home so that he and viola can live out the rest of their lives, with viola suffering as little as possible.