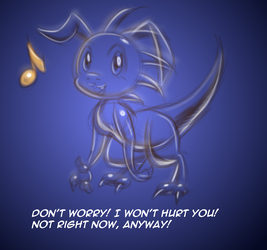 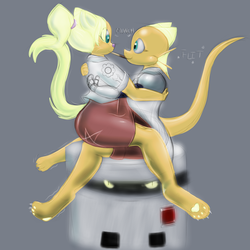 BTCT is also my new long term project. Since there's not money and contracts and licenses involved, it shouldn't crash and burn as hard as my last two years worth of effort. It'll just be a lot slower.

But if I DID have infinite time and money to hire help from people who are good at the art styles I want, I'd love to get some kind of hybrid between the greyscale visual aesthetic of a Gameboy Pocket's spritework and the Playstation 1 early version home menus and janky early 3D graphics. Like, if you've seen Sonic Robo Blast 2, imagine mashing that up with something like Disgaea or Front Mission 3 and then stripping most character art to 4 color greyscale and you've probably got close to the right idea. That OUT text should have a rainbow splatter behind it, but I'm not bothered about spending the time to figure out how to make the effect.

The lore here is that Bitty is a normal organic Squee Helibuster so they have all of the floating, bouncing, size-changing, pinning-oriented build of their kind but also have the same INCREDIBLY DANGEROUS REACTION TO FIRE.

The orbs used to control the status systems for registration are standard SHELL orb computers. Like your whole IoT gimmick, they're all individual computers responsible for handing their own portion of a larger operational system via internet communications. Wasteful and impractical, but having them float around and glow too just looks fun and cool and is totally in the Squee aesthetic playbook.

The entire idea beyhind the Sponsor system is that it's a metaphor for the meta-dynamics of people who make artwork / games / stories / music, the things they're creating, and the people who consume them and make fanwork based on them. One of the most common metaphor structures is to compare these creations and their creators to gods. Except, I don't like the idea of people thinking of themselves as gods when they're just as infalliable, flawed, and able to be destroyed as any other person thing or idea.

Canons contain Character, Places, Things, Ideas, Concepts, and Lore which embody it. Freedom Planet would be considered a Canon. The events that happened are the lore. The locations are places. Crystal petals are items. General Gong and Torque would be considered Characters. Team Lilac probably would be too (though technically their Sponsor should be ZiyoLing who still owns those characters). The Spectrum Chasers would be Concepts/Ideas. Petal Crash and its own associated content would be its own canon.

Any Character or Concept can have a primary canon and multiple Sub-Canons. Freedom Planet 2's Lilac would probably include Freedom Planet 1 as subcanon, since all of those events would be held as truth for her.

When a fan makes their fan-character based on another character, that fan is the Sponsor and creating the character is "Recruiting" the new character into existence. Since the fan does not own and has no permission to modify the Freedom Planet Canon, they would need to make their own canon to put the newly recruited character into. We could name the new Canon "No Pants Allowed FP Alternate Universe".

So the fan Recruits the new character "Katlyntine / Bottomless Corazon Tea" into the canon "No Pants Allowed FP Alternate Universe" and their subcanon is chosen as "Freedom Planet 1" because for whatever reason they liked the things that happened in that game but want to ignore what happened in Freedom Planet 2 or something. They can create whatever lore and whatnot they like to. Even give her a gun and rocket boots and ALSO A ROBOT ARM.

Ultimately all of these characters get together and fight eachother or help eachother out or take on whatever other arbitrary missions for the amusement of their Sponsors and Fans to build up Notoriety and Popularity. More popularity means they get access to more options for missions/quests/adventures/items/customizations/etc.

There's not exactly a clear end goal in sight other than sponsors wanting to keep living and making cool things. So people just kinda put together their Canons and Parties and play around with competitive tournmanets or something.

At least, that's my current thoughts.