The Grading by Renwin 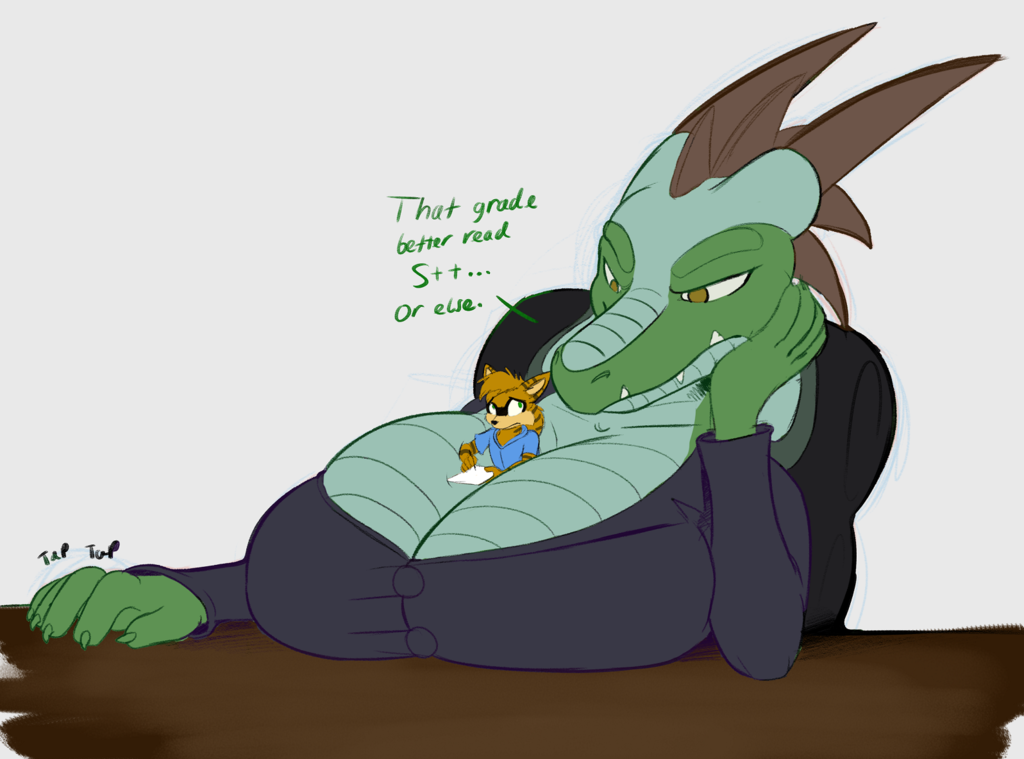 Most of the times, I really love this job. Helps with a woman's behind and I tell them how to improve it. The worst I got was a few yanks in the mouth, but nothing extravagant. But for the most part, love this job. However, there was this one moment that would've ended not only my job, but even as far as my life. My next client was a super tycoon known as Anita, and I heard of this dragoness ruling her empire with an iron fist. Any form of imperfection from any of her employees were oust in the swiftest manner. With no choice, I was invited because her previous bust inspector was..."inadequate" for the job and she mentioned she would be "greatly upset" if I was to refused her offer. It didn't help things that it was my first time doing breast inspecting. Was I sweating bullets that day.

I eventually reached to her main office on the highest floor of her business building. Luxurious and large. Felt like a room to a large mansion. Even when I arrive to her desk, I couldn't believe her figure and height were the real deal. She was big in every single way. Obviously intimidated, I nervously present myself and she immediately tells me to start the inspection. I jumped in the air and turned micro-sized enough where she can still see me and and landed right between her scaly breasts. It took me a while to get comfortable and finding a focal point of her energy since her chest was pretty large than most girls I known to grade.

Every second of the procedure though, I couldn't help the feeling at the time to keep looking back at her because every time I did, all I felt was that dark, cold stare that could easily catch my breathe. Like it was it's own lie detector. Fortunately, her inspection was finished and I gave her the grade. It wasn't purely what she wanted, but it was very close to "S++" by one more plus needed. However, it was not over yet. She questioned if it was my first time performing a breast inspection. I would've lied, but she would insure my life being short if I did. So I was honest to her face and said yes. Instantly, she plucks me from her breasts area and hold onto her powerful view. All I could do is watch back in fear as she looks in my defenseless eyes of my honesty. My heart felt like it sank all away to the tip of my bushy tail. Even my lungs felt like they were running out of air I had the feeling it was the end for me...

Then strangely, she commented that I was telling the truth and place me back down on her desk. She pulls a drawer open from her desk and starts writing on the blank check. She gave me the large check and my face was to the floor of her desk when I saw the amount of zeroes after the two. I didn't say anything back but a "thank you". proceed to shrink the check with my powers and bow to her. She gave a little nod and pointed me out to the elevator. Before I reached the elevator doors, she told I could come back as an regular employee. I suggested I rather be a freelancer, but is willing to give her a free inspection if she wanted. She nodded as a quick agreement and mentioned she'll let me know as soon as possible. The doors closed after her words and my body just sank to the floor like rocks. Never in my life did I felt so much fear from looking at a woman's eyes. But hopefully, this will never happen again...

A quick little story of my raccoon Ren doing his first woman bust inspection on RoboMax's tycoon dragnoess Anita. Ren is force to do something new with a very, non-lenient client and literally dodges the bullet from her due to honesty. She doesn't like the truth, but she hates dishonesty even more if it comes to her features. Which is the reason why the previous guy was "fired" due to being incompetent, compulsive liar and a pervert.

Fun fact: He did told the truth, but her bust was actually S++. Which is why she asked if he was inexperienced. However, she won't be easy at all on him next time since he will be a lot more experienced.