The construction site by reedman

Decomi was glad the work day was almost done. He was getting eager to start his weekend. He had at least a whole season's worth of anime to get caught up on. He had his favorite four cheese pizza stocked up, alongside his favorite soda. He just needed to focus on getting this last report filed. All it needed was a few data points and a pie chart. The raccoon's fingers were flying across the keyboard.

"January's expenses are finally accurate." he said. "Glad that Sales could finally learn how to count past ten."

With a click of his mouse, the report was finished. He just needed to print it, and show it to the boss. Then the weekend could begin. A distant whirring could be heard. He made it to the office printer with a quick stride. He forced the stapler to hold the ten page report together after he got the papers out. He made his way over to the boss' office. He poked his head into the open doorway. A lioness with brown hair pulled into a tight bun. Dali glanced away from her computer with a raised eyebrow.

"January's expense report is finally fixed." he said as he walked in, and handed her the report.

"Thank you." she said as she took the report. "I know you want to get home to start your weekend..."

"But?" he asked dejectedly.

"I just need one small favor." she said. "The new office being built needs some paperwork sent over. I know it's on your route home. I would send someone else, but you're the only one leaving now."

"Hmmm." the raccoon pondered. "Let me work from home Monday, and you got a deal."

"Fine." she said as she handed a stack of paperwork to him. "You just have to make sure the foreman Dylan gets this, and you're good to go home."

"You can count on me!" Decomi said as he walked out.

Decomi walked out of Dali's office with a smile on his face. While he still had to work a little longer, he knew he just earned himself a third day to get caught up on anime. He grabbed his gray jacket from his cubicle as he made his way to the elevator. A familiar gazelle was in the elevator as he walked in.

"Almost." he said. "Just gotta get this paperwork to the new office being built. Then my weekend begins."

"The new skyscraper being built not far from our apartment complex?" she asked.

"Well, be careful." she said. "Those macro construction workers can be such brutes."

"I pinky promise I won't get stepped on." he said with a wink.

The elevator dinged. The ground floor was his stop. He waved to Sheryl as the gazelle simply rolled her eyes at his dismissal of her warning. She worried too much. Macros in construction weren't nearly as bad. Some of those guys were pretty nice. Though the catcalling from some of them was a little much sometimes.

Decomi made his way through the parking structure. His car was realtively close. A perk of being in early. His car whirred to life as the key turned the ignition. He drove out onto the road. There was only one red light. The rest was stop signs. Most of the traffic in the area was gone. The construction in the area closed off a lot of space. Mostly for the macros in the construction area to walk around safely. Since he lived in the area, he was allowed to drive through.

It wouldn't be long before he saw it. A number of boots and denim jeans taking up his vision. A handful of macros stood around a building. They were putting the building together in big blocks, and the normal-sized workers welded it all together inside. Buildings got put up a lot faster since macros got in construction a few decades ago. The raccoon parked his car just outside the construction zone. He got out, and waved to a bull terrier in an orange vest that was stood by the entrance.

"Hey." Decomi said. "I got paperwork for Dylan from the office."

The bull terrier reached into the box next to him. He pulled out a vest and hardhat. The raccoon put it all on. The construction company's policy on outside paper was to to hand it to the person directly. He wasn't gonna argue it, as he's done it before. He looked over to the bull terrier, who was saying something into a walkie-talkie.

"Telling the macros where the next building block is gonna go." he answered. "He won't be down for a minute. Looks like I'll have to send you up. Your ride is coming in just a second."

Before Decomi could ask, the sky darkened. He looked up, and was swept off his feet. He landed on something incredibly soft. It looked like a massive hand in a glove. He had no time to process, as the gravity suddenly increased. The macro was lifting him up. It was a rough few seconds. He always hated when the macros did that. Some of them had no idea how to handle tinies. After a moment, things slowed down.

Decomi looked up. He saw the macro that picked him up. Seems there was a new worker at the site. A vixen. He didn't know macro women had been working here. He stood up.

"I'm from the office, I got paper work for Dylan." he said.

"Sure thing, cutie." she said as she looked over to one of the familiar workers, a macro brown husky. "Hey Phil, where's Dylan?"

"I just put him on the ground for lunch." he answered.

"Could you put me back down please?" Decomi asked.

"I could." she said. "However, a little guy like you look much cuter up here. He won't be gone too long. Union lunches are only an hour." 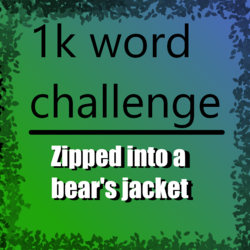 A simple idea. I wanted to draw out the ending, but I hit the 1k mark before I had the chance. Oh well.

Didn't beat my previous time, but I'm still happy with the result.