1k word challenge - Zipped into a bear's jacket by reedman

Hank wasn't sure why his car decided to die. Especially in a blizzard in the middle of absolutely nowhere. The nearest gas station was two miles away. It didn't help that the man had no winter clothes packed. All he had was his jeans, and his light jacket. His car never died on the trip, so he always had his winter clothes stored at the cabin. Helped with a lack of storage space at his condo. Not helping now however.

His feet had to be frostbitten. He was sure his fingers were befalling the same fate. He was as cold as can be. Trudging through the snow while his face was mercilessly beaten by the cold. He was shivering enough he could hear his teeth chatter. He wasn't even halfway to the gas station. A part of him considered going back to his car. If he could see it anymore under all the snow that most likely piled on it.

His cold thoughts were cut short by the sound of boots crunching through the snow. They were coming his way. He was unsure who it would be in a place like this, but he was in no position to deny any help they might give.

"H-H-Hey." Hank muttered through cold lips. It was barely audible through the noise of the howling blizzard.

It was a blessing. Whoever it was, they heard him. The young man did as he was told, and stopped. What little warmth came from the movement was rapidly dissipating. The crunching of the snow was getting closer. Hopefully this stranger could help this unprepared man. The figure finally came into view.

It was a bear. A very big bear. He had big black boots on. Hank could easily stick both of his legs in one boot, and they would go up to his knees. His waist was at eye-level. The bear was wearing a thick wool jacket that was covering a massive belly that kept the jacket tight as a drum. The bear's face was one that said he ate well. Cheeks that looked soft enough to grab by the handful. Despite his intimidating stature, his smile was soft. His voice was deep, but jovial.

"There you are." the bear said. "I got called by your insurance company. I own the tow truck at the nearby gas station. Not many places out here to get stuck, and not many humans out here at all. I'm Grant."

"Well Hank." Grant said. "The gas station's another mile. My cabin's a little bit closer. We can wait out the storm if you want."

Hank tried to open his mouth. He was so cold, his jaw muscles were struggling. The bear saw this.

"Seems the first thing we gotta do is get you warm." the bear said. "Humans ain't built for the cold. Small guy like you, I have an idea."

Hank watched as Grant unzipped his jacket. Right there in the middle of a blizzard. Protruding pectorals were exposed, followed by the upper half of a sagging belly compressed by the jacket. The bear bent over, and put his hands under the young man's armpits. He was lifted into the cold air. His human body was far too punished by the cold to do much in matters of protest. He saw his legs be guided in as the bear slowly brought the human's body into the warm confines of his jacket. Hank could feel his legs sliding past the foam-like softness of the bear's gut. Soon followed by his waist. It wasn't long before the bear pushed down on the man's shoulders.

Hank didn't care that his arms and legs were wrapped around the big belly of a bear. Squeezed between the wool and the bear's fur. A wave of heat crossed his entire body. The only part still cold was his shoulders and head. His head was resting on top of the belly. The pectorals hovered in front of his face. The bear's build was defintely of the musclegut variety. There was a lot of softness, but a lot of buried muscle to match.

"There we go." Grant said. "One human warmed up. Now to seal you up, and we can go to my place for the night."

Hank couldn't move around much in his tight confines. A soft, but powerful hand pressed him in deeper a little bit. He could hear the zipper being pulled. Now he was trapped in total darkness. Arms and legs wrapped around a bear's belly. His face mere inches from being buried in a bear's chest. He couldn't feel the cold on him anymore. He couldn't even hear the blizzard outside. Just the bear's voice, and his own breathing.

"You just focus on warming up, and I'll get us to the cabin." Grant said. "I should have some soup that finished cookin' by the time we get there."

It was always amazing how helpful these anthros could be at their size. Hank usually thought of their size as a minor annoyance. Especially when he would accidentally choose 'Anthro' size on his online clothes shopping. Getting a shirt big enough to use as a blanket was a cool novelty once. Now it's just annoying to go through the return process.

He wasn't sure why he was enjoying it so much. Trapped in this bear's jacket. Heading off to this bear's cabin. All of this was without his consideration. Any rational person would've said no, and gone to the gas station. However, Hank was blaming the cold affecting his thought process.

Although the bear was a little cute. Something about his sheer size, and how he was so gentle with him. Maybe heading to this bear's cabin wouldn't be a bad thing. He could be a real gentleman for all the man knew. The compromising position was something that the human was liking a lot 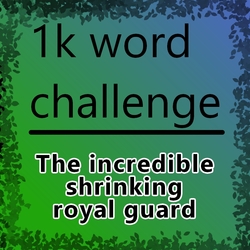 Quite proud of this 1k. Had the idea while chatting a buddy on Twitter awhile back

When I started this challenge a year ago, it took me almost 2 hours to do 1000 words. Now here I am.