My Dear Anna by Razgriz1032 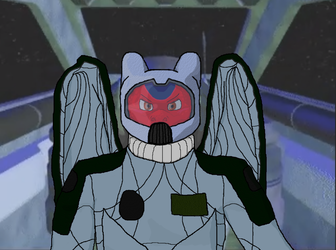 Meet Anna. Her full name is just Annabelinda. No last name because she dropped it due to complicated and dark reasons. She's a 20 year old female Western Anthro Dragon. She's got a bit of a tomboyish attitude. Obviously has a preference for no clothing. She weighs 145 pounds, is 5'11, sports a 12 foot wingspan and a 5 foot long tail.

She is Razgriz's mate and they have gone through hell and back again together. She's got some military training and is a good leader whenever Razgriz isn't around. She is a very fast flyer and is also a very good swimmer by swimming like a serpent. She has a special ability to sense the aura of living creatures and is a good people person in general. She can be irritable and despite her cute looks, she's a real fireball. She's got a quick wit, almost or maybe even faster than Razgriz, and a good sense of humor. She's also one of the rare kinds of people who can get up in the morning and not grump around.

She's also faaiiirly "excitable" and sometimes sneakily tries to access a particular area that Razgriz would rather not have accessed. Her personal quote in this situation is, "we have smooth and flexible tails for a reason."

She has a dark past with some blood on her hands, but she is trying to forget about it. She sees Razgriz living with the blood on his hands like it was nothing. She admires how he can act like a teenager, but then immediately switch to a leader.

Also is the mother of Mini-Raz. A picture of that cute little bugger is buried in the gallery somewhere.