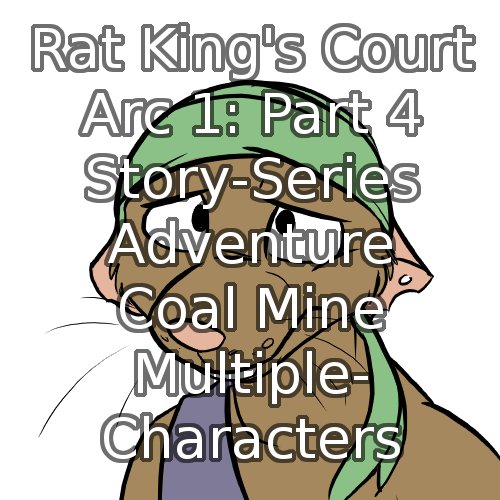 The roar of the waterfall echoed strangely above but this deep the powerful stream of water had lost a lot it's deadly force. It fell almost sedately down one wall of the shaft, kicking out spumes of spray to saturate everything. This of course made the path incredibly dangerous, the rocks were slippery and coated with black, oozing slime and once a circuit they had to pass swiftly under the course of the waterfall. It was uncomfortable, cold and filthy but Aira led the way, setting a cautious pace as they wound deeper and deeper into the depths. Orel stopped paying attention to the passage of time, there was a strange, almost dangerous monotony to their descent. He almost tripped several times and had to really focus to not drift off and start thinking of other things. He did trip when the path levelled out, stumbling into Aira the rat careened sideways, slipped on the wet rocks and went sprawling in the muck.

"Careful my friend," the cleric muttered as he did a slow circuit of the room, "The path is treacherous down here."

Sitting up Orel looked around, beady brown eyes squinting in the glare of the lantern. They were at the bottom of the pit, four tunnels spread out into the depths of the earth, neat, sturdy looking tunnels mined long ago. The remnants of the once mighty waterfall splashed gently into a deep, black pool that drained slowly down a fissure in the earth at one end.

"Is this the bottom of the mine? or just the end of this shaft?" Jay asked quietly, "I didn't see any other levels on the way down."

"There was one," Orel muttered as he stood back up slicking slime off his tail, "We skipped it, figured we should get as deep as we can."

"Was easy to sort of zone out up there, or just focus on the rocks ahead of you," Morty muttered, "I am not going to enjoy climbing back up that," he then tried to run a paw through his Mohawk but quickly gave up as all he managed to do was curl it into disjointed, knotted spikes.

"We've been going for awhile," Aira said walking over to the largest tunnel, "I suggest we follow these minecart tracks, get away from the damp and camp. "We need to eat and rest."

In the end they didn't have that far to go before the ground dried out and the humidity fell. The ancient cart tracks cut a surprisingly bright, silver line through the layers of coal dust that covered the wooden sleepers. Wandering deeper into the mine, dust stirring beneath their feet the party of bedraggled adventures slowly dried out themselves though not before the dust kicked up by their feet finished the personal coating of grime they had all picked up. Twenty minutes in they found a large open cavern, maybe twenty foot across, roughly circular with a ten foot high ceiling. There where mine carts scattered across the chamber, some on the rails, others fallen to the side or parked on the large wooden turntable in the centre.

"Big room, some sort of hub?" Jay mused, kicking one of the lumps of coal scattered across the floor.

Morty pulled on a tangled pile of wooden spars in a tub to one side and grunted as he met resistance, tugging on it firmly he squeaked as the whole lot jerked free. The iron tools once attached to the bottom of each handle had rusted into one solid lump. Cursing and staggering under their weight the dog dropped them with a huge clang atop the ancient rails and his foot. Hopping away, muttering under his breath the dog glared at the offending tools.

"Wonder why they abandoned the mine," Aira asked as he strolled into the centre of the area, "It looks like it was a pretty big operation and had plenty of coal left down here." the other shrugged at the fox in varying degrees of disinterest and the cleric sighed, "Well let's camp here, get some rest before we try traveling deeper."

It didn't take long to set up camp, they rolled out their bedrolls on a relatively clean patch of ground, sat atop their blankets and started to dig food out of their bags. Once they were settled down in a loose circle Aira looked over toward Orel and smiled, "Fancy... telling us about our employer? About what he did to you."

Jay and Morty sat upright, ears pricking as they looked toward the rat, Orel sighed pulling out a stick of jerky and biting into it savagely, he chewed for a moment then spoke in a quiet voice, "He's my Rat King... it's an old legend."

"What do you mean by your rat king? Jay asked softly, "I mean... you didn't know he was down here until his swarm of rats stole us."

Orel ignored Jay and just offered him some of his jerky and swallowed his own mouthful before biting off another chunk, "A rat king is a very rare rat, there are many legends about how they are made. Some say a rat king is born when rats in the deepest squalor bind together to survive. Others say they are born as regular rats and the swarm picks them, others say they are made when a rat nest polluted by magic is amalgamated into one beast, the King."

Looking around at his companions Orel picked up his tail, stroking his filthy hands along the scaled, pink skin, "No one can say for sure where they come from. Either way the key in any legend is the tail. A Rat King can absorb other rats through his tail, assuming their bulk and mass or release it again, changing size to suit. This magic also gives them total dominion of all rats, be they feral... or as you saw kin." swallowing heavily his eyes lifted and sort out Morty, "You saw how easily he dominated Morty here... that took effort, a spell, an overwhelming of will."

Morty squirmed and his tail wagged back and forth, "My mind isn't all that hard to break, I'm no Mage or Cleric with arcane training to protect it."

"Maybe not," Orel said, "But with rats there is no resistance, for my feral cousins he is all, his mind suffuses them, what they see he sees, they are him and he is them."

Rubbing at his neck awkwardly the rat turned to his arcane companions, "He offered me a choice, accept that he was King or he'd take me. He's a Rat King... that makes him my King, it's not a bad deal, I acknowledged him as King, we got to quest rather than be lunch."

"An oath taken under duress is no real oath, as soon as we finish his quest we can leave and not come back," Jay said, "You don't have to keep him as your king."

Shrugging Orel stretched his legs out before him, "He is the Rat King... I don't mind the idea of having a king, I'm a rat after all and he... well I'll cross that bridge later. For now we are serving him and if he pays well then he's not that different from our other employers."

"Aye, you guys try and sleep, I'll wake you in two hours Orel," the rat nodded and curled up in his blankets, Aira settled down as well and Jay stood up and walked a short distance away to patrol and watch whilst his friends slept. 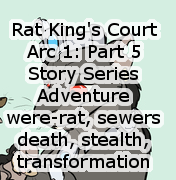 Back in the mine our intrepid adventurers have braved the depths and at last Orel decides to speak up about King.