I am Rathaloshunter16 or Rathy for short. I am traditional hobbyist artist from Deviantart who is posting her old art from there so sorry if some are terrible. I am writer in Archive of Our Own. I play Monster Hunter games too, other games are Skyrim and Spyro: Reignited trilogy too. 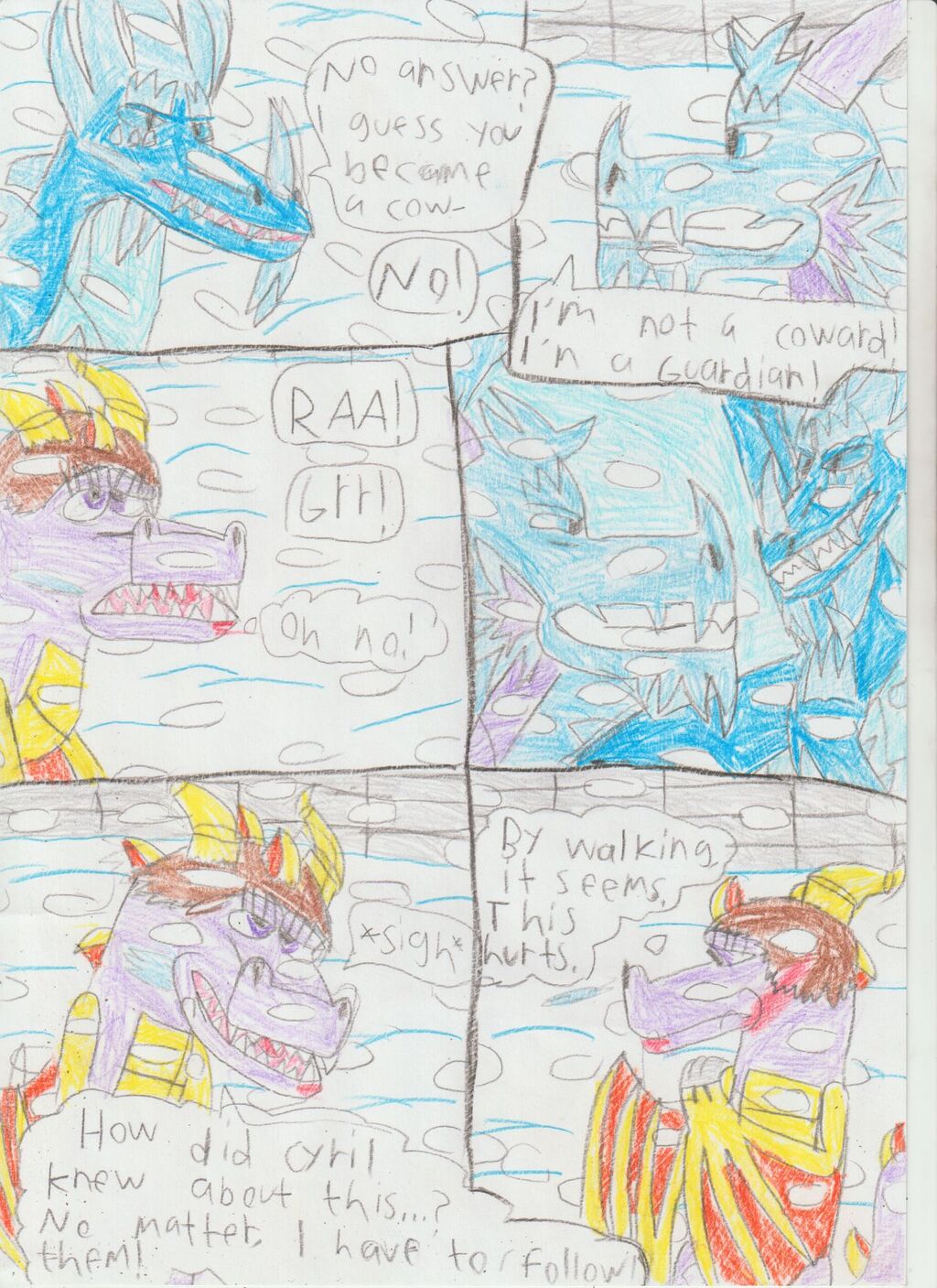 Dragon island is home to all dragons, creatures and old culture, now, I will list what there is and whatnot.

City and villages.
Dragon city: Dragon city is located somewhere middle in of main island, big city of dragons and other creatures, filled with culture. Dragon council´s home is located in Great Dragon Hall that is located in highest building in city. Tribes are located across the island. One of known cheetah villages is located in Valley of Avaral.
Places to visit.

Artisan home: Artisans are dragons who are fond to arts and crafts, along poetry and other literature. They live near warm Sunny Flight and Town Square and Dark Hollows that is acting as their library.
Leader: Nestor.
Elder: Astor.
Other members: Delbin, Tomas, Argus, Lindar, Gildas, Gavin, Albin, Oswin, Darius, Nils, Devlin, Alvar, Thor and Nevin.
Fodder: Sheeps, frogs and chickens.

Magic Crafter home: Magic Crafters are dragons who live in northeast mountain range, they are dragons who are more into magic than any other dragon. They live lower parts of Wizard Peak and High Caves. Alpine Ridge is in same level as their main area. Crystal Flight is located in other side of mountains. There is Druids too, but Magic Crafters ignore them mostly except if they start to cause problems to them.
Leader: Cosmos.
Elders: Boldar and Altair.
Other members: Zantor, Zane, Eldrid, Kelvin, Zander, Cyrus, Ajax, Cedric, Jarvis, Hexus and Lucas.
Fodder: Goat sheeps and sheeps.

Beast Maker home: Beast Maker dragons live near Paitini Swamp, they have unsettling look on themselves but they are soft just like others, of course they can and will fight if they feel threated. They live mostly below Tree Tops. Spending their time in Terrace Village and Misty Bogs´s murky waters. Wild Flight is located behind Paitini Swamp.
Leader: Bruno.
Elders: Damon and Zeke.
Other members: Cleetus, Claude, Cyprin, Rosco, Bubba, Isaak, Lyle, Jed and Sadiki.
Fodder: Chickens.

Stinger dragon village: Stinger dragons live in cave in Serangga jungle, they are dragons that look like wasps, bumblebees and bees, chieftain is only who has actual tail and pupils. Guards eat only meat while young future chieftain eats honey based food. They may look scary but they are kind just like other dragons. They make best honey treats and Serangga Brandy. Their ancestor was Honeybarb.
Current chieftain: Erregina Malab.
Healer: Pi Rahiq.
Elder: Malnin Pusojur.

Ant dragon village: Ant dragons live deeps under Serangga Jungle. They are mix of ants and termites. Chieftain being mix of both. Soldiers are termite like and ant like workers. Their ancestor was Carrierwing.
Current chieftain: Puawai Vaitaimi.
Healer: Sanker Arbeider.
Elder: Klav Gosvahklav.

Star dragon village: This village is very peculiar, it´s not located in island but far in space. In place called Cosmic Helligdom.
They live in solitary very much and they go to earth to die when old. They are seen as shooting stars, when this happens, Star Dust falls to Dragon island, this is used in decorations and clothing It´s said that two of their members Zella and Adrano created Celestial Moons. Star dragons too created Convexity. Their ancestor did live on island. Their ancestor was Startail.
Current chief: Kintana Nafasi.
Current healer: Piko Marama.
Elder: Ronah Fil Kahliir.
Known members: Wizard Alkunia Crescent.

Tarakona island.
Tarakona island is located in south from main island, in middle of island you get to all various locations, in north shore lies Luau Island. Near central is mountain area, high above stands Dragonfly Dojo, even higher is Cloud 9. West of island is taken over by Crop Circle Country, middle of central and south is location for Jurassic Jungle. East side of has Honey Marsh, at south from central is desert area with Thieves Den and at very south at high in cold mountains is great Monkey Monastery.

Animals.
There is many animals that live on earth too, deers, different birds, lizards, snakes, etc.... but there is some special cases aswell, Leaper Lizards and Moncaws, both can be tame as pets, Lizards are used as riderable creatures.
Moncaw can speak like people and are almost smart as them. Many animals are more intelligence due Leaftail´s blessing that he gave before he died, good example is Goldbeak, Eve´s pet bald eagle. Rainbow Bug is used to create more vibrant and colorful objects and are used in fireworks aswell.

Fish.
Island is full of regular animals but it has some special cases in fishes, Volcano Eel, Dragon Salmon and Dragon Bass.

Culture and food.
Dragons feast on Sanguinmen, made of cooked meat and boiled blood.
Dragon Soup is made of meat, Shifa Berries and dragon fruits. It´s spiced up with Rovento Mushroom.
Fiery Special is dish that is very spicy, meaty stew with Rovento Mushroom, chili, jalapeno oregano, pepper and garlic.
Dragon Shish Kebab is mildly spiced meaty kebab, using Sanguimen´s meat in dish.
There is two known patries they eat, Sweetfang and Owl Pie that is shaped like owl´s face.

When it comes to drinks, don´t except alcohol as dragons can´t get drunk.
They make Dragon Liquor from Dragon Flower and come in tastes.
Serangga Brandy is made of honey of Grand Flower and dragonfruit.
Wyvern´s Wine is made from venom of wyvern that is harmless and different fruits.
Avaral Ale is made from basic ale ingredients and Shifa Berries, minus alcohol.
Fire Dragon Cider is strongest and spiciest of them all, using Rovente Mushroom and pepper in it.

Their culture is vast and they can speak many human languages.

Dragon mates strengthen their bonds dancing, flying or mating as they are ways to be close each other and test their trust.
Dragons bond and mate for life most of time and families are very caring and can be multi-generational. Male pairs aren´t uncommon either and can raise hatchlings or eggs from Dragon Temple.

They pair up either regular dating or during mating season in Valley of Avaral. They engage offering crystal that is matching to scale color of that they will ask. Shards are removed from it and made to necklaces.

When dragon has died, they are burned in Dragon city, their ashes are thrown in wind, asking Windrider´s spirit to spread them across the island to give new life to nature.

Gods of light and darkness.
Atarangi, god of darkness is more known than Argia. He believed to be only a story, rather than real being that lurks in shadows, he is able to corrupt those who give into his tempations.
Argia, god of light is mere myth, not many speak about him but that doesn´t mean he is forgotten. He guards light and goodness in realm light.

Afterlife.
When dragon dies, they end to Dreki Dalur, endless valley with vast forests, high mountains and unlimited lands to hunt. In center is Hall of Feast where they feast and drink. But, worthy dragon may end to White Isle and take place as Chronicler. Some people who have deep connection to dragons end to Dalur instead their own heaven. Each time when dragon dies, new page is added to Book of Fallen.

Pray.
O ancestors, who made dragon and dragon´s open sky and gave me a dragon´s soul.
Dragon´s urge to to fly, let me dance within your cloudscapes far beyond earth´s chain, let me rejoice in my grandeur, let me not grow vain.
Let me vindicate my honor with my fang and claw. Let my raging heart show mercy, let that show no flaw.
Let me have the joy of all the shining gold I´ve stored. Let no pauper dragon go forth starving my hoard.
And ancestors, should the need arise and I be called to fight. Ancestors, make me victor and ancestors, help that who tries to win me.

Words of fire.
Feel the fire that flows through your veins.
Allow its heat to consume you and breathe with it.
Now, rise up and release the firestorm within you!

Words of electricity.
A flash of lightning is born of the and its tempers, you must learn to control your own emotions if you are to tame the free spirit of electricity.
Surrender to its erratic nature.
Allow its energy to charge through your body and anticipate its movement.
Then unleash it... willingly.

Words of ice.
Do not let fire control you. There are other elements at play here.
The power of ice also moves through you, just as the chilled winds whip through your wing. Let it.... expand!

Words of earth.
Be steady and use the power of the earth to feel your way.
The power of earth and nature is a mighty one.
For as the earth moves, so does everything in it, be mindful as you wield it.

Legend of dragon: Side comics