Soak and a Snack by RaddaRaem 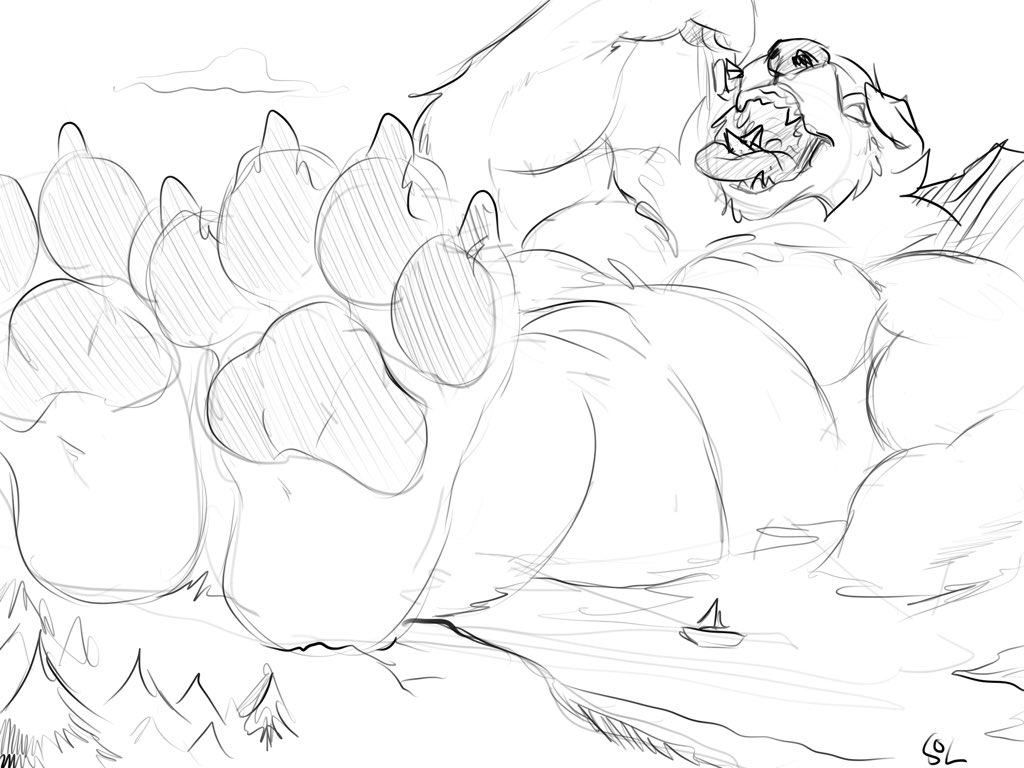 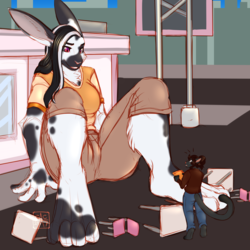 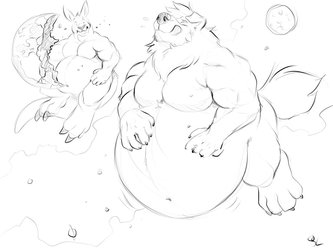 Soak and a Snack

Jem here is a hulking, huge, and very very hungry fella. What better way to laze a balmy summer day away then with a soak and a snack!

SolAxe draws absolutely amazing pictures. Particularly ones with an emphasis on vore. I keep on getting them and then writing words for them.

“I know it’s somewhere around here…” Jem trailed off. Dragging an arm across his brow, eyes shielded from the sun glowering overhead, the rough collie lumbered forward. The simple swing of his step was as casual as it was calamitous.

Gales of heated air, displaced by Jem’s broad soles, buffeted the entirety of the forest that had the poor misfortune to be in his vicinity. The pines that had stood tall and proud for centuries simply snapped apart at their bases. Little more than sawdust remained of the trees caught beneath and between the collie’s titanic toes.

Indifferent to the craterous paw prints left in his wake, Jem squinted. Snowcapped mountains, surrounded by shimmering bands of blue, all but blinded him. “There they are!” he barked with an excited wig wag of his tail. Acres of pristine forest, or what remained of it, was flattened by the act.

Yesss. Yes yes yes that was it! The perfect summer getaway on a blisteringly hot day. With a spring in his ruinous step, the collie’s thunderous and thooming footfalls drowning out the felled trees and shriek of birds, Jem jogged towards the horizon.

The sunlight shimmering upon the surface of the lake at the mountain’s base faded as it came into focus. To his delight, Jem was able to make out bits and bobs of brown, capped with little white sails, bouncing atop the water. “Ooh a soak AND a snack? Hell if I’m going to squander this opportunity.” Picking up the pace, Jem bounded towards his goal. Plumes of dust belched free from the parched earth every time the collie placed his weight down upon it. A fine dusting of clay came to coat his padded soles and toes as the muscles within them scrunched against the misshapen landscape.

Jem’s jaunt proved to be a brief one. In a matter of minutes he found himself padding up to the shore of the lake. White capped waves, in place of ripples, emanated out from the sandy shores while he splayed his toes. They viciously slapped against the sides of the fishing boats that now bobbed precariously on the troubled waters.

Flashing a toothy smirk, Jem waded into the ankle deep lake. The water level rose immediately in response and flooded the rickety docks set up along the shore. “Mmffff…” Sighing in relief, his breath misting into clouds along the mountaintops, the collie turned about in place. The churning water crashed against the drifting boats and all but threatened to sink them.

“Now to kick back and reeeeeeelax.” Dropping to his knees, the rush of air deafening the fishermen that remained afloat, Jem reclined against the mountain side with a deafening crash. His broad back ground boulders into dust and sent streams of snow and stone surging down its slopes. The collie chuckled at the waves lapping at his thighs, courtesy of the artificially induced avalanches, while he kicked his legs up before him and let his feet come to rest on the opposite shore of the lake. He nestled his mane of fur into the snowy slopes behind him as his heels sank into the sand.

Eyes half lidded, Jem dragged a hand through the frigid water at his sides and scooped up a handful of ruined boats into his vast palm. Sloshing them side to side within his grasp the collie’s lips parted into a toothy, and hungry, grin. Head tilted back, Jem creaked his jaws open wide and emptied his sea err… lakefaring snack into his gullet.

For their final voyage the fleet of fishing boats sailed down along the colossal canine’s undulating tongue, some crashing themselves against the pillars of bone that were his jutting teeth, before cratering into the dark and humid abyss that was his throat.

“Ahhh that hits the spot,” Jem hmmed as he scooped up another helping. Down the boats raced along streams of saliva, losing themselves in the folds of muscle that lined the colossus’ throat, or simply crashing themselves into the stormy seas that churned in his stomach.