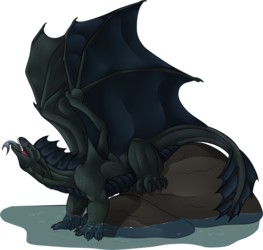 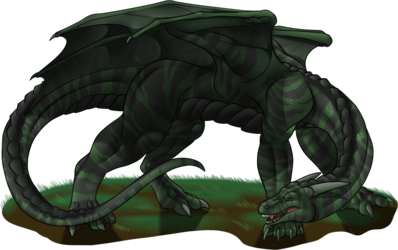 The Aezkul are the masters of Threa's skies. With their varying wing shapes and blue-and-white coloring, they prove over and over again that they alone can assert rightful dominance over the airspace of the world. Depicted here is but one of the three wing shapes; it is the least common but most memorable simply for its sheer size and proportions. Known as the 'Zier' wing shape, its shape allows the kul to zip over landscapes at speeds unmatched by any other in the world. The other wing shapes - Kra and Lan - cater to maneuverability and soaring respectively, with the latter being the most common.

The patterning and colors of the Aezkul vary wildly on race, of which they have three. The least common, but also most iconic, race is that of the Aezser, shown here. Their markings contrast the most with their scales since their base color takes up the darkest hues of blue. The Aezkiel are the middle tier of colors while the Aezrik are the lightest. Each race has its own specific marking that defines them, as well; this marking adorns their tailtip, paws, and the trailing edge of their wing membrane. The other markings, however, vary depending on the individual.

Biologically, not much else is notable on the Aezkul beyond their ability to breathe fire. They are only one of two species on Threa that are able to breathe a flame, and therefore also are one of the few to have flame resistant scales. Many thousands of years ago, the Aezkul split off from the Blazkul. They evolved to what we see today, but retained part of that fire-breathing ability the Blazkul are known for. However, most of the original space in their chest for this fire has been replaced by wing muscle, leaving them with much smaller fire capability.

Unlike any previously visited species of kul, the Aezkul are very societally and somewhat technologically advanced. They live under a republic style of government in the Aezrikka Zule, a mountain range that borders the desert. Nine dragons lead these kul in a council with many hundreds of underlings that lead cities and towns. They are experts in medicine and know the treatment for a wide range of ailments as well as complex forms of first aid. They also are renowned historians, having collected many hundreds, if not thousands, of years of written history. In fact, they invented the written language. However, these kul lack in most other areas of technology; they cannot figure out how to smith metals higher than bronze and are hopeless at more complex forms of agriculture. Most cities have large amounts of Aezkul assigned to hunting and providing food for the town. Some cities have learned how to keep and breed basic herds of livestock as well as grow a few herbs, but large-scale agriculture is out of their reach.

Due in part to the lack of agriculture, the Aezkul population is rather low. Only the Izkul and possibly the Truzkul have a lower population than the Aezkul does. More notably, two thousand years ago, a war broke out between the original three Aezkul kingdoms that spanned the mountains. It raged on for a thousand years and utterly decimated a large part of the population; assaulting fortified mountain caves was not the best for holding back casualties. Thankfully, their current cooperation and medicinal knowledge is helping their population boom once more.

The only thing stunting this population is the initiation rites that the Aezkul must pass in order to live in society. At age four, the kul hatchlings jump off cliffsides for their first flight. If they fall, they fail - and likely die. Thankfully, wings are usually developed by this age. Secondly, any Aezkul wishing to become an adult must pass another rite at eight, which requires the kul to make a new discovery useful to the Aezrikka Zule and return with proof.

Everything written here is subject to change at any notice.

This dragon should look familiar to you, unless you've been living under a rock for a couple years. This is the species that my sona belongs to; she's an Aezkiel with Zier wings. :)

I had so many sketches for this before settling on this one. Blegh