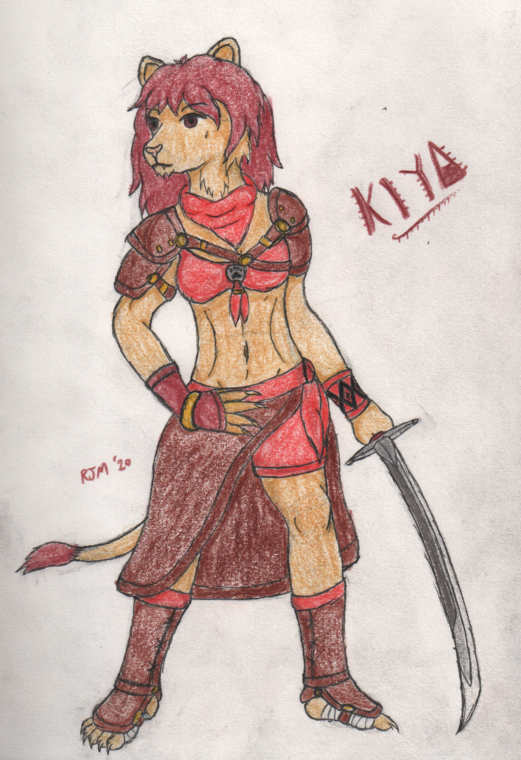 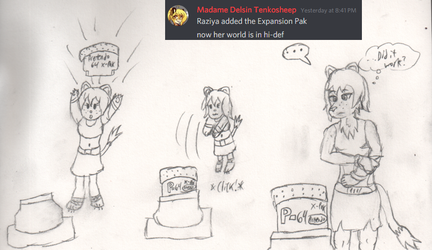 Kiya of Sirocco Pride. She who seeks to know the fate of her absent goddess Aralisi. Leonine. Gnollsbane. Barbarian.

One of my first Dungeon World characters, and one of my favorite tabletop RPG characters overall, reborn in a new picture of mine. The original reference, drawn early in 2019, wasn't great. At the request of my GM, of whom I've played for a year or so in vario0us games, I decided to put my new art style to good use. His DW game is one of the best I've ever played, so I gladly accepted the challenge to get myself back into art after a slump. The game is currently on hiatus due to a player whose new job has been hounding her, but I hope to see Kiya rise back up again.

Highlights of her adventure thus far? She took out twelve mook-level gnolls in her backstory (hence "Gnollsbane"). She burst out from a metal cage in her introduction session, enraged when an obese gnoll princess taunted her with wine, only to tear her apart unarmed. In doing so she escaped with a replacement for a prior player's deceased character, a goblin Thief named Ghekin (who is a veritable meme among the group). After she and Ghekin joined the heroes' party, Kiya wound up befriending a showman elf NPC (a veritable meme himself) named Tangren. She wound up suplexing a gnoll myrmidon who called out her self-appointed title, much to the chagrin of an elder diplomat of her people. In that same city, she also partook in a dancing competition and got runner-up; the team's human Immolator, Scarlet achieving a victory tie with a notable NPC.

Entrusted with a penitent NPC ally's spear, she survived a warrior of her people who, with an arcane metal axe lodged in his head, had been driven inside. After surviving the battle, she took on his JRPG-style claw gauntlets as a brutal up-close weapon. With our team's sapphic human Immolator growing more and more in love with her, she finally accepted her as a mate from their close experiences together. With our Fighter, now ascended to being a warden of the dream world against an eldritch entity, Kiya also protects Scarlet with fervor in her own. The context is that the entity is from a timeline that never was, who exploited the mental trauma of George the Fighter. In addition, Scarlet was resurrected in her sickly youth and became an Immolator as such... but the power of resurrection is disallowed by the goddess of death, one of few deities remaining in the world.

The last two highlights involve a play ghost-written by Ghekin and ran by Tangren, of which Kiya took on a starring role. With the world in danger due to the death of a king's heir (Ghekin's previous character, Mathilde the Arcane Duelist), the plan became to seek out Kiya's missing goddess Aralisi. While many gods vanished or died in a war that ended the world's Bronze Age, Aralisi was only thought injured and absent. Ascending a tower built to test the goddess' followers, Kiya and company found themselves in a primitive world that fire cannot be created within. Considering her deity's main epithet is "Aralisi the Fire", this gives Kiya pause and makes her girlfriend a prime target to be feared by its inhabitants. A centaur-turned-demon is hunting Aralisi, and may succeed if the team doesn't hussle.

The last session ended with a leonine warrior succumbing to poison in an attack on the tower; a weakened Kiya, barely surviving the toxin that felled her fellow, vowed before a statue of Aralisi to rescue her patron deity, and to butcher those who would destroy the world she loves.