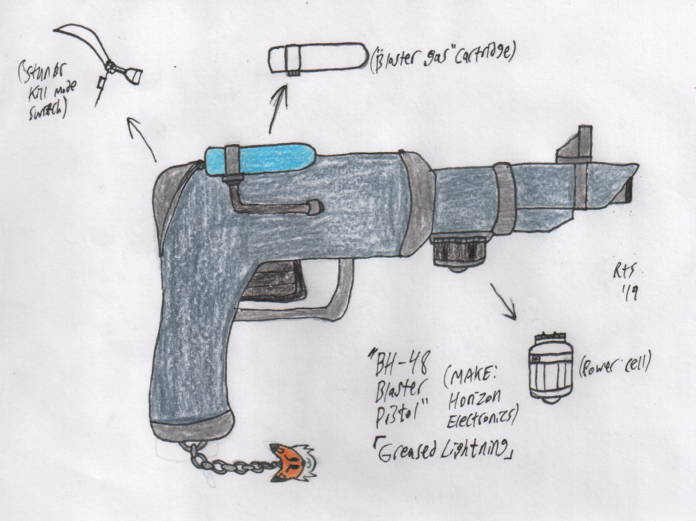 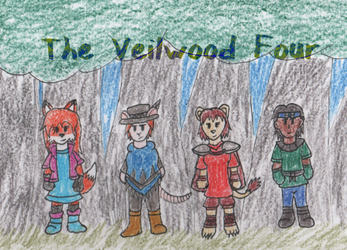 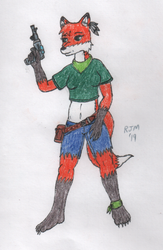 "BH-48 Blaster Pistol, produced by Horizon Electronics during the Age Before. A lightweight, state-of-the-art civilian blaster made of a slate-colored plastic. Possesses no moving parts outside the trigger, and is thus reliable compared to other energy weapons. Powered by a small, chargeable power cell; aether in a plasma state at subsonic speeds, tapping into a 'blaster gas' canister attached to the top of the weapon.

The back panel flips up to conceal a switch that toggles between a Stun or Kill mode. The former setting projects a ring of ionized cold plasma forth, overloading a target's central nervous system as if being shocked by a taser. This mode is usually non-lethal, with life-threatening results only reserved for the infirm or elderly. In addition, the ionized state of this cold plasma ring is also known to overload circuitry in electronics as well as living creatures' nerves.

The latter setting projects plasma in a condensed, streaking bolt forth; on contact with an object with enough mass the cold plasma bolt is agitated enough to burst into a gout of superheated plasma within a split-second, penetrating its victim with mild ballistic force before violently erupting. Victims of this supernatural energy blast suffer severe burns, and the surrounding viscera might dissolve into a bluish ectoplasmic goo, inflicting further bodily harm. A weapon of this size and power usually doesn't possess the power to melt down bones, nor cause a strong enough chain reaction to completely destroy one's body with a single shot. However, blaster weapons of greater power, such as the BH-53 Blaster Carbine and especially the BH-42 Plasma Caster, have a much easier time breaking down a victim into a puddle of bubbling sludge".

An in-depth look at Dana the Apocalypse Fox's main weapon of choice. Hers in particular is nicknamed Greased Lightning, in tribute to the 50's and 60's retro-future of the Fallout franchise. I have a tendency to equate Grease music with her apocalyptic misadventures thanks to Black Isle and Bethesda's post-nuclear adventures. :p