I Am The Wind... ♪ by RachelTheSeeker 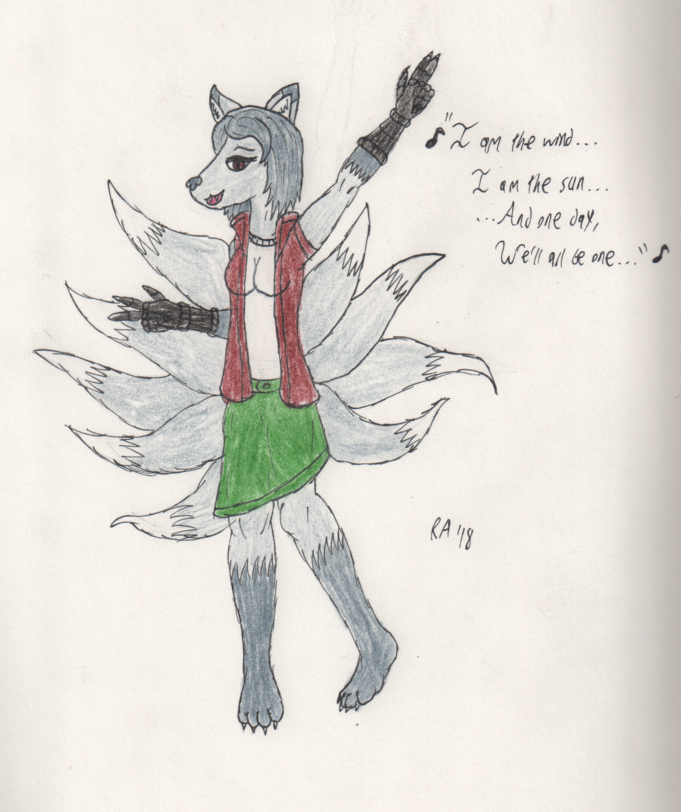 First off! Wanted to mention that the pose was taken from Senshi-Stock on DeviantArt. The specific picture can be found here -- http://fav.me/d16q2ns

Also, the description of this one is gonna be long-winded. Last afternoon prior to this picture's upload, an urban fantasy Pathfinder game I and my fellows were a part of for over a year had come to its grand finale. To commemorate what will probably be the most amazing tabletop RPG campaign I've ever been in, I drew up my character by the end of the game. Below, I will gush about the Bard herself, Sasha Marie Spencer.

Sasha began as a vague post-apocalyptic character concept in the past (maybe I'd posted her original art before, IDK). Throughout her journey alongside her companions, she's lost her hands to a malfunctioning pistol, and had them 'grown' back on in cybernetic-looking mitts that also gave her fur its current metal color. She's had a heart-to-heart as the team leader (the half-Drow mafiosa) levels with her against killing others, a moment I'll cherish out of character with the leader's player.

She got her throat ravaged mid-song by tear gas, and was challenged by a satyr exarch of a chaotic god of debauchery to a song battle; after winning, she obtained divine nectar that gave her all nine of the tails shown here and unlocked her true potential. Post-campaign, the GM's ending monologue for her was that she continued on as a pop star for a while longer, but eventually joined that aforementioned god of debauchery as a Muse of sorts (she was essentially roofied the 'Divine Spark' via the Nectar), becoming a demigoddess in her own right.