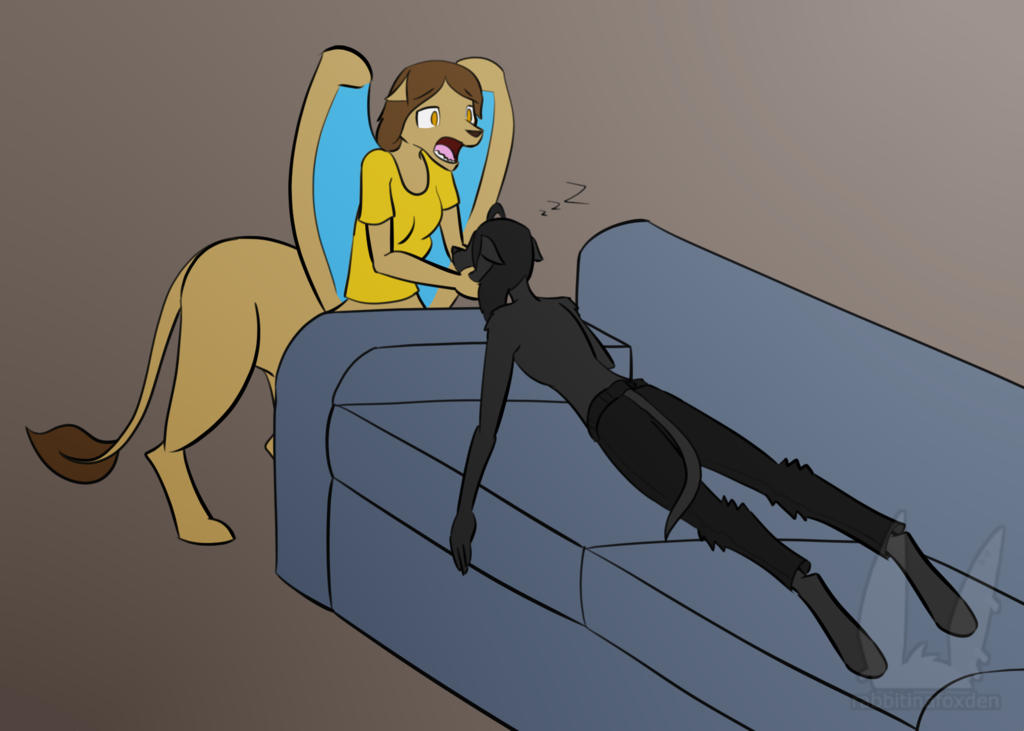 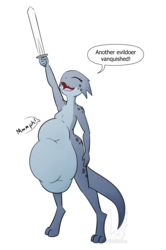 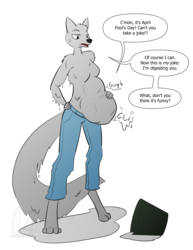 A commission for [url=http://www.furaffinity.net/user/rakshajareth/]Raksha Jareth[/url], featuring his character Imuit and my character Miranda. Miranda's riddle-game rules sometimes trigger in situations where she's not expecting it.

Miranda looked in the bathroom mirror. Her mane was neatly combed, and she was wearing a button-up purple blouse. Her iridescent wings were folded tightly against her back. Even her fur was well-groomed. She looked good, but still casual. Everything seemed to be in order.

She did a last check around the apartment, too, trotting through the kitchen area and into the living room. A bowl of fresh spinach-artichoke dip was set on the low table, alongside a bag of chips and several bottles of beer. She had cleaned off the couch (it had been piled up with books), and the TV was already turned on and displaying the DVD menu for a classic black and white movie. Everything looked to be in order: all she needed now was...

Ding-dong! The chime of her doorbell rang through the apartment.

And that would be her guest! Miranda walked over and opened the front door.

Standing outside her apartment was a tall, lanky, dark-furred jackal. His long black mane was tied into a ponytail, and he wore matching black jeans and jacket, the latter of which was open in the front to expose the fur of his chest. His entire silhouette was so dark, he almost looked like one of those ink-blot tests escaped from a psychiatrist's office, if not for the bright glow of his yellow eyes.

"Miranda! Thanks for having me over." He stepped into the apartment, having to duck his head beneath the door frame. His eyes went to the TV. "And I see you've already chosen our entertainment for the evening! An excellent choice, as always."

"I do try," Miranda responded. "Come have a seat," she said, sitting down on the couch, curling her four legs up beneath her body and making sure to leave enough room for her guest.

"We don't do this nearly often enough," Imuit said, taking his place next to her and reaching for a bottle of beer. "It's hard to find someone who appreciates the classics as much as you."

"Well, I was around when they first came out," Miranda said with a wink. "Try some of the dip, too! It's got veggies. By the way, what's the worst vegetable to have on a ship?"

"That would be a 'leek,'" Imuit responded. He pointed at Miranda with the index finger of his free hand. "Nice try, Sphinx, but it'll take a better riddle than that to throw old Imuit off."

Miranda felt her face flush. "Sorry," she said. "You know how it is. I literally can't help myself."

Imuit took a swig of his beer. "No offense taken, my friend. If anyone can understand being bound to certain rules, it would be me. Why don't we start the movie?"

Miranda nodded, picked up the remote from where it was resting on the arm of the couch, and pressed the play button.

The evening continued on fine after that, other than the fact that Miranda couldn't stop herself from interrupting the movie every once in a while with another riddle. Imuit took them all with aplomb, providing the correct answer for each and reassuring Miranda that she didn't need to apologize. Miranda wished she could turn herself off everyone once in a while, but at least Imuit was understanding.

Eventually, the movie reached the ending credits. The bowl of dip and most of the bottles of beer were empty.

Miranda turned to see that the jackal had fallen asleep, a bottle still in one hand. She smiled and slid off the couch, taking the bottle and setting it on the table. Then she leaned over and gentle shook him on the shoulder. "Hey sleepyhead, wake up. The movie's over."

Imuit stirred and mumbled something incomprehensible, followed by "... huh?"

"You fell asleep during the movie. I think you drank a little too much. You gonna be okay?"

Imuit brought a hand up to rub his temples. He still seemed half-asleep. "Dunno. Just gimme five minutes," he said, his voice slurred.

"If you want, you can just crash on my couch tonight. I'm not sure how I feel about you trying to head home in this state."

"Alright," he mumbled, letting himself slide down onto his side on the couch, before rolling onto his stomach.

Miranda smiled and shook her head. What a lightweight! She would have fun teasing him about this tomorrow. "Well, sweet dreams. What animal has no wings, but yet will fly?"

Imuit shifted and mumbled, in a barely-audible slur, "Three pigs in a hand-basket."

That didn't count. That couldn't possibly count! It had clearly been sleep-talk, and not intended as an answer to her riddle at all. She hadn't even meant to ask it! It had just slipped out!

And yet, she could already feel it: that deep, inexorable pull, rules set before the universe began, an iron-clad contract chained to her will.

Miranda walked around the couch, towards the end where Imuit's head lay. She moved slowly, resisting every step. She eventually reached her goal, standing between the couch and the wall. She reached down, cupping Imuit's chin in her hand, lifting him up from the couch.

He snorted and shifted a bit, but didn't wake up.

"I'm really sorry about this," she whispered. Then she opened her mouth wide and wrapped it around Imuit's long snout.

It took several swallows just to get his head in. She felt his long nose poking its way into her throat. With a wet gluk, her gullet expanded and she pulled in his shoulders.

Even now, she was trying to stop the process, either by squeezing her throat closed or using her tongue to push him out. But it was, of course, futile: her throat pulled him deeper on its own, and her tongue disobeyed its mistress, pulling her meal in instead of pushing it out. She knew, logically, that she couldn't stop this: she had to eat him now, whether she wanted to or not. After all, how many other friends had disappeared into her gullet because they slipped up on one of her riddles?

This was Imuit, though. She had never thought he would be the one on a one-way trip to her gut.

Well, no helping it now. She swallowed again.

Amazing, the jackal didn't wake up, even as she pulled his chest into her mouth. His arms went from hanging limp to being pinned to his sides. She gulped her way down to his waist without problem, then tilted back, using her hands to lift his legs into the air.

She must have created a bizarre sight, with the jackal halfway down her upper torso. He made a clear bulge along the length of her upper body.

She continued swallowing, moving more quickly now that gravity was on her side. Her tongue slid over the denim of his jeans as she began to swallow his legs and tail. Her teeth passed over his hips, then knees, then calves. Her teeth clicked closed behind his large feet, and she swallowed.

The large bulge traveled down her upper body, which swelled out to accommodate it, before sliding down into the hammock of her belly. Her stomach grew beneath her, stretching into a large, lumpy bulge.

Miranda let out a loud belch, and a small metallic object flew out of her mouth, catching the light from the tv screen as it arced towards the table. It landed with a jingle: a key ring with several keys.

Miranda sighed, then walked over to the couch, coming up alongside it. She flopped onto it, rolling onto her back, her belly in the air. She brought one of her large lion paws up and pressed into the bulge.

She looked at her belly for a moment, contemplating her options. But letting someone out of her belly once they had failed a riddle was just as impossible as stopping the process to put them in there. Certain rules simply could not be broken.

She chuffed and shook her head. "You moron," she said, her tone lightly scolding, like a parent talking to a child that had made a stupid decision. "I can't believe you of all people ended up in my belly. You know that once you reincarnate, I'm never gonna let you live this down, right?"

Her stomach gurgled in response.

Miranda pressed her belly with her paws again. As frustrating as the situation was, it still felt good to be this full. As much as she told her friends -- truthfully -- that eating someone like this was out of her control, there was a certain euphoric completeness that she only felt when her belly was filled with someone who had failed a riddle.

She glanced over at the keys on the table. Before she let herself settle in, there was something she had to take care of.

The inside of the apartment was decorated with the trappings of a likable nerd. Books were piled up everywhere. The TV had a shelf next to it filled with classic movies and historical documentaries. A slightly dusty game console sat beneath it.

It would take a while to sort through all this, but it was kind of Miranda's fault that this had happened, so she owed it to him. Imuit would certainly want at least some of these in his next life, and he would appreciate it if Miranda put the more important things into storage so they could be waiting for him. It would be a while, after all.

What would the next Imuit be like? He would be a reincarnation, after all, not exactly the same person. Sometimes his memories of his previous lives could be vague: would he even remember his friendship with Miranda? Would he remember that his last life had ended with him turning into sludge in the sphinx's belly?

Miranda smiled. If he didn't, she would make sure to remind him.