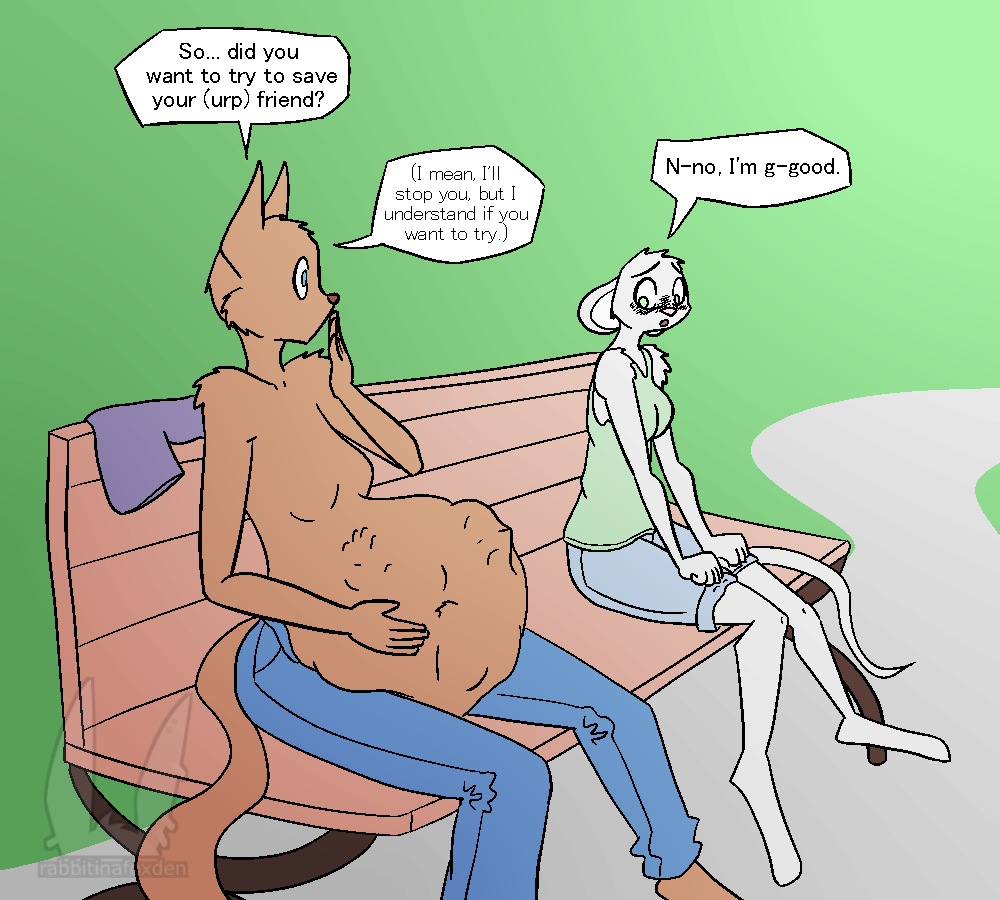 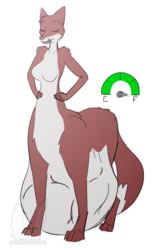 If you're going to rescue a friend from a predator, it's probably best to not let yourself get distracted.

Mandy had always told herself that she wouldn't be the one to run away.

She knew that most prey would. If some predator ran Mandy down one day and made a meal of her, she would completely understand if any other prey she happened to be with decided to head for the hills rather than stay to help. It was a frightening situation, and the understandable reaction to it would be to run.

Mandy was determined. If some friend of hers was attacked by a predator, Mandy would be the one who stayed. The one who fought back. Even if it was hopeless, she would try, and she would stay until it was over, one way or another.

She just hadn't expected it to be so... distracting.

Mandy squirmed, her fists gripping the material of her shorts. The feline sat next to her, running one hand over the bulge that used to be Sara.

It still was Sarah, she thought. The bulge still squirmed and writhed, and beneath the occasional gurgle, Mandy could make out muffled pleas for help.

The feline turned her head to look at Mandy, causing the mouse to jump. She raised one hand to her mouth to stifle a small burp.

Mandy felt the muscles in her legs stiffen. She swallowed hard at the knot stuck in her throat.

"I mean, I'll stop you, but I'd understand if you wanted to try," the feline continued. "I'm just... not sure what's happening here. I would have expected you to either run away or try to stop me. Why did you just... sit there?"

Mandy felt her face flush. Why had she just sat here? The feline had caught them off guard. Mandy and Sara had been enjoying a nice day at the park, and the next moment, Sara had been halfway down the predator's throat. The pure shock had kept Mandy frozen at first.

All her attempts to spur herself to action had been for naught. She hadn't grabbed Sara's ankles and tried to pull her out, nor attacked the feline to force her to stop. Even now, Mandy couldn't take her eyes off the feline's stomach. Her heart leaped into her throat every time she recognized a bulge as the imprint of Rose's fingers or muzzle or shoulder. A low, persistent warmth had settled in the pit of her stomach.

"Fair enough." The feline sighed, gave her belly a firm pat, and let out another small belch. Then she braced her hands against the wooden bench and heaved herself to her feet. "I'm going to head home, then."

She was leaving. The feline was about to walk away, and then this would all be over. Mandy would never see Sara again, and she would know she had done nothing to save her.

It was Mandy's last chance to act. It wasn't too late: Sara was still alive. Mandy could go on the offensive: the predator didn't seem to be taking her seriously, so maybe she could catch her off guard. Go for the legs, knock her off balance, then forced her to spit Sara up while she was still dazed from the fall. She tensed the muscles in her legs, ready to leap to her feet. She would do this. She had to do this.

The feline turned her upper body, giving Mandy a view of the side of her full stomach. "Would you like to come hang out with me this afternoon?"

"I mean, if you don't have any other plans. I was just gonna go back to my place and watch some movies while I digest my lunch, but my roommate is out of town for the week so I'm all alone. Would you like to join me?"

Mandy's heart pounded in her ears. The whole afternoon? She could stay with the feline while her body worked off its meal? To have the chance to keep watching that writhing stomach as Sara's struggles slowly wound down, until finally they would stop, the mouse having become nothing more than...

Mandy grasped at her derailed train of thought. She had to save Sara, right? She had to do everything she could, no matter how hopeless it was.

Because it was hopeless. The feline didn't consider Mandy a threat; she was inviting her to spend the afternoon watching movies with her, for heavens' sake. She wouldn't do that if Mandy had any chance of getting her friend back out.

Maybe if she accepted the feline's offer, she would have another chance. An opportunity might present itself to rescue her friend.

Yeah, that made sense.

"Sure," Mandy said. "I mean, I was just planning on hanging out with my friend this afternoon."

Inside the feline's stomach, Sara gave another flurry of action.

The feline smiled. "In a way, you still will."

"Y-yeah," Mandy stammered as she got to her feet. "I guess I will."