Swallow Your Pride by rabbitinafoxden 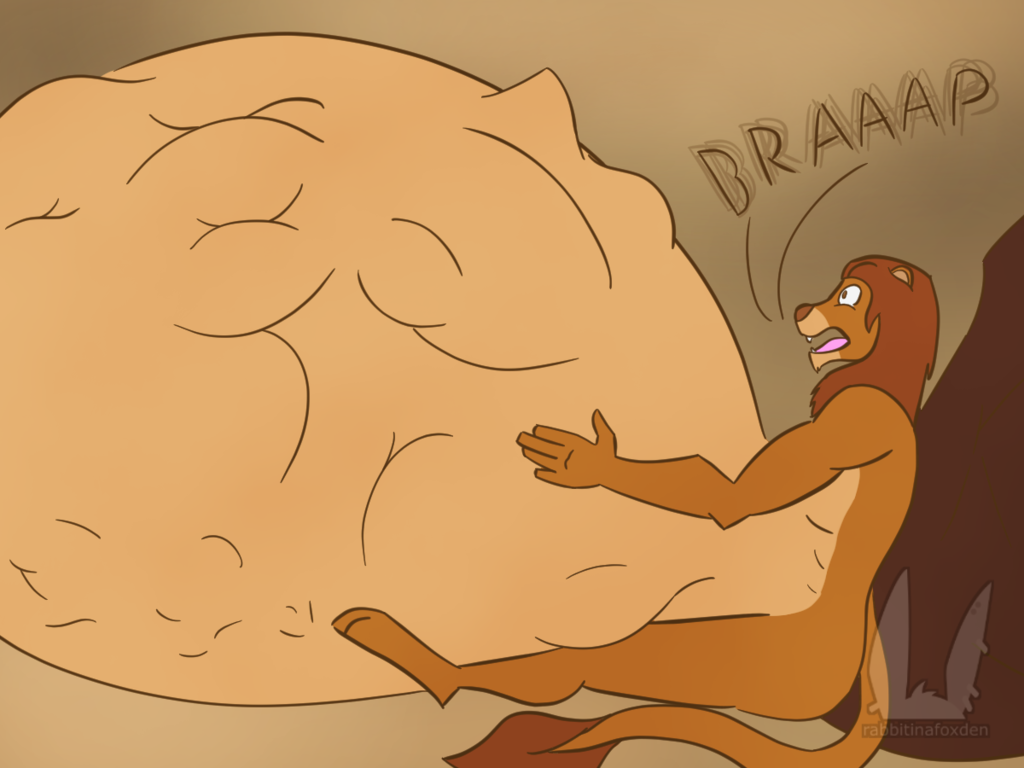 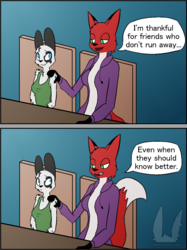 An old drawing and story about a lion who takes things a little far.

Leandra sat cross-legged on the warm rock, the sun beating down on her tawny fur. She watched Nassor, the male lion that ruled her pride, and tried to figure out what he could possibly be thinking.

The morning had started out like any other. She and the other members of the pride had been lounging around the rocky area outside their den, basking in the sun. Several of the younger lionesses engaged each other in a spirited game of tag. The pride ruler himself had rested on his "throne" (really just a comfortable rock outcropping that he particularly liked) with a lioness on each arm and one napping at his feet. Business as usual for a lazy morning for the pride.

Nassor had put a hand on the chin of the lioness on his right arm, tilting it up as if seeking a kiss. Then he had opened his mouth wide and pushed her head inside.

This hadn't been particularly unusual, either. Nassor ate members of his harem on occasion, for any number of reasons. The lioness on his other arm had simply looked away, and the one at his feet hadn't even woken from her nap.

While the other lionesses had tried to ignore the spectacle, Leandra had watched closely as Nassor swallowed the squirming lioness whole. His wide jaw stretched to take her in, and soon she became nothing but a squirming lump sliding down beneath the male's thick mane and settling in his gut. She barely made a bulge in his wide frame. He had patted his belly, let out a belch, run his tongue over his muzzle. Nothing abnormal so far.

Then he had turned to the lioness on his left arm and started shoving her down his gullet as well.

So now Leandra watched as a second protesting female squirmed down Nassor's throat and tried to divine his motivations.

It couldn't just be hunger. One lioness should have been more than enough to assuage any pangs Nassor might have had, even if he hadn't eaten three antelope girls yesterday. He should have been sated for days after that.

It was possible, perhaps, that he had decided to weed out some of the less effective breeders. This thought caused Leandra's heart to skip a beat, as it might very well mean that she could be next: she was one of the only members of the harem to have never given Nassor any children. He kept her around for her hunting abilities, but there were plenty of lionesses in the harem who could hunt and breed, and perhaps he had decided that hunting alone wasn't enough.

Nassor finished gulping down the second lioness's kicking legs, his snout snapping closed behind her toes. The second bulge settled into his gut with the first, creating a large, squirming belly, perhaps bigger than Leandra had ever seen on him.

Was that it? Was he satisfied now?

He then leaned over, grunting with exertion as he reached around his belly and picked up the lioness napping at his feet. He lifted her into the air by the nape of her neck and shoved the still half-asleep female into his jaws.

So: no, not satisfied yet.

This also shot down Leandra's theory about weeding out the breeders, as the lioness currently being swallowed had probably done more to increase the size of the pride than any of the other members of the harem. Nassor even appeared to be having a little trouble with her, both because she was fighting back more than the other two had, but also because he had to work his mouth over her belly, which was swollen with a new potential litter.

He managed just fine, of course, his jaw stretching wide to accommodate her, and soon the confused lioness was sliding down to join the other two.

Leandra tilted her head to one side as she watched the whole thing. She just couldn't make sense of it.

Nassor rubbed one hand over his now-quite-large belly, then he looked out over the other members of the pride.

The other girls had stayed where they had been lounging, but no longer tried to ignore Nassor's meal. To eat two members of his harem at once was already unusual, but three? That just didn't happen.

For a moment, Leandra thought that Nassor was finished. But then he beckoned with an index finger. "Aria. Come here."

The lioness in question stood up and walked towards Nassor. Her legs shook and her eyes were wide, but she forced herself to put one paw in front of the other.

"Yes, Nassor?" she said, a quaver in her voice.

Nassor just smiled and beckoned her towards him.

A few seconds later, she was sliding down his gullet to join the others.

Maybe he was trying to weed out the current generation? The current harem may have displeased him in some way (though Leandra couldn't imagine how) so he had decided to get rid of them. Then he could just let the younger girls take their place.

Except that when Nassor finished with Aria, he began calling some of the younger lionesses forward, slurping down their slender bodies and adding them to his growing gut. So obviously, that wasn't his goal, either.

One by one, the members of the harem disappeared into Nassor's maw. Some struggled while being swallowed, some cried or screamed, and some went more quietly, but none refused to come when he called. He was their pride leader, after all. The instinctual desire to obey was hard to overcome.

Leandra wracked her brain trying to come up with an explanation for what she was seeing. There must be something she was missing. But as each wiggling female body disappeared between his lips, Nassor's goal became more and more clear: he was going to eat the entire pride.

Maybe he had some other females hidden somewhere to replace them, though that seemed unlikely. Or maybe he was tired of the pride life entirely, and wanted to live as a nomad for a while. A big strong lion like Nassor could probably just eat another male and steal their harem if he got tired of the bachelor's life.

Leandra watched him swallow down Lexie, another of the strong breeders of the harem. He barely had any trouble swallowing up her swollen belly and adding her to his own.

And that left just him... and her.

Nassor leaned back against his favorite rock, rubbing his enormously swollen gut -- or at least the parts of it he could reach. He let out a loud, satisfied belch.

Leandra didn't wait to be summoned. She stood up, the last remaining member of the harem, and walked forward. Her legs shook with every step, and her heart pounded in her chest.

As she walked by his huge gut, she reached out and ran trembling fingers over it, feeling the squirming bodies of her harem sisters beneath the fur and flesh. Here and there she could make out the curve of a shoulder, a hip, a belly. She even saw a muzzle or two that she thought she could recognize through the fur. At one point, a hand pressed out, the trapped lioness's fingers brushing hers.

She finished her traversal of the massive stomach and reached Nassor's torso. She hadn't taken her eyes off the bulging, squirming mass yet. "They're all in there," she said. "Nine adult lionesses. All of their daughters. The whole harem."

Leandra nodded. "Almost. I haven't joined them yet."

"Are you going to ask me why?"

Leandra turned to face Nassor, looking him straight in the eye. All of the different theories she had considered ran through her head. And one truth floated to the top, becoming more clear than all the others:

"It doesn't really matter, does it?"

Nassor smiled. "Well then, let's finish this up."

He opened his mouth wide.

Leandra stared into his open maw, looking over the broad tongue, the white teeth, the glistening walls, and the entrance to the throat beyond them all. She climbed onto him, partially propped against his gut, bringing her face close to the yawning entrance.

A rumble came from beneath her, and Nassor sighed. A blast of hot breath washed over her, causing her to wrinkle her nose. The male lion's tongue curled, as if beckoning her forward.

Leandra's heart pounded in her ears, her shoulders were shaking, and her head felt dizzy. She had spent her entire life serving Nassor, and now she would be nothing more than a snack for him. She wasn't sure if the thought scared her or excited her. Maybe both.

She took a deep breath, then placed one hand on thick tongue. It moved beneath her fingers as she put her weight on it. She put her other hand in his mouth, then lowered her head so she could start to crawl inside.

After all, her sisters were waiting for her.