Hunting By Proxy (Story) by rabbitinafoxden 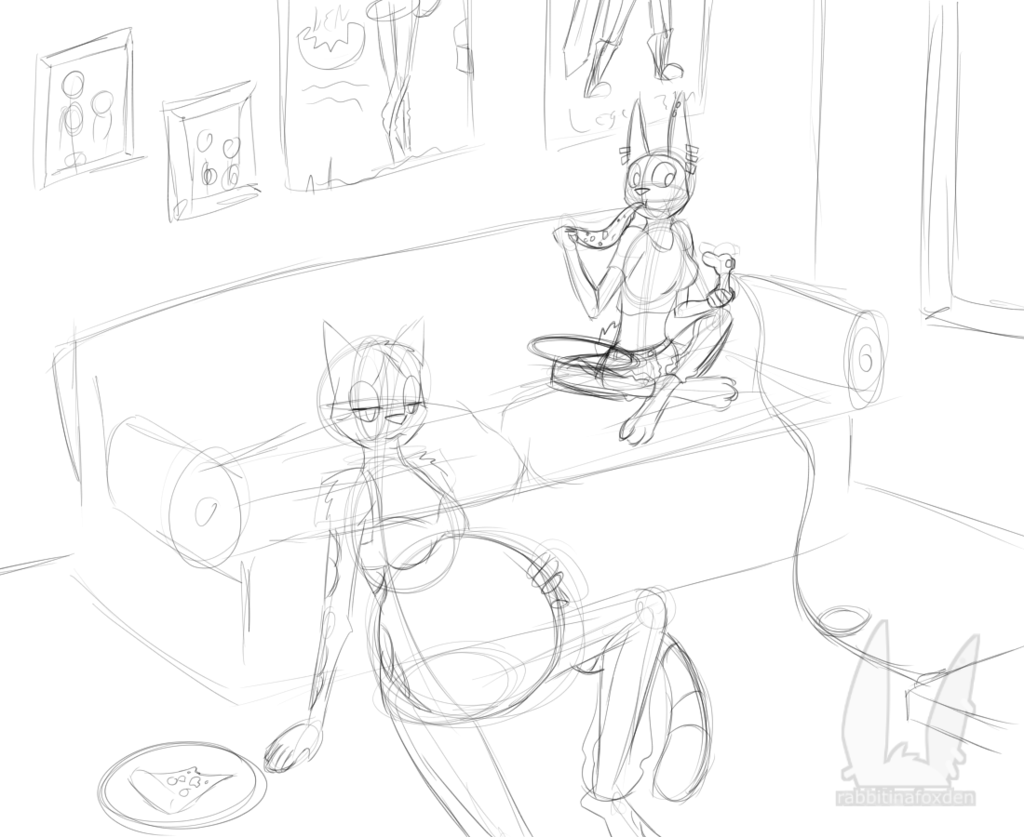 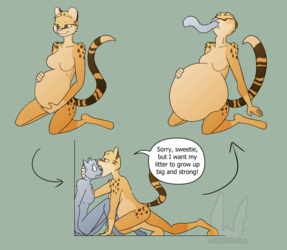 An old story about Alex and Lindsay's relationship. The drawing is just a sketch, but the story is good, I think!

Lindsay sat on the floor in front of the couch, watching the TV screen.

It wasn't due to a lack of space. The couch had enough room for both her and Alex; in fact, Lindsay had been sitting next to the petite rabbit just a few minutes ago. But the couch was rabbit-sized, giving Lindsay little room to move around, and she was naturally restless. Thus she had allowed herself to slide off the couch to recline on the floor. Her calico tail swished back and forth next to her. She would climb back on the couch in a minute.

Alex, meanwhile, sat with her legs pulled up into a cross-legged position, leaning forward on the couch cushion. Her brow furrowed, and her large teeth clenched. Her thumbs flew across a plastic controller that she gripped tightly in her hands.

On the tv screen across from the pair, Lindsay watched a stylized digital representation of a female wolf wearing a black cloak stalk through some leafy undergrowth. On a nearby path, a rabbit walked by, looking alert.

As the rabbit passed the wolf's hiding place, Lindsay heard the click of a button being pressed, and the wolf leaped out, pouncing on the rabbit.

"Gotcha!" Alex shouted, pumping her fist in the air.

Indeed, the wolf on the screen stuffed the rabbit into her mouth, tilted her head back, and swallowed the wiggling prey down. She then jumped back into the bushes just as another rabbit came around the corner, narrowly avoiding notice.

"And that's how it's done!" Alex declared.

"You know," Lindsay said, "in the real world, a pred couldn't swallow a prey that size that quickly, especially not without attracting any notice." She watched as the hiding wolf's stomach began to shrink. "And she definitely shouldn't be able to digest her prey that fast."

"Jeez, killjoy," Alex said. "It's not the real world, it's a game! And the game'd be super boring if I had to wait for a day and a half to digest each prey."

The wolf on the screen moved to another hiding spot, preparing to pounce on another bunny.

"What's the goal of this game again?" Lindsay asked.

"You're trying to get into the castle and reach the princess. What happens then is left up to the player."

"I bet I know what you always choose." Lindsay said with a smile.

Alex smiled back. "I bet you do." She proffered the controller. "Want to give it a try?"

"Nah, I'm terrible at these games. I'm content to watch, if you don't mind the comments from the peanut gallery."

Alex turned her focus back to the game, making her wolf avatar pounce on the next bunny.

Lindsay smiled. She liked these afternoons spent hanging out with Alex. The rabbit didn't seem to have that need to fill the air with mindless chatter. She was perfectly content to just sit and let Lindsay watch her play her game.

Lindsay jumped as the doorbell rang.

"I got it!" Alex said, pausing her game and jumping up from her seat and walking to the front door of the small-yet-cozy apartment. After a short exchange, she turned around holding a flat, rectangular box. "Pizza's here!"

Lindsay shrugged. "You know that non-meats don't do anything for me," Lindsay said.

"I know," Alex replied, walking towards the small kitchen area of the apartment. "Come on, I've taken care of that, too!"

"You've taken care of...?" Lindsay furrowed her brow. "Oh, tell me you didn't." Putting an arm on the couch for support, she hefted herself to her feet and followed Alex into the kitchen.

Sure enough, lying on the counter was a female mouse. Her clothes had been stripped off, revealing her white fur, and her legs and arms had been bound expertly with ropes. A gag in her mouth prevented her from screaming. She had damp tear stains on the fur around her eyes, and she struggled against her bonds when she saw the two enter.

The mouse looked at Lindsay with wide, fear-filled eyes. "Mmmph!"

Alex walked to the opposite side of the counter, leaning against it with both hands. "So, what do you think?"

"I was out for a morning jog," Alex explained, "And I ran into her in the park. We started talking, and I thought, 'Hey, I bet I can convince this mouse to come back to my apartment with me, and Lindsay is coming over later, she'd probably appreciate it if..."

Lindsay interrupted her by holding up one hand. "Just stop right there. Don't try to play this off as if you're doing this entirely out of concern for me. I can hunt on my own, Alex. I know I'm not the biggest or strongest pred out there, but I've managed to keep myself fed my whole life."

"I know you didn't," Lindsay continued. "In fact, we both know what you really wanted: you wanted to hunt, to feel like a pred, but you're still a rabbit, and the only way for you to finish it is to rope me or Rox into doing it for you. You want me to eat her -- and you want to watch. You're just trying to use me to get your kicks."

The mouse squirmed and nodded her head vigorously.

Lindsay hesitated a moment, then said, "Well... I didn't say that."

Alex's head snapped back to attention. The mouse let out a muffled squeak.

"I'm not saying I won't do it," Lindsay said. "I mean... I get it. I really do. It's the only way for you to... be your real self, right? Just don't try to pretend it's something it's not. And don't spring it on me like this. If you want this to be a regular part of these Wednesday evening get-togethers, that's fine. I just want to know that in advance."

"It is kind of weird," Lindsay admitted. "But everyone's weird in some way, and you're my friend. Now come on, we've kept our guest waiting long enough."

Alex broke into a grin. "I think you're absolutely right."

Lindsay nodded and walked around to the end of the counter, where she could reach the mouse's kicking legs. She hesitated only a moment before pulling her shirt off over her head, setting it aside on the counter. Then she picked up the prey's ankles in her hands and licked her lips. "You ready?" She asked.

Alex stood at the side of the counter, giving her ringside seats. "Ready," Alex said.

Lindsay lifted her hands and guided the mouse's toes into her mouth.

The mouse immediately redoubled her squirming, but she could gain no purchase on the slick counter top, and lying on her stomach with her hands tied behind her back, she didn't make much progress.

Lindsay pushed more of the mouse's feet into her mouth, feeling the toes tickle her uvula as they slid into her throat. She took a moment to savor -- how often did she really get a chance to eat without risk of someone walking in on her, after all? Then she swallowed, her rough tongue pushed more of the mouse into her gullet. The petite female's legs began to slowly disappear between Lindsay's lips, pulling the prey backwards on the cold counter top an inch at a time.

Alex leaned forward, resting her elbows on the counter and her head on her hands. She watched intently as the mouse's legs disappeared into Lindsay.

The hips slowed Lindsay down, but only for a moment, before her lips stretched at the widest part of her meal popped inside.

The mouse had started making muffled noises that sounded like pleading. With tears in her eyes, she looked up at Alex.

"You want me to let you go," Alex said. She moved one hand to the mouse's back, stroking her fur, while the other stayed to prop up the mouse's head. "But what you don't understand is that if I could, it would be me. I would be the one swallowing you down, inch by inch." She leaned in close, her voice dropping to a whisper. "My lips sliding over your body, my gullet expanding to accept you. If only I could, I would devour you whole." She opened her mouth and licked the mouse's cheek, causing her to shudder and try to shrink away.

Lindsay was pulling the mouse in deeper, the prey's stomach moving over her tongue. Her mouth stretched as she squeezed the rabbit's chest inside, and now only her shoulders and head were on the outside. Lindsay was now able to lift her head, no longer needed the counter to support the mouse's body.

"Can you imagine what it would be like?" Alex said. "To be devoured by a rabbit. To be sliding past my lips and teeth right now." She opened her mouth as wide as she could and placed it around the tip of the rabbit's nose. Of course, it couldn't stretch much further than that, but she still smiled as she backed off. "Oh well. This is the next best thing."

Alex reached around the mouse's head and undid the knot holding the gag in place, then pulled it from the mouse's mouth.

Alex responded by placing her index finger across the mouse's lips.

Lindsay took that as her cue. She swallowed as Alex pushed gently on the mouse's nose. The feline lips closed around the mouse's face.

Alex reached forward, then stopped. "May I?" She asked.

Lindsay made a "go ahead" gesture.

Alex placed a hand on the bulge in Lindsay's throat, her fingers following its path as it traveled down before settling into a large, wiggling bulge in the feline's belly. The rabbit stepped forward, so her stomach pressed against the bulge, making it look almost as though it were her belly.

They stood there like that for a moment, Alex stroking her fingers across the wiggling bulge. "How was she?"

Alex nodded, then coughed and stepped back. "Ahem, um, anyway..."

Lindsay smiled. "Want to get back to that game? I'd like to see you... rescue the princess, or eat her, or whatever."

"That might take a while," Alex said. "I've got quite a few more levels to go through."

"Hey, I've got some time," she said, patting her belly. "Like I said, digestion isn't as fast as it is in the digital world."

Alex grinned. "So, I know it doesn't actually, like, feed you, but do you want any of the pizza?"

Once she had a pizza-laden paper plate in hand, they returned to the couch, where Lindsay settled back down on the floor to munch on the cheese-covered snack, watch her friend play her game, and enjoy the sensations of her squirming meal.

All-in-all, not a bad way to spend an afternoon.