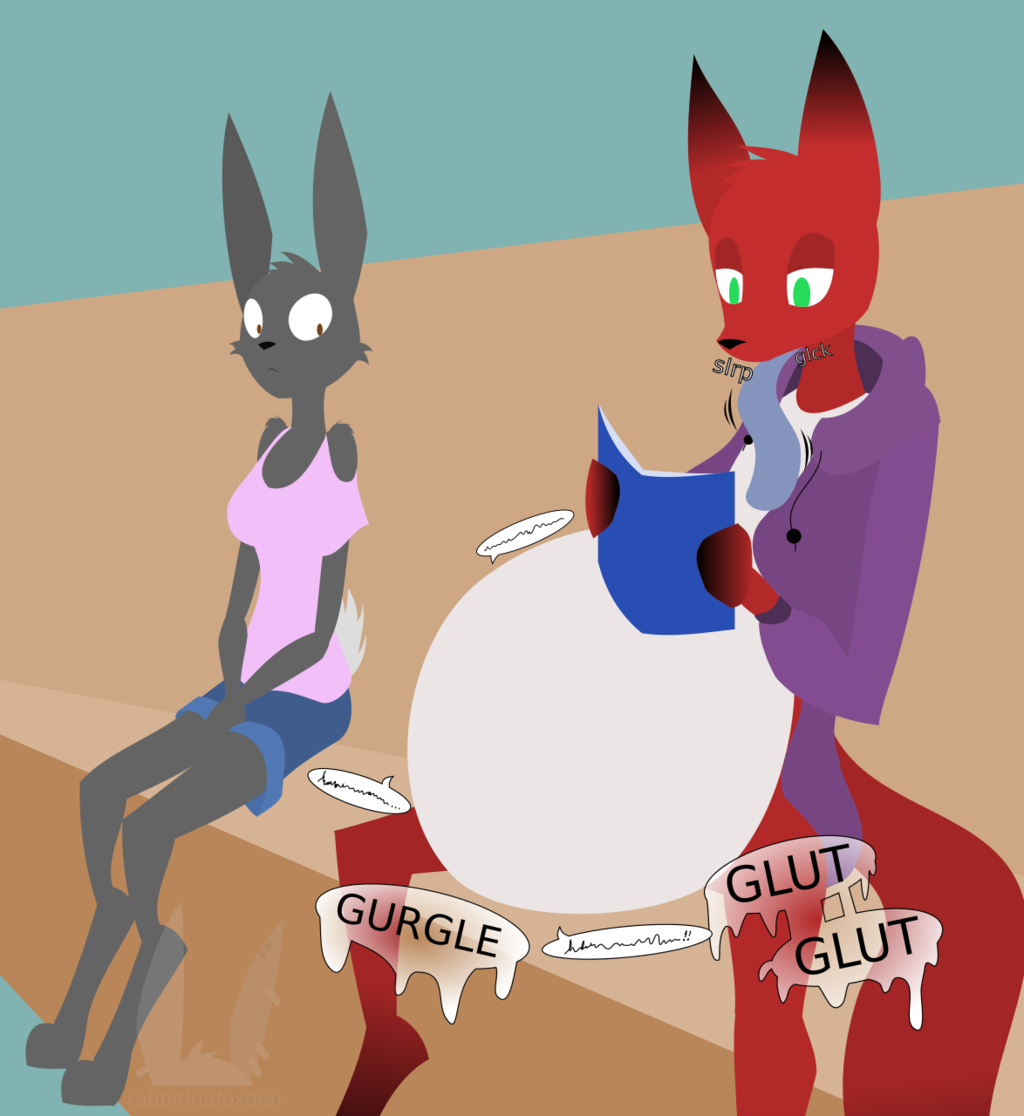 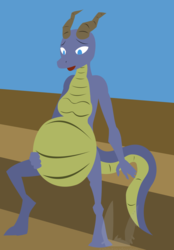 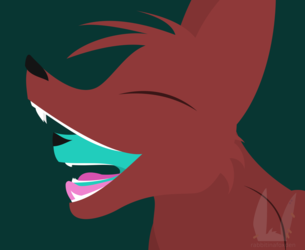 Amy sat straight in the bus seat, trying to move as little as possible. Her heart thudded against the inside of her rib cage, and though she tried to stare straight ahead at the back of the seat in front of her, she couldn’t help but sneak the occasional glance at the passenger sitting next to her.

She hadn’t wanted to sit next to the predator, but she had been running late this morning, only barely making it to the bus stop in time to jump through the doors before they closed. This seat had been the only one open. Obviously, no one else had wanted to sit by her, either. Understandable, on a long trip like this; the bus was taking them across the country, and the ride would be several hours long, at least.

Amy took a deep breath, trying to calm down. She told herself that she wasn’t in any danger. The vixen had clearly already eaten, and it must have happened recently, judging by the muffled screams and pleas for help still coming her distended belly. The vixen wouldn’t be hungry now, not after having just eaten; if anything, this was probably the safest seat on the bus!

Just because it was safe didn’t mean it was comfortable, though. Amy knew that there were lots of predators out there that wouldn’t hesitate for a moment to put the petite rabbit right into the same situation as this poor vixen’s prey. She couldn’t help but imagine that if, say, she had arrived to the bus stop early, she might be on the other side of the vixen’s fur right now.

Amy snuck another sideways glance at the vixen. She seemed normal enough, for a predator; her fur was a dusky red, with dark patches on her hands, feet, and ears and a white patch running down her belly. The only article of clothing she seemed to be wearing was a loose-fitting purple hoodie.

None of that was unusual. It was not uncommon to see a pred with a full belly – they had to eat, after all, just like Amy did. Nor was her lack of clothes a surprising sight, as she would have had to remove anything she was wearing before eating, to prevent it from being destroyed by stretching. Many predators simply went without clothing when planning to eat, counting on their fur to preserve their modesty.

No, the unusual thing about this whole situation was the tail. Not the vixen’s tail, a thick, bushy number that rested on the bus seat beside her. Hanging from between the vixen’s lips was another tail, this one thinner, with pale blue fur. It extended several inches from her mouth and twitched violently, its fur standing on end. It belonged – it had to belong – to the poor thing in the vixen’s belly.

But why hadn’t she swallowed it? The tail must be running all the way up her throat – that couldn’t be comfortable. And peristalsis would naturally try to pull the rest of the tail down, so the vixen must be holding it between her teeth intentionally. But why? She didn’t seem to even notice it, ignoring the fantic twitchings as she thumbed through her magazine.

The vixen’s gaze flicked up, and her eyes met Amy’s. The rabbit immediately snapped her head forward, intently examining the headrest of the seat in front of her. She sat still as a statue, every muscle clenched, her heart hammering inside her chest.

Several tense minutes passed, but the vixen didn’t say anything. Finally, Amy got up the courage to glance at the other passenger again. The vixen had put down her magazine and leaned against the side of the bus, her eyes closed. She was taking a nap.

Amy looked her over. She could still make out muffled pleas and protests from the vixen’s belly, and the tail still twitched between her teeth. And Amy started to wonder… should she try to save the prey?

Keeping the tail in her mouth must be some kind of game, but it could turn into the vixen’s undoing. All Amy had to do was reach over, grab the tail, and pull. She could yank the prey right out of the vixen’s stomach. Of course, then she would have an angry predator on her hands, but the vixen would certainly be disoriented after being forced to regurgitate her breakfast, and from the look of the tail, the prey must be a feline, another predatory species. Amy could stuff the still-unbalanced vixen down her former prey’s throat. It would both be ironic and solve the problem, and Amy doubted the feline would object too much after being saved.

Of course, it would be dangerous, and Amy didn’t really want to make a scene on the bus. But if it were her in that belly, she would want someone nearby to do anything they could to save her. And if Amy waited until the trip was over, there might not be enough left of the prey to save.

Amy took a deep breath and then reached out. Her heart pounded and her fingers were shaking as they approached the vixen’s nose and twitching bit of tail. Carefully, not wanting to wake the vixen until absolutely necessary, she wrapped her fingers around the tail.

However, the moment she had a firm grip, and before she had a chance to pull, she felt her own hand being yanked forward. The vixen swallowed, and Amy’s hand was pulled into her muzzle.

The vixen’s eyes opened a crack, looking straight at Amy. The predator swallowed again, and Amy’s hand, still clenching the tail, slide into the tight, wet, pulsing confines of the vixen’s throat.

The vixen’s lips curled into a smile around Amy’s arm, and a lump formed in the rabbit’s throat. This was not going to end well for her.