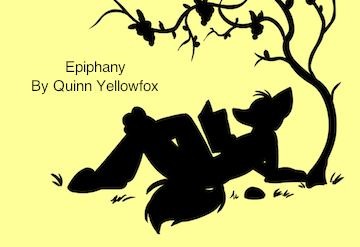 Tanner's footfalls echoed through the sanctuary as he ambled between rough hewn pews. Dust swirled around his full ruddy tail. He opened the portal and took in the musty scents of autumn. Barren trees waved in the breeze but no one was waiting. The Bear Clan was sated and cloistered away in their mountain dens, preparing for winters sleep. With the harvest secure, peril seemed far away. Complacency was normal--just another part of the cycle of life. Still, there was a rite to perform.

He adjusted his robes, raised his arms and clapped twice before walking back to the altar of Samran. A dozen carved deities, one for every clan, smiled at him as he kneeled--different species, different faces, all divine.

He kissed his clan guardian, a benevolent fox icon, and began to chant. He cut a channel into a strip of greasewood with an obsidian blade, and filled it with sacred herbs. The offering was secured with purple thread and placed over a large red candle. As he lit the sacramental pyre, he heard a whisper.

He closed his eyes and continued the chant. As the wood was consumed, it hissed and popped sending a sweet cloud through sanctuary. Tanner took in a deep breath and heard his companion do the same. He smiled and scooped hot ash into his calloused paws, then turned and blew glimmering powder into the air, letting it fall onto the empty pews and a young badger in the front row.

"I'm sorry Evan. I didn't expect anyone to come to the burning today. I don't have any words prepared." Tanner sat and rubbed the last bits of sacred dust into the child's cheeks.

"That's ok. I just wanted to spend some time with you. You seem so lonely lately."

"Why would I be lonely?" He lifted Evan's chin. "This is my home. It's where I work and live. I have books and a warm fire. When people are hurting or in need, they come to me and I give them comfort."

"But you celebrate alone?"

"When winter comes, or when the Bear clan is marauding, they will return. Until then, I keep the faith and perform the rites that bring us all prosperity."

"So you live to help people when they're afraid?"

"I guess I do." He put a paw on Evans shoulder. "And when they are hurt or grieving."

"What about when they are happy, or busy working, or--"

"I was there when you were born. That was a happy time."

"But what about the rest of the time?"

"They know I'm here for them."

Evan pointed out the door. "But you're not there for them."

"A mystic's life is spent in solitude. We accept it as a part of our calling."

"Why? These old stone walls can't give you any comfort."

"A lot of my time is spent studying the ancient texts. I meditate on meaning and try to find insights to help people during the painful times."

"But how can you help them if you don't know them?"

"I do know them. I know their fears, their regrets--the things they can't share with anyone else."

"But if you don't know what makes them laugh or why they sing, don't you really only know half of them?"

"But that's the half they need me for. The rest of the time they have happiness." Tanner stood and walked to the altar. Evan helped him cover the icons with a fine white linen shroud.

Tanner stared. "I don't remember you being so tall. You've grown quite a bit."

"I guess I have." Evan chuckled and ran his paw along the altar. "So, what if they want you?"

"When they want me, they come here."

"But if you don't go to them, why would they want to come here."

"But you go as a teacher, as someone superior... untouchable."

"Do I really seem that distant?"

"You never sing with us... at least not the kind of songs they sing in the taverns. Don't you know the words? I could teach you--"

"Evan, it wouldn't be appropriate."

"See, you are untouchable." Evan turned and headed to the door. He yelped when Tanner accidentally stepped on his tail.

"There is a lot about me that you don't know." He rubbed his tail tip and winced.

They stepped outside and watched a flock of birds sing their way southward.

In the west, dark clouds rolled over the mountains. Smoke swirled frantically from chimneys in the valley as if fleeing the coming storm.

"Is it true Tanner?"

"Can Samran can wear any face?"

"Any stranger may be Samran in disguise. That's why all should be treated with respect and caring."

"What about a friend?"

Tanner laid his ears back and glanced back into the sanctuary. Then he looked into Evans eyes. "Well, it's said that--"

"No Tanner, what does your heart say?"

"I guess Samran could wear any face, including a friends."

"Well, if that's true, I wonder why you would stay here in your study when you could walk into town and chance to touch the face of the divine."

Tanner blinked as Evan's ears grew longer. A warm golden glow slowly surrounded them both as Evan took shape of an adult fox.

"Go to town. Be alive and know that every face you see is mine." Evan smiled and faded away.

For an eternal moment, Tanner stood alone in the courtyard. Brown leaves danced in icy whirlwinds around his feet. Vague voices singing songs from his youth echoed from the valley below.

He sighed, then took off his vestments and headed down from his solitary hilltop. With trepidation, he walked to town ahead of the storm--by himself; but not really alone. 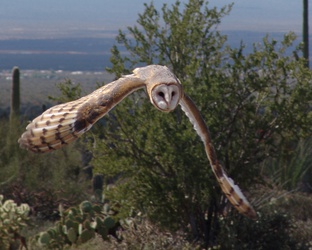 Tanner, a Mage of Samran, realizes that not all knowledge is contained in books.