The Death Of A Queen by QueenDanny 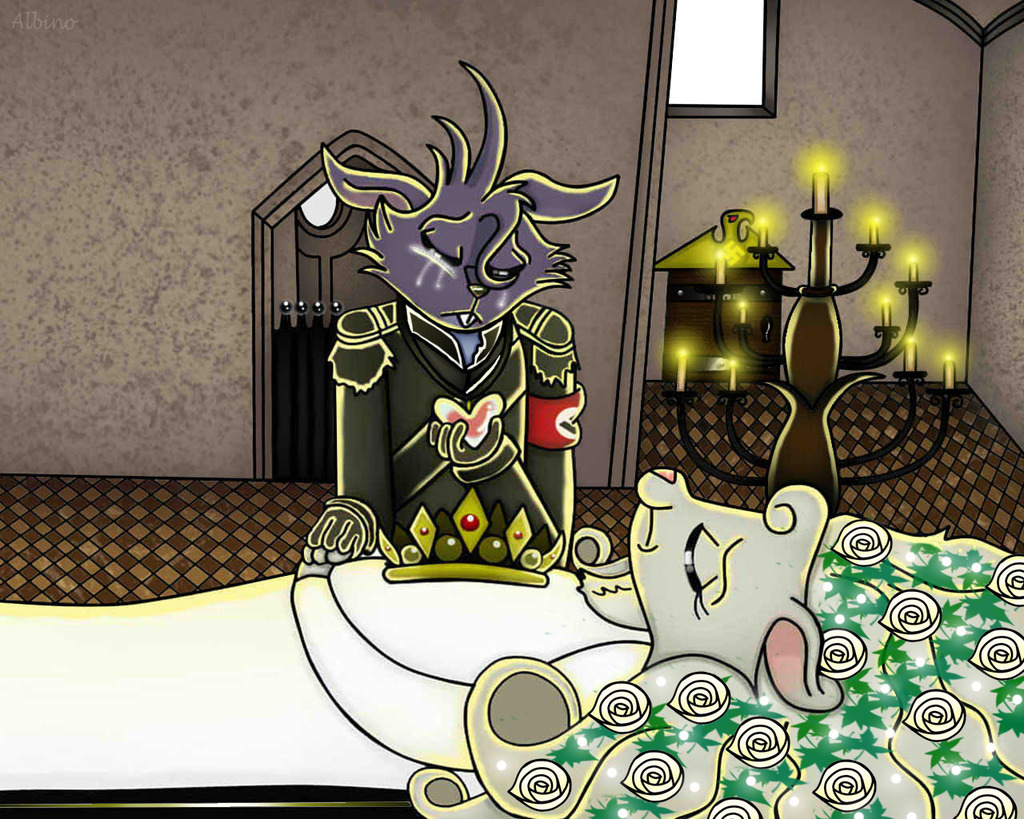 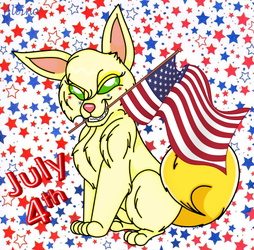 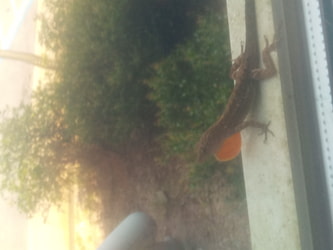 The Death Of A Queen

Once upon a time, in the magical land of La-la Land, a valiant Nazi prince married a beautiful Jewish princess. They lived in wedded bliss for many years, but not forever. As years past there relationship grew unbreakable. a decade had past since the two star crossed lovers had been wed the two were now expecting there first child.

Cain tended to his beloved wife satisfying the beautiful Jews craving for Quail & watching over her during the 9 months of uncomfortable pregnancy. one early morning during the 3rd week of October. The expecting Queen went into labor. The Tyrant Fuhrer waited excitingly for his long coveted Male heir.

As the early morning turned into nights the Queen was still in labor braving the painful consequences of child birth. by the 11th of October there were real fear for both the Queen & her child & special prayer's offered in the kingdom for there safety.Two days had passed. Chilla had delivered a rare set of Quadruplets. ( two Boys & two girls )among them The coveted son of Chilla's beloved King.

Cains Brother Damien the emperor & the Aryans greeted the birth of a male heir, "whom they so hungered for so long" with joy and relief celebrating with bonfires lit, fireworks, Nazi Parades & songs. Queen Chilla, appearing to recover quickly from the birth, sent out personally signed letters announcing the birth of "prince Adolf. conceived in most lawful matrimony between my fuhrer."

A few hours after the quads had been born Cain visited with queen Chilla whom was still confined to her chambers by the physicians to rest until she was well from childbirth. to proceed the plan coronation. The Queen appeared well but Physically she was weak. She was dressed in her luxurious golden robes that covered the bed & golden red jeweled crown mounted her head. Siting down Gently at her bedside Cain confronts Chilla with the male heir embraced in his cradled arms he had named Adolf. Cain presents her with his son. thanking her endlessly for the future king.

It was in this union with her king that Chilla informed her husband that she was feeling a little unwell. Cain assured her that she was still weak from the childbirth & needed to rest to revive her strength. But Queen Chilla's Labor was long, painful & difficult lasting threes nights and two days of a complicated & painful delivery of her Quadruplets. leaving her very weak. after the celebrations it became clear that she was seriously ill.

Cain & the physicians thought it was some sort of Flu & Cain scolded Claudette ,fern & Chilla's other attendants for letting her catch cold & contracted this strange flue. The Queen had become delirious.
But as Chilla grew even worse Cain realized that she had become ill with Childbed fever 3 days later after giving birth to her Quads. Cain believed the Childbed fever had been a result to Chilla's long painful child birth.

The royal physicians inform Cain that the queen has taken ill & that she continued to grow weaker. Cain rushed to the Queens Chamber see his wife. leaving him & the physicians in much worry. the physicians gave chilla everything in there disposal but she did not respond.

The Fuhrer Cain is greeted with Nazi salutes from the lady's as he enters The queens Chambers where his wife lay in her bed. Cain stared at his sick wife in pity. examining her from the entrance that faced the bed. Cain slowly neared his wife. getting closer to her

"Its childbed fever. I know because my mother died of it." Cain worryingly informed the people still present in the Queens Chamber.

"Every one is dismissed. you may take your leave. Cain excused the mere presence from the room. " Get Out!'

Cain kept Chilla confined to her Chambers of the palace where she had given birth to there children & stays near her vigilantly dabbing her feverish forehead with a damp cold cloth. talking to her & writing in his journal in the mean time. of Chilla's progress to recovery. He had never seen Chilla taken ill before but it scared him to death. Chilla was so hot to the touch. & slipping in & out of consciousness.

Chilla spoke up to Cain in a soft but in a weak & sickly tone. Chilla asks Cain of her babies & to care for them for her if anything happens. Cain is confident Chilla will pull through & urges her to stay strong. Cain treats her with his healing magic & herbs the Physician gave him for medicine to get rid of the infection.

CAIN: Please don't go, don't go only that you have giving me everything you promised. Please don't leave me You are the milk of human kindness. you are the light in my dark, dark world.Without you my life is a desert.

Chilla closed her eyes Cain being the last thing she sees that night as Cain stays near her holding her hand watching her sleep.

“Damien!” Cain screamed summoning his older brother to his Queens chamber he had stayed near his wife's bedside . she lay on her back, her breathing labored. She was only semi-conscious.

Cain was frantic, with tears streaming from his eyes.

“Damien! Help me!” He screeched hysterically. The emperor immediately ran to the Queens Chambers and rushed to his little brother’s side.

“I don’t know. She just fell un-conscious I’ve tried everything I know but she won’t wake up,” Cain explained frantically. “What is it? What’s wrong? Why won’t she wake up?”

Damien looked upon his little brother with pity. Cain was as old as Damien, but for an immortal he was still just a child. Damien had experienced the death of a loved one aswell & his mother Queen Ariel whom had also been claimed by the unfortunate sickness of Child birth fever. and like Cain he had been willfully blind to her inevitable passing. Refusing to acknowledge the inevitable only made it even more devastating. He wished He could have spared Cain this pain, but He knew it was a lesson he would have to learn on his own.

“Do something!” he demanded.

“She’s beyond all help now. Even mine,” Damien said.

“What do you mean you can’t!?” Cain demanded. “You’re the most powerful God in La-la Land . How can there be nothing you can do?”

“For millennia my subjects have asked me to prolong the lives of their loved ones, even resurrect them from the dead,” Damien replied. “I tell you what I tell them. Even I have no power over death.”

“No! You’re wrong! If Godly magic makes us immortal, then why can’t it bring some one back to life” Cain asked.

“Your magic is an intrinsic part of your being Can . You cannot share it with another any more than you can share your heart,” Damien explained.

“I’m sorry my brother,” Damien said, lowering his head. “There is nothing I can do.”

“No! No!” Cain screamed. the palm of his right paw began to glow with a ferocious light, and Chilla was encompassed with a blue aura as Cain infused her body with as much magic as he could. “Please! Please Chilla don’t leave me.”

Chilla's eyes slowly opened, and she looked into the eyes of her fearless husband . She smiled at him, and he smiled back.

CHILLA: I've given you the son & 5 wonderful Children. maybe my time here is done

CAIN: you must not talk like that. stay strong Chilla. fight on.

CHILLA: I love you. I Love you Cain.

Chilla spoke up her last bit of strength
And then her eyes closed, and her breathing stopped.

“No!” Cain screamed. He cast spell after spell, but nothing brought her back. Finally He threw himself over Chilla's body and hugged it desperately. He began screaming as if he had literally been destroyed.

his horrific screams were heard throughout the palace, bringing every member of the Nazi Party & and everyone else within earshot to the Queen's Chambers.

“It’s all right,” Damien claimed, holding back the crowd with his mere presence. “Just let him be for now. Just…let him be.”

With the passing of the Queen , all of Lala land was in mourning. Cain commanded his best friend Banzai to present him with the Heart of his beloved Queen. in a glass heart shapped vial neck chain. The next day a spectacular ceremony was held in her honor, and her remains were put to rest in a glass casket within the crypt of the Nazi empire. The Rabbi presided over the Jewish funeral. Chilla was the first Queen in the history of Lala land to be given a Queens Funeral. not even the legendary Queen Ariel was as lucky. even in Death Chilla was worshiped by her subjects as a great deity.

All the Aryans were heartbroken to see their beloved Fuhrer in such despair. He couldn’t even bring himself to speak at Chilla's funeral. he hadn’t spoken a word since her death at all. With Cain utterly grief stricken his heartache utterly consumed him, and all he could do was weep and wail in misery.

Though he hadn’t eaten or slept since the lost of his Queen, his Nazi Kermrades had at least been able to prod Cain into drinking some water. Fegelien was bringing him some now. the Hyena gently opened the door to the bed chamber and stuck his head in to see if Cain was still in his bed .To his surprise the bed was empty. He wasn’t sure if that was a good sign or not. he quietly walked into the bed chamber looking for any sign of the Fuhrer.

But no trace. Fegeiline then ventured to the crypt where he knew he would find Cain for sure

“Mein Fuher ?” he said softly. making his way into the crypt. It was then he noticed Cain standing aside his lifeless wife stroking her hand gently as he wipped a tear from his eyes. Fegelien could only stare at the king. Cain stood beside Chilla with his head hung low. he did not look at all himself. his navy blue fur , and tail were disheveled, his face haggard and tear stained, and he bore none of the accouterments typical of Lala land Royalty.

“This life is worthless to me now without You ,Chilla,” Cain said as he stroked his wifes cold stiff paws. Even in Death Chilla's beauty never faded. her expressions calm & peaceful the Widower Nazi leader weaved white Roses into her silver locks. looking down at her praying that she would some how wake up as the Queen still lay in her heavenly slumber.

“The world is now grey and ugly and foul in your absence, I would rather be tortured by Communist than to exist forever without you, my love. . If you do still live on in some form on some plane of existence, then I will find you. even If it takes me forever, I will lay with you again. And will sing for all eternity and feel the heaven with our love song.