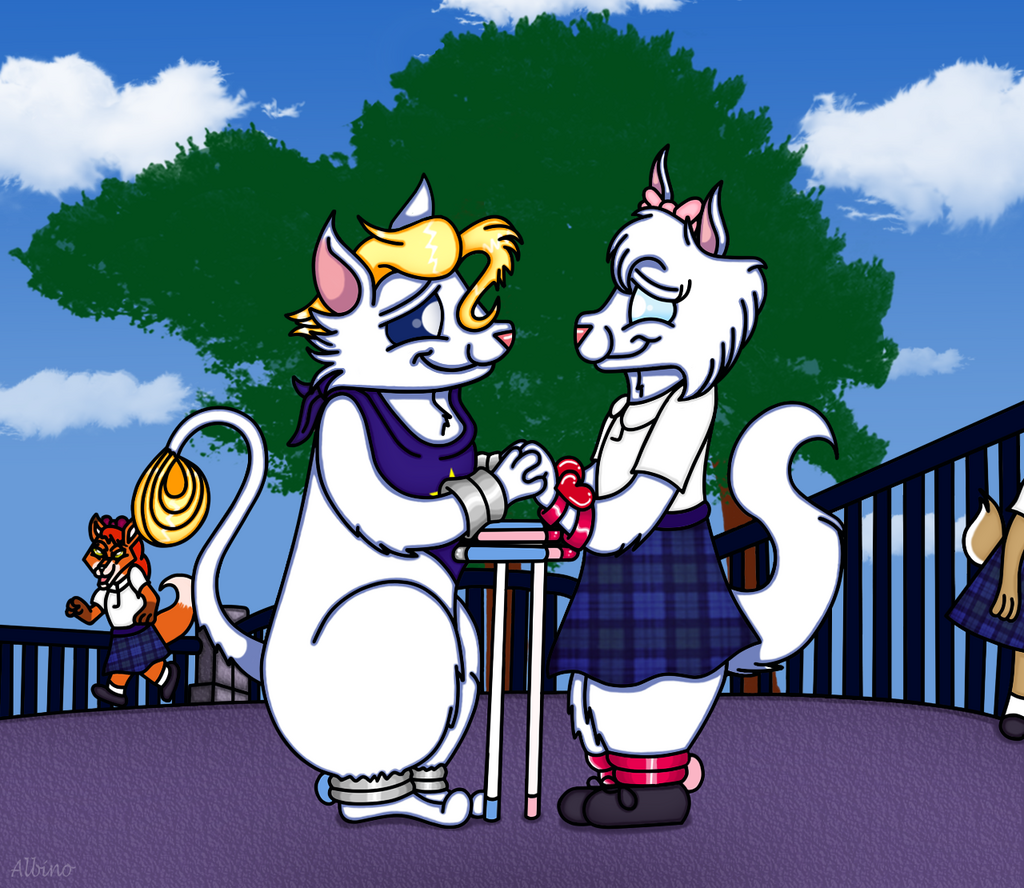 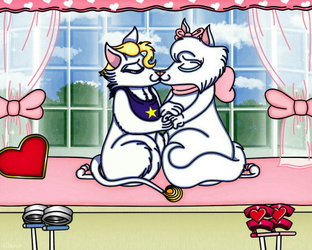 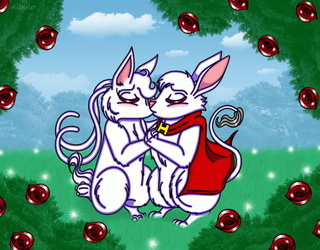 Adolf & Bijou reunite at Saint Sebastian's School for wickid Girls. After Rex (Adolf's Enemy) tells Bijou's strict father about there relationship he sends her here after he catches Her & Adolf Kissing in Dexter's Tree House.

Adolf & Bijou know that they must hide there relationship from Bijou's strict & over protective catholic Father if he catches them they feared that they would never see each other again. One day Bijou invites Adolf & Dexter over to her house while her father was still at work & she shows Adolf her bedroom. Adolf gives Dexter the duty of The Look out. Adolf tells Dexter that he can look out & watch for Bijou's father & warn them of his coming while him & Bijou kissed in her bedroom, so that he could have time to hide or get away. Dexter happily agrees & stays to encourage his friends relationship.

After Many failed attempts in trying to seduce Bijou, Rex becomes furious when he finds out Bijou likes Adolf & not him. Rex then fights with Adolf over the matter becoming Jealous & Rex vows to get back at Adolf for stealing Bijou from him. Adolf tells Rex that Bijou was not a trophy & he shouldn't treat her like one.

After leaving the movie theater one day. Dexter tells Adolf , Bijou & there doggy companions whom came with them that he was going too his grandparents house over the weekend who lived over an hour away from Paris. so they had 3 days to spend alone together. Rex walking his dog by passed the movie theater & saw the three talking. Bijou was holding Adolf's hand. The jealous Rex watched the three & there dogs. ease dropping there conversation as he eased closer staying out of sight with open ears.

Adolf asked Dexter if he & Bijou could use his tree house. But Dexter tells Adolf that he was going to be gone. Adolf tells Dexter that " If Bijou's father catches them he'd kill her" this bit of information arouses Rex who had been ease dropping & the Tomcat devilishly grins with satisfactorily. Dexter finally agrees to let his friends use his tree house & told them that he will be back sunday evening. When Adolf ,Bijou & there dogs arrive at Dexter's tree house they thank Dexter before he leaves & tell him good bye. Adolf & Bijou spend the rest of there time kissing & Hugging each other up in Dexter's Tree house as there dogs rubbed noses.

In order to ruin their relationship, Rex tells Bijou's strict father about it. After Rex calls him on the phone with news concerning Bijou, Mr. Estelle who responds to Rex's Phone call shows up at Dexter's House and immediately goes up Dexter's treehouse.

Shocked to see Adolf and Bijou together kissing, he lets out a prolonged "Noooooooooooooo!" that is powerful enough to make birds flee from the tree. Mr. Estelle then snatches her & Kit out of the tree and nervously asks her what happened. Before Bijou can even fully explain, he yells at her. As Mr. Estelle carries her off on his back, & Kit by his collar he tells her that she will be put in an all-girl school and that she will never see Adolf again. After Bijou and Adolf cry out for each other, Mr. Estelle puts her in the car, slams the door, and bitterly drives off, leaving Adolf heartbroken & in tears. As a punishment, Bijou is Transferred from The enriched learning center for gifted children & sent to (Saint Sebastian's school for Wicked Girls ) an all-girls Catholic School while Adolf is left behind heartbroken

Rex standing nearby sees the entire thing & smirks with laughter he watches Adolf & Blondi descend from the tree house in tears. He walked up to Adolf & Blondi displaying fake empathy. Rex Frames Dexter, convincing Adolf that it was Dexter's fault. after being convinced. Adolf, blinded by sadness & anger. Adolf puts the blame on Dexter as he was the only one who knew of there relationship. Rex leaves with an evil grin gloating to himself that his work was done.

When Dexter comes back from his grandparents house an inraged Adolf Attacks & Insults him. Dexter confused doesn't know whats going on & asked Adolf why he was so mad at him. A crying Adolf tells him that he ratted them out to Bijou's father on purpose Dexter tries to explain to a heart broken Adolf that he didn't tell anyone anything. Still blinded by heart ach Adolf is still not convinced. When Dexter & Adolf go back to school that following Monday Adolf stared at Bijou's empty desk & noticed that Bijou was gone still refuses to talk to Dexter as he wondered where Bijou was asking the professor & teachers of her
where abouts. telling Adolf that Her father transferred Bijou out of here.
but they didn't know where her father had transferred her too.

Adolf still angry at Dexter neglected him & refused to talk to him. through out the rest of the school day Adolf is depressed & crying getting the attentions of Professor Owl & Miss Melan the learning quardnator. who thought that Adolf was sick worried bout there star Genius they sent him to the nurses office. While sitting in the nurses Office Rex who had just come out of the bathroom sees Adolf sitting on a streatcher depressed & mocks & teases him giving off clues in which Adolf caught onto that It was Rex who ratted him & Bijou out to Mr Estelle not Dexter. Angry & furious Adolf screams & pounces on Rex. the two roll out of the Nurses office in a tustle & out into the hallway. The intense fight got the attention of many of the other child prodigy's & egg heads in the school including the teachers & professors. who peaked out of the classrooms to see the trouble. Adolf beat Rex endlessly with his crutches across his face as hard as he can slamming him against the row of Locker's that aliened the hallway.

Adolf then teleketically chokes Rex with his magical choke hold . knowing that using his magic was taboo outside of La-La land according to Damien, his uncle. Adolf then releases his choke hold around Rex's Neck & throws his down the hallway with his magic. Adolf's eyes glew a bright light green & a solid wave of dark magic hit Rex catching him off guard it threw him down the hall way of the school. an angry Rex winded by the blow got up & growled.as the students watched in intense shock. Adolf Howled And retreated back to Notre Dame church crying as Dexter ran to comfort him.

Dexter met with Adolf crying in his bedroom. Adolf apologized to Dexter. Dexter says it was OK-& forgives him. Pyro & Gabriel try to cheer him up but to no avail. later that day while Adolf was moping around the church still depressed he over herd a Nun talking to Gabriel about Saint Sebastian's Catholic school for girls & thats she had just stopped by on her lunch break. a sad Adolf limps over to Gabriel & grips his robe. Gabriel asks if Adolf was feeling better. the Nun. by the name of Sister Maggie notices Adolf's sadness & asks whats wrong. Adolf tells her about Bijou Estelle.

Sister Maggie tells Adolf that a young girl name Bijou estelle who walks with crutches like him had just started at Saint Sebastian's girl school two days ago. Adolf then smiled for the first time in a few days. catching Gabriel's happiness. Adolf request's the address & Sister Maggie gives it to Adolf. but warns him that Boys were not allowed on school grounds. But Adolf disobeys the Nun & goes to collect Dexter & head for Saint Sebastian's Catholic school.

Adolf , Blondi & Dexter go & visit Bijou & her Shiba-inu at the private all-girl Catholic school during Recess after catching sight of each other. Bijou whom was wearing a plaid skirt & uniform shirt limps as fast as she could to Adolf & Adolf goes to her in excitement embracing there hands as they stared into each others eyes Blondi & Kit rubbed noses.

Adolf & Bijou limp over to each other as fast as they could gravving each others paws as there dogs ran over to one another rubbing noses.

BIJOU: Adolph, How did yu find me

ADOLF: I followed my heart,Bijou. And a Nun at the Notre Dame Church told me where you were.

ADOLF: Me too cherie

DEXTER: I'm Sorry Rex got you thrown into the Penguin house

BIJOU: "I love Saint Sebastian's. It's run by a group of French-Canadian nuns. They're veery nice, except they neever let me out."

ADOLF: I'm sorry again, Bijou.I'm going to miss you sitting beside me in class. But I'm glad your happy at your new school.

BIJOU: I shall miss thet tu Adolph. bit it'z alright they have programs here for child prodigy's like ourselves so nu worries

ADOLF: I almost forgot I got you something

ADOLF: Pulls a small box with a bow on it out of his bandanna & opens it revealing a solid gold heart shaped locket with an opal birthstone at the center

ADOLF: I Put my picture inside * Adolf opens the locket in Bijou's Hands*

ADOLF: That way I'll be with you anywhere you go.

BIJOU: * Smiles with a blush*

DEXTER: We also got you these IDW My Little Pony comics. How Shinning Armor met Princess Cadance & Nightmare Rarity,

BIJOU: Merci Dexter These are Quite nice.

(No Talking to Boys)

BIJOU turns back to Dexter & Adolf in worry

BIJOU: Yu should go I doon't want you tu get in tu trouble with thee nuns.

ADOLF: I know, I just wanted to see you, again, you still love me.?

BIJOU: I du veary much missir. Bit I doon't know how we can continue our relationship under my father's watchful eye. he's being extra cautious new eveer since he caught us kissing in Dexter's Tree House. He says I'm noot allowed tu date.

ADOLF: why does your dad hate me?

ADOLF: I hope he can get to know me soon.

ADOLF: There is a place we can go where your dad or Rex will not find us.

ADOLF: it's where I'm from.

ADOLF: No its another land a kingdom. its a very beautiful world. My family lives there My parents & my siblings too.

DEXTER: And my Girlfriend, Noya

BIJOU: Itz soonds like a reeally nice place. Bit if my dad found out I was gone he'd be so worried, and then I will neveer see you again.

ADOLF: we can go after school , on the weekends holiday vacations & summer vacations while your dad is still at work & I'll bring you back before he gets home, I promise.

BIJOU: It soonds wondearfull I would amour to go tu thiz La-La land place with yu.

ADOLF: you have to keep it secret so no telling anyone else not even your friends here or the nuns Alright?

ADOLF: Looks at the school Bell

ADOLF: closes his eyes & Puckers his lips for a kiss

ADOLF: Oh Adolf lowers his ears in disappointment Well then.

Adolf smiles & Takes Bijou's right hand he kneeled down & kissed her hand tenderly looking up at her with a blushing smile. an enticed Bijou could not resists.

BIJOU: Oh what the Hey Bijou passionately shares A Farewell kiss with Adolf before going back inside

ADOLF: * Smiles with a blush*

when she gets back inside she notices that Adolf had put a note on Kit's collar. Bijou takes the note off her dogs collar & reads it. telling Bijou that he lived in the Notre Dame Belle tower & that she could find him back at Notre Dame Cathedral. the church that her & her father go too. Adolf Continues his forbidden secret relationship with Bijou.

Adolf , Dexter & Blondi leave the Catholic school navigating for home down the sidewalk infront of the school.

ADOLF: Dexter this sounds like the start of a beautiful forbidden relationship. * Sighs Lovingly*