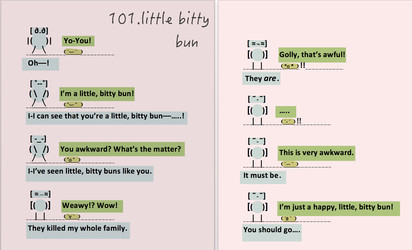 ‘‘I've seen this all over the internet, so I modified + colored it!! Look ˆ–ˆ I love it!! 101.MERRY CHRISTMAS!!
I hope everyone's had an amazing past month! Puphf's had a troublesome Christmas! He stalked Santa and
followed him back to the North Pole, because he was interested in what he imagined to be a 'stash' of Chocolate
Chip cookies! That brother of mine loves cookies. He ended up eating Mrs. Clause after she made him breakfast,
because he said she was 'so sweet', and Puphf's not... smart enough to know the difference between that and
sugar. I'm beginning to grow concerned for his taste for old ladies, but he's just too absent minded to retain
anything I tell him! I can't control him... I want to be a good big sister, but that doesn't mean taking control of
his life and telling him what I think he should do all the time! sigh But he was back in time for the family
Christmas party! Plumb forced Xycore to come! He hated it... but she says she thinks he secretly had a good time!
lol! Well, I hope everyone has had a great month! I love you guys!‘‘
~Terry