Hello Golly I'm Jules and I like bears.
I talk about bears a lot people say "look there goes Jules he's quite the bear."

That's all you need to know about me I am Jules and I bear. Bear is a way of life

bear is a state of being

bear is the essence of the universe.

Also I guess I'm an ENTP. I'm interested in a lot of things but I don't excel in them usually. I feel pretty typical as far as human beings go. I guess I'd describe myself as thoughtful and uncomfortable. You're welcome to talk to me cause really the only thing I like to do with my spare time is socialize and talk about stuff. Deep thinkers especially welcome?

Enough about ME, My art is mostly just stuff like that stuff over there. <-- Well actually a lot of the stuff over there is literally years old because I produce things only once in an eternity. You can MAYBE find stuff on my art tag on tumblr, which updates twice an eternity. This profile is probably an eternity old, in fact. This is just a place for me to post my art in a gallery kind of way, trying to avoid using it as like a social media kind of thing. Just a way to have my art in one place, hopefully grab some followers and commenters and the like. I have a really horrible track record with keeping up with these kinds of sites, so bear with me. What my real problem is is that I don't draw often enough to update these things more than once every three months, oops.

A more consistent way to keep track of me is through tumblr, where I post the deep and complex inner workings of my mind, like who the most yiffable food mascot is, and occasionally other stuff. I also have a twitter but you have to ask me for it in private.

Aspiring comic artist, or game designer maybe. Most likely just working common labor jobs for the rest of my life so I can afford to live.

Most recent: Deliver the bees 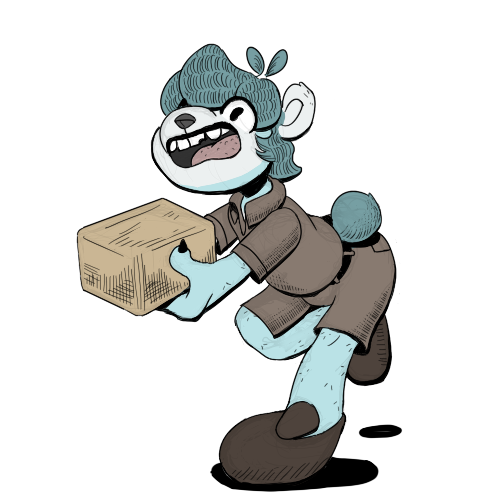 Apparently weasyl just picks a random image from my gallery to display on the folders, I don't like that. Just picks some image from three years ago and shows that right on my profile page. There are other ways I would like to change the folders around but none of which are doable/easily doable with the way it's setup so I'm just gonna remove all the folders from my front page and not think about it anymore I guess

EDIT
Wow ok scratch that hiding the folders means literally everything disappears from my profile or my submissions so I guess I'm just going to have to constantly delete submissions as I grow to no longer like them? I guess I'll just have to redo my folder system but that means I'll basically be forced into doing "featured art" "ok art" and "Doodles" which is fine but not the system I would have used but Idk whatever WHATEVER MAN I'm tired of fussing with it. And transferring all the files to new folders is going to be time consuming. Very displeased with my user experience here on WEasyl, 0/10, would not recommend. (That's facetious it's a very trivial complaint)

Art of my things

Art for other people