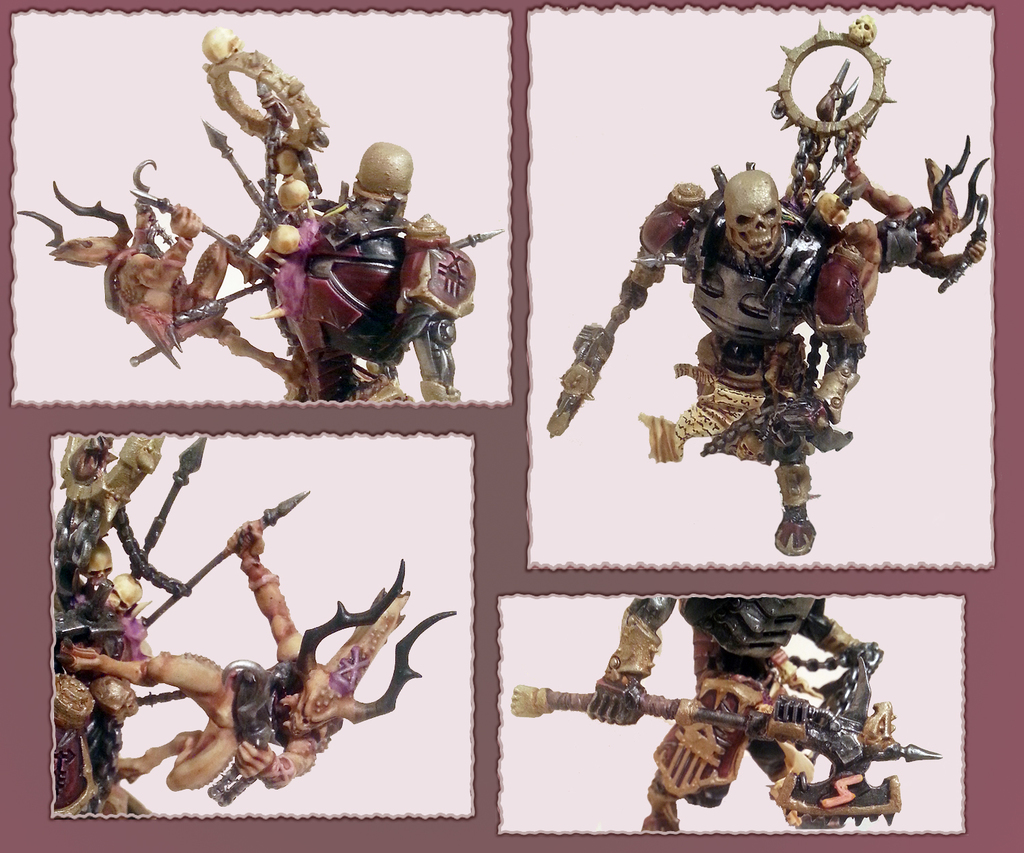 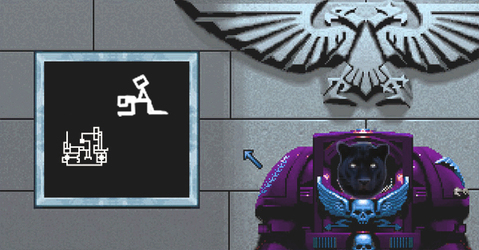 Zaied, Apostle of Khorne, Chosen by Him

Zaied began life as a chattel-slave herded to a Nephilim dropship and taken from a now nameless planet in non-imperial space. The Human sub-empire that existed there was a target long ago for its foolish independence from the Imperium had made it weak. He survived the thirsty rituals of the Red God, and eventually ascended to the ranks of his former master astartes warriors. He was proven to be a mighty warrior in his training, and noted by his mentors for skill and ferocity.

His first step down the path of damnation was during a battle with an alien species of deathless automata. While bringing silence to them, after the rest of his companions were lain low he took his fallen segeant’s brass collar and used its magiks to defend against the sorcery before killing the witch. Upon returning to the Bone Lord’s citadel he was re-issued the brazen trophy, and took part in a dread rite that enhanced its protective powers, and asserted to all his deities’ favour.

He soon fell on the mechanical junkyard planes of a forgeworld, where his fought against more metal men and slew many. When he and his companions had spilled all of their oily ichour, he saw a chance to let further blood. A pack of Bloodcrushers that had spilled into their reality was rampaging by, headed to a field of battle nearby. With his bare hands he wrestled a bloodletter down from his mount, and slew him with a knife. Unbeknownst to him however, the rider’s mount did not take kindly to his presence, and in a moment pounded him with a flurry of piston driven hooves.

Zaied would have died there, but Khorne had been amused by the man’s enthusiasm for slaughter, and corrupted his champion. The ruined metals beneath him sank into the earth, drawing all the nearby debris like a landslide, and roiling heat washed over the area as everything was bathed in orange light. Cacophonic hammerwork, and the grunting of daemonsmiths, as well as the wailing of countless souls lost in the fires of the inferno could be heard, though no man could see. When the hellforge closed, the daemon lights faded, and only the hammerwork could be heard.

A metal hulk then stalked into view of those nearby, its footsteps to sound of pounding metal. Zaied’s broken body had been replaced with the mechanical components of the Juggernaught, and he had been reborn in its steely flesh, itself still hot from the warp fires.

Producing his chainaxe, Zaied took to the dying bloodletter, who feebly recoiled from his titanic presence. With a slight heft to the enormous weapon he let it fall into the body, and its span spread from crotch to chest of the red skinned beast. In a second the Daemon was gone, drunk up by the runed weapon, which glew with beastial light, and who’s psychic scream could not be heard on the wind, but on the mind.

With his arming done, Zaied again departed for redder fields.