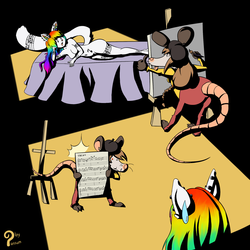 This took longer than I hoped...
But shorter than I feared!

Woohoo, 31 Miskas out of the oven, be sure to eye-chew it properly, kids!
Had a lot of fun doing these, and a lot of procrastination too.

Some days I'd be glad with surprisingly fun stuff to draw, like the poncho, the slav squat or the lobster.
Other days I'd put off working because "OMG there's no way I'm putting a lolita dress on mah possum..." (it turns out it was one of the most relaxing outfits to draw, go figure).

In the end, I still feel like creating clothes is hard when it comes to anything outside the "plain T-shirt + jeans" business, but at least I had a shot at several pieces of garment.

I feel like doing a colored version of some of these, expect AT LEAST Lobska to show up in your inboxes soon. :3