Cats of August 8 by Pignog 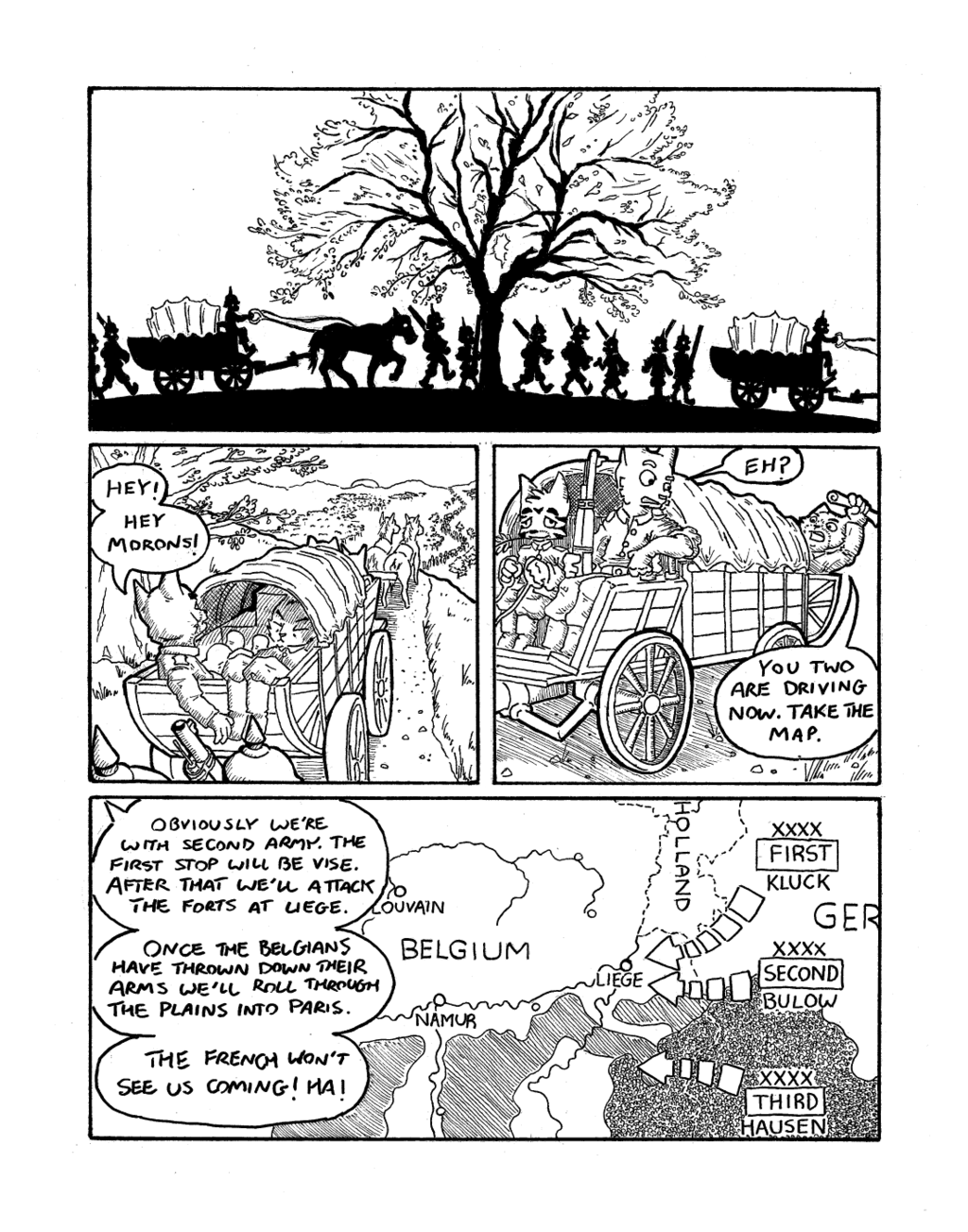 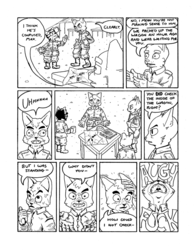 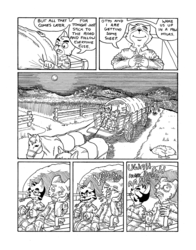 It’s still pretty early in the story and one of the panels is basically ripped straight from a map of the Schlieffen Plan, so I figure it’s worth talking about in this post. It’s also worth tackling since this story, and any future stories to follow, use the fallout from Schlieffen’s Plan as their setting.

There are researchers who argue there never was a Schlieffen Plan, it was never called that, or that it changed so much by 1914 it had nothing to do with Schlieffen. It’s not like this is an academic article, so I’m not even going to tackle this. It’s widely agreed there was some sort of plan to invade France through the low countries (Belgium, Netherlands, Luxembourg) and that this was dreamed up while Schlieffen was the head of the German General Staff. More recently, Canadian historian Holger Herwig argues there was a Schlieffen plan. Supposedly, Schlieffen’s last words on his death bed, refering to this plan, went something like, “keep the right wing strong.”

I wrote a bit in a previous post that it wasn’t some inevitability that a general war would break out with France, Russia, and Britain on one side; and Germany, Austria-Hungary, and Turkey on the other. Of course, this wasn’t the case—different alliances could have existed or we could have had no war at all (recall that in 1890 the British were worried about the French clogging the channel with boats and transporting the Russians onto their island). Margaret MacMillan does a great job in The War That Ended Peace in showing how seemingly isolated incidents in the decades before 1914 actually narrowed the options of the great powers. Here are a couple examples. After he dismissed Bismarck, Wilhelm II let Germany’s military treaty with Russia lapse. France was worried about Germany; its population growth and industrial production was out-pacing the French. It saw an opportunity for an ally and signed a treaty with Russia. But to Germany, this looked like aggression, an attempt to surround it. In the late 1890s an American captain, Mahon, wrote a popular book in the 1890s called The Influence of Sea Power on History. The book was a hit with world leaders, and if you read Tuchman’s The Proud Tower, a source of inspiration for American imperialism at the time, but more relevantly and specifically was a hit with Kaiser Wilhelm II. The book argued that great powers throughout history became great because of their fleets, and their ability to project sea power and control the sea. Wilhelm started on a project to build up a fleet of dreadnoughts, mistakenly believing that the British would respect this, and that Germany may be able to ally itself with them. The British, of course, could never accept another navy even approaching it in size. After all, its fleet gave Britain its security and allowed it to live in “splendid isolation” from the rest of Europe. And so the naval rivalry between Germany and Britain was born, and Britain began to look more like a potential opponent than friend.

The above were some of the constraints the German General Staff had to work with from the 1890s onward. They had managed to pick up some allies (Austria-Hungary and potentially Italy) but felt otherwise surrounded. They knew that a general European war would mean a two-front war, and that their most likely enemy would be France (recall from a previous post France’s loss in the Franco-Prussian war, and the loss of Alsace-Lorraine). So how would a future war be fought? The German General Staff drew up plans for deploying west against France first, as well as east against Russia. In the end, the German General Staff settled on the western plan. They, like most of the other great powers, believed that Russia had an outdated army that would mobilize more slowly than other powers. Because of this, the Germans believed that a quick invasion of France and capture of Paris would take France out of the war. Then, the German divisions would embark on trains and be shuttled to the east for war with Russia, ideally before Russia had mobilized and moved into Germany’s frontiers.

What were some of the specifics of the plan in 1914? It involved seven armies massed on Germany’s western border. The bulk of these soldiers was concentrated in the “right wing” that was nearest to the English channel. This was the army that would invade the low countries. The Schlieffen plan had a couple of assumptions built into it. First, the Germans assumed that in the outbreak of war, an attack from France would be launched to retake Alsace and Lorraine. At the same time, this area was hilly and defended by forts on the French side. The German armies here (4th through to 7th) only needed to hold the line, and slowly fall back into Germany, in the process drawing the bulk of the French army away from Paris. The second assumption the German General Staff made was that France would leave its borders with the Belgium lightly or undefended. 1st and 2nd armies, with support from 3rd army, would exploit this situation by invading through the low countries, swinging down from the English channel, taking Paris, and catching the main French force from behind.

The plan also wasn’t static; it changed between the original Schlieffen plan and August 1914 due to practical problems and the evolving political situation. The Germans (and even the French) weren’t certain that Britain would enter the war. They weighed the consequences of violating Belgium’s independence, which was guaranteed by Britain and would likely bring it into the war (Bismarck had even warned against invading Belgium decades earlier for this reason). Originally 1st army was to invade through Holland, but politically Germany needed the Netherlands during the war for trade. So now both 1st and 2nd armies would have to invade through a small corridor into Belgium, running straight into the fortresses of Liege. The plan also assumed Italy and Austria-Hungary would provide divisions to station on the left wing, freeing up German divisions to strengthen the right wing. The General Staff also built into their plan divisions that didn’t exist yet, but that they assumed would be ready when a general war finally broke out. Finally, Moltke the younger worried constantly that the French would break through the center into Germany. Over time he began moving divisions from the right wing to the center. In the end, the right wing was somewhat weaker than Schlieffen had originally envisioned, and would encounter additional hurdles in the form of the British Expeditionary Force and the forts at Liege.

This post mainly covered the theory of the Schlieffen-Moltke plan. Obviously, once the plan was put into practice it didn’t pan out. Germany never took Paris and its armies were stopped just short of victory at the Battle of the Marne in September. But this is all fodder for other posts.