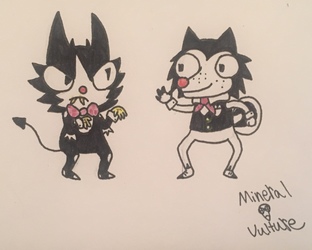 During class I was getting bored and tired of drawing my project so I took a break by doodling something else. I decided to try to get down what I wanted Damien to look like. You see, Damien is Denis' really shitty ex. I wanted him to look like a douche, you know the type. The type who is a part of a shitty emo metal band and would say shit like, "Have you heard of ___? I bet you haven't, it's pretty obscure." Yes, he will ask people if they have heard of his own band and won't reveal he is the lead singer until after you give your opinion about the band. He is a bit of a creep as well, he is just they type of guy you want to punch in the face. Denis is away from this fuck now.