Back of Sketchbook by PierceTheReindeer 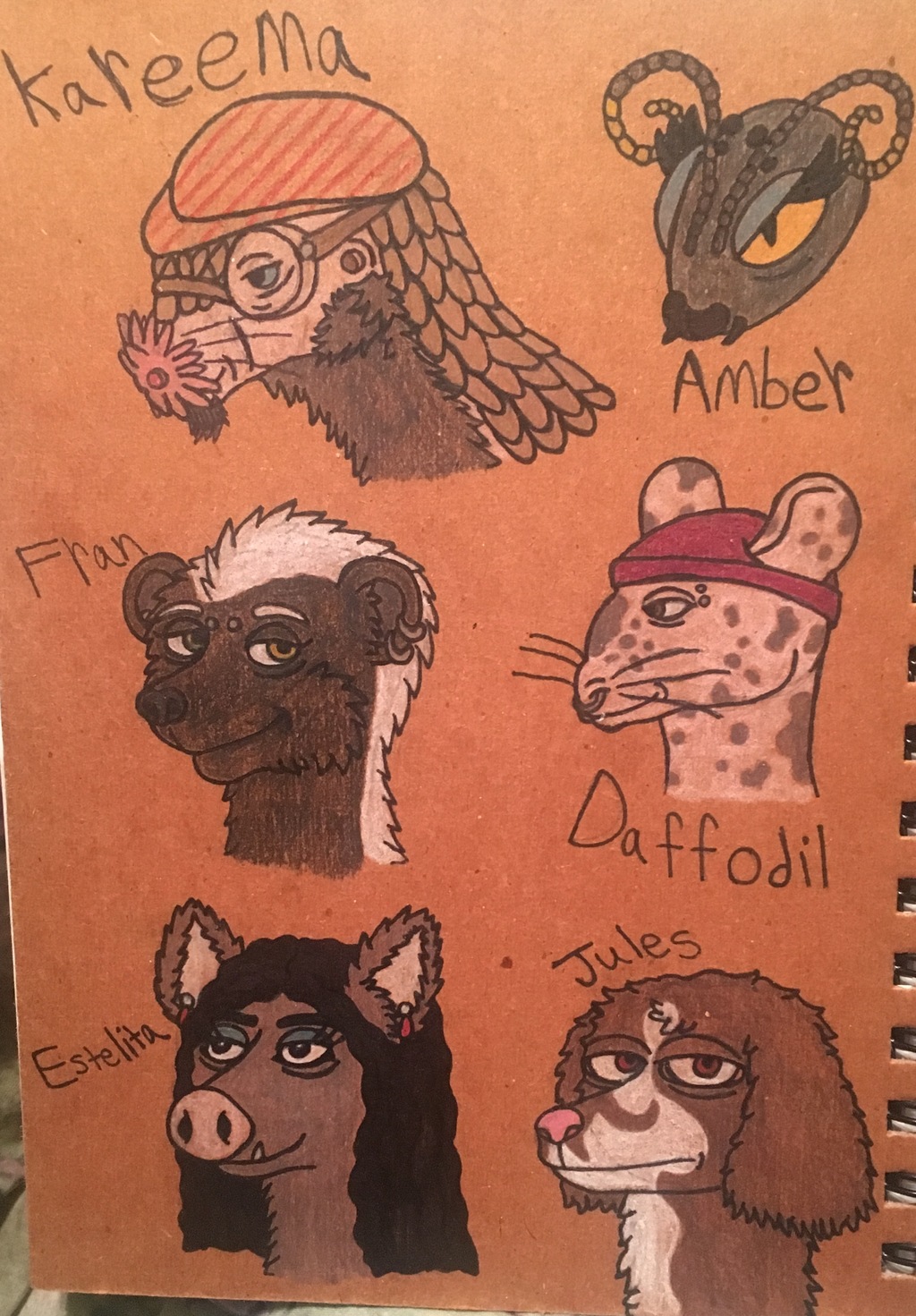 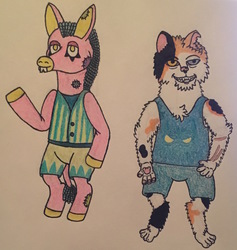 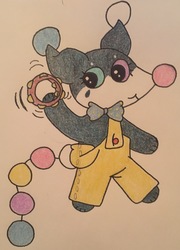 Originally posted on my art blog on January 23rd, 2018
Drew on the back of my latest sketchbook featuring my ocs Kareema, Fran, Estelita, Amber, Daffodil, and Jules. Some bio on each,

Kareema is a retired geology tutor and has picked up botany as his new hobby. He runs a plant nursery with some help from his husband, Marley, at times but mostly from two of his employees, Jaymore and Dylan (Dylan is part time). Outside of his botany he enjoys going on walking with Marley, reading and nice book, and making tea.

Fran is a Honey Badger who recently moved to Ashbridge and is getting used to the town. She moved to Ashbridge for college and personal reasons. She does various odd jobs with Mel to try stay afloat. She draws and wants to have a career in it.Fun fact: this was my first time drawing her smiling because she usually looks tired or irritated.

Estelita is a Javalina working at her family’s restaurant. She loves her family a lot but isn’t sure if she wants to eventually own the restaurant or do something else. Outside of that she enjoys making jewelry, reading a variety of books, and going on dates with Icnoyotl.

Amber is a tarantula hawk who is a model. Insect models are not really common since the general view is that they find most to be “creepy” or “gross” but she wants to show the beauty of insects. She comes off as snooty and always looks like she has a resting bitch face but she’s generally nice it’s just a lot of things can easily annoy her. She loves her girlfriend Qiana with all of her heart even though the public doesn’t understand why she would date a tarantula but both don’t give a shit. She enjoys long relaxing baths (sometimes with lush bombs involved), a good calamari, and visiting her dad (her dad is a sweet man with a lot of health problems sadly).

Daffodil is a hairless rat who just wants to work in animation. Right now she mostly draws (getting commissions at times) while working at her friend’s, Smort, sweet shop Sweet Sensations. She enjoys doughnuts (especially Krispy Kremes), playing video games like KH, and spending time with her cats.

Jules is a Taigan Hound who is a god of sorts. They were raised and taught by Helmuth, Nibiru, and Balthazar who are also gods. They act like a guardian to Ashbridge protecting it from things that mortals can’t handle. Most don’t know they are god (which is good) and they are just trying their best being a good one. They want to be better than their mentors morally since they (Helmuth, Nibiru, and Balthazar) are not really good (they are more chaotic neutral to a bit neutral evil). Also, the design I drew them is not final and I’m still experimenting.