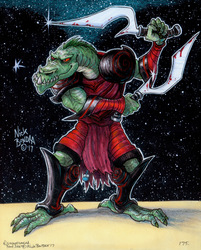 This is another weird one. In the first Clone Wars cartoon series, Count Dooku is looking for an apprentice at this gladiatorial arena called The Cauldron. This dude, so far only known to us as The Henchman or " Dooku's Guide ", brought Dooku to the arena. While watching the gladiators with Dooku, Asajj Ventress slips in and kills the Henchman while masking her presence with the Force... of course Dooku was not caught unaware. Until minutes ago, I had thought that this guy was Ventress masking her physical presence with the Force. Oh well, here's a link to the episode. https://www.youtube.com/watch?v=N1Tsn9M1DWA