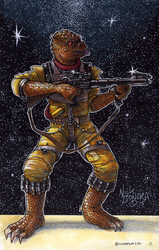 Ackmena was the nightshift bartender of the cantina featured in the original Star Wars. People loved her and thought the daytime bartender, Wuher, was a pile of dirty diapers in comparison. Ackmena once had to shut down said cantina due to an Imperial curfew. Instead of firing a sawed-off shot gun into the ceiling to get the drunk customers to leave, she burst into song. All of the patrons joined in, singing & dancing out the door. Fortunately, the curfew was soon lifted and Ackmena served as the nightshift bartender well into her " golden " years.

Ackmena featured prominently in a sequence in the once-aired Star Wars Holiday Special in November of 1978. Good times were had by hundreds.