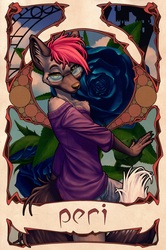 Saftey Engineers say that our history is written in blood. But our languages have been etched in stone since times before men knew how to read.

Just a fox on the internet.

I am a professional video game developer with a focus on network/systems programming and multiplayer games. My best known works in that area are 4mm Games' co-production with DefJam Records DefJam: RapStar, Ace of Spades, BioShock: Infinite, CounterSpy, and Mx vs. ATV: ALL OUT, and Monster Jam Steel Titains. I have been working as a technical writer and consultant in games, especially on tricky issues with rendering and audio engineering for multiplayer titles since the mid-1990s, with work using SimCity 2000 to model the Great Western Reserve area of Ohio and Pennsylvania, through special thanks on remasters of games like BioShock, and a lot of AR/VR work before Occulus and Meta made that a "big deal" again in the mid-2000s. As a designer and artist, I actually much prefer working on physical games and using non-digital processes, but the electronic games generally pay much better.

My art here is usually very personal and meant for consumption by other queer people with disabilities and therian/furry audiences. As a deaf/hard of hearing fox and Autistic/ADHD/neurodivergent critter, I hope that some of these weird experiments encourage others to keep picking up their pens and papers and trying something that is incredibly hard. I still think writing a few thousand words myself is much, much harder than prototyping a video game, but as Vonnegut said: so it goes.

I regularly volunteer at games and furry conventions, generally as a "back of house" member of staff providing live operations support for others. I first started doing that as part of the live photo coverage team at A-Kon from 2004 onwards and still love cosplay far too much. Cosplay is not consent for anything, nor are fursuits: remember to ask someone in costume before you take a photo or most expecially touch or grab any part of their garb.

Growing up I learned many languages from my family's rich cultural heratage mixing Louisiana Cajuns from before 1750 with parts of the Irish, Quakers, and later arrivals from Alsalce-Lorrane. This means I can understand far more languages than many people expect, especially if we share a sign language (I'm probably best at Signing Exact English, but I can fake some LES/ASL). I use computers as part of my literary studies and that's why I believe that translators and sensitivity readers are often some of the most important consultants on any projects. If you'd like a quick check from a strange editor with a lot of deep knowledge of American and Western European queer culture, feel free to ask me to help you out.

As someone who believes that preserving languages allows people to be liberated from the structures that otherwise make them feel trapped, I dream of a world where we celebrate the unique literary and cultural heritages of every tongue and people rather than trying to unify everything under English, French, or Japanese. I can understand written Japanese, English, French, and Spanish at a professional level, and am always learning new Gaelic/Celtic languages when I can. I also play accoustic and electric guitar and would love to pick clarinet back up again someday.

I'm happy to help with your video game or review your book, but be warned: as someone who has edited anthologies and zines before, I do my best to be kind but sometimes a firm no is required. My rates are negotiable especially for underespresented groups and furries with disabilities. Ask before assuming you can't afford my time.

This is your irregularly scheduled status update report regarding the state of the fox (peri) and their various accomplishments, deeds, and misdeeds within the literary and cultural circles of this corner of the Internet.

Some of you who have been following me for a while on FurAffinity or DeviantArt may have noticed that some of my old accounts are no longer valid. I would like to assure you that that is probably intentional and as of today I am not yet dead. I'll hold off on celebrating my normal big accomplishment of getting another year of life until after D-Day t his time around, however, as I'm still based in Arizona for the next few months at least.

I'm still here, still queer, still disabled, still deaf, still writing as best I can in America under those circumstances. However, like many queer folx around the world, especially queer "creatives" who survive primarily by writing and making art, this fox is extremely unhappy to be spending another year stuck in Arizona with very few local furry markets that respect the difference between my nom de plumes and my full legal name. For those of you who have liked some of what is posted here on Weasyl, I have some mixed news for you:

As usual, I have to juggle my full time obligations as a professional game developer, member of the International Game Developer's Association, and my obligations to USENIX, the Association for Computing Machinery, and the Arizona State Deaf Society before I can agree to any amount of work. If that poses a problem for you, I understand that scheduling is difficult for everyone. However, I cannot provide any flexibility with regards to delivery dates. I can be more flexible in terms of payment, but do require some amount of payment once I agree that I will work on your commission or review your code.

The fun stuff coming up:

Apres quelque lunes passer, lasser les bonne temps roullez, mex amix. It is soon to be a new phase of the moon, and though I may never see Louisianne again, I still remember to march home with pride and sorrow.

My complete commission queue is never available publicly do to NDAs with other game companies, publishers, and platforms. Since a lot of my work involves dealing with delicate technical challenges and difficult topics like trauma and the realities of queer life, I prefer not to disclose who I am working with unless explicitly requested. I may have to turn down your commission if there's a conflict of interest or overlap with what I'm already working on. Written works and art are often easier to take on than actual game development. I prefer for my part of the work to be "open access", usually either a Creative Commons WITH ATTRIBUTION/SHARE ALIKE/NON-COMMERCIAL or BSD 3 clause style license. I give discounts for free/open access comissions.