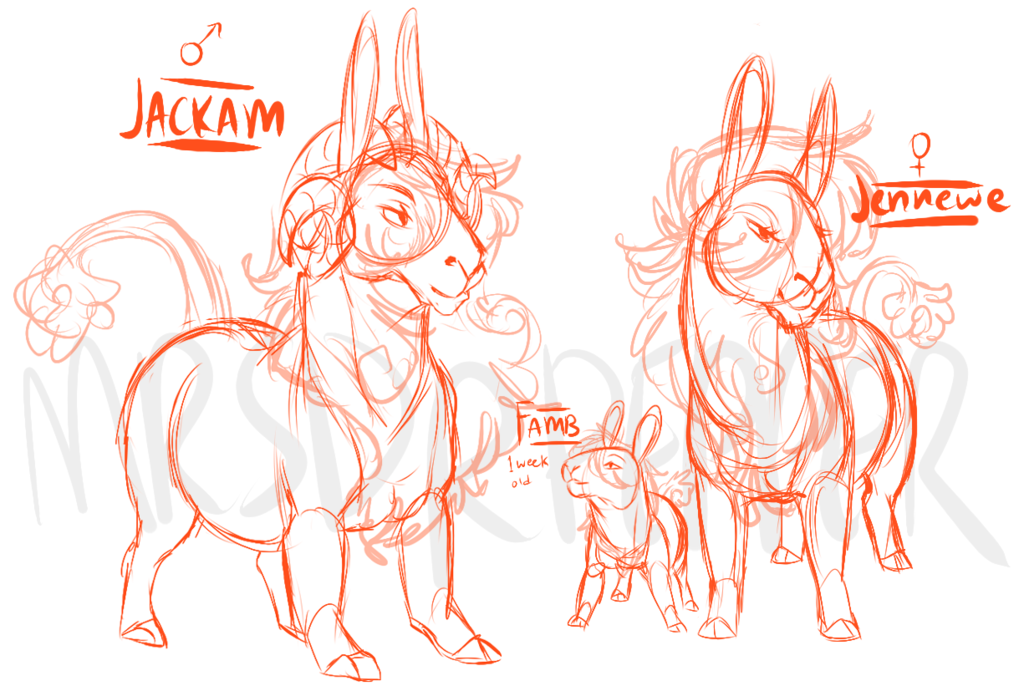 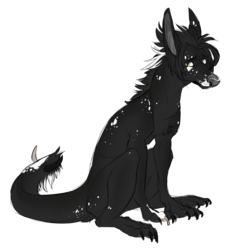 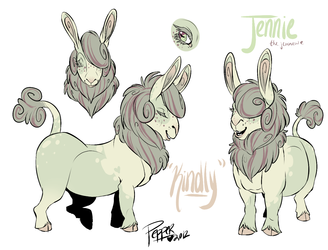 Info for my upcoming adopts so you can get to know them!

The sketches are so you can see how their faces work outside of profile.

If you buy one, I'll expect you to read/have read the following info so you can learn all you need to know about your new babies!

Adults are roughly the size and slightly more than the weight of your average Shetland pony. Fambs at birth are just tall enough to stretch their necks up and nurse.

Shonkeys are notable for their soft mane of shaggy or curly hair or wool. They have varying lengths and styles, but the manes almost always grow over their eyes (because it's my species and I said so). The rest of their bodies are covered a soft thin layer of wool.

Depending on the climate of their homes, the develop a winter coat, where their manes and body wool thicken considerably. In mid spring, they shed their excess wool naturally so that they can't overheat during the summer. Until it is shed, it can be itchy or uncomfortable for the shonkeys, so sometimes they will attempt to aid the process by rubbing against things or rolling on the ground.

If they live in constantly cold climates, they keep thicker wool coats year round and have heavier manes.

Shonkeys are very docile and rarely fight amongst one another. They usually live in groups with many females and enough males to protect the flock. If their group is threatened or cornered, the males will form a circle around the females facing outward in case they have to charge and butt at their enemies.

It isn't rare for jackams to live alone, but jennewes typically live with one or more others shonkeys so she will not be completely vulnerable to being attacked by a predator (she isn't as well-equipped to defend herself alone)

They are mildly territorial; if a stray shonkey wanders towards a flock with the intention of joining, it will have to display a kind gesture to be considered. It's easy to be accepted into a flock.

If flocks come into contact with one another, they will sometimes come together and socialize in a civil manner for the opportunity of meeting new shonkeys. Sometimes smaller flocks with join with larger ones in such situations, and sometimes some flock members will join the other flock, or more ambitious new couples will go out on their own to create new flocks themselves.

Flocks have different mentalities depending on the founder(s). They can have singular leaders, multiple leaderes/their own little governments, family leaders, or just go with the flow.

While there can be ill-tempered or disagreeable shonkeys, they aren't capable of being homocidal or malicious. They usually don't kill each other or other species, because they do not eat meat; therefore there is no logical point to killing. If endangered by another animal, they will try to discourage through defense or injure the creature and flee. On the rare occasion that this will not suffice, they will sometimes take measures of killing. Killing is not usually in their nature, however.

Shonkeys are completely herbivorous. They spend most of their time grazing to stay fat and happy. They can also eat flowers, weeds, and grains.

Shonkeys can be kept as any other farm animal, with plenty of field space for grazing and tender love and care. If you have a family or flock, they can take care of themselves pretty well and don't need a great deal of human attention; just plenty of space to do their thang and a comfortable stable for each of them during the bad weather. Also plenty of treats of oats and other more fatty snacks.

They can be used to pull small ploughs/carts, etc, as a donkey would. You can also ride a larger stronger shonkey. They're rather slow-moving, but they have a lot of stamina.

During spring, their excess neck wool and body wool can be sheered for human use. Being sheered is actually a relief and a relaxing process to the shonkeys, as it relieves them of itchiness. It can also be a good bonding time between shonkey and farmer if they have a nice companionship.

Males, or "jackams," usually have a fair size mane, depending on the climate of their homes. They have horns of varying sizes and shapes. Though they're pretty round as the species demands, they're a bit more angular with a more sharp facial structure, and muscular. While somewhat taller than jennewes, they're still very stout. Jackams have an extra layer of bone plating on their skulls as padding in case they need to charge hard.

The females, "jennewes," typically have thicker and more desirable manes than jackams depending on the climate of their homes. They're more rounded than jackams and can be less muscular. They're also shorter, but females aren't usually too much smaller than the males. While they are capable of butting with their heads alone for defense, it can be dangerous as they aren't equipped with an extra layer of bone on their skulls. Therefore, they're more prone to fleeing.

If you have any questions regarding the species, feel free to note me or comment!

Shonkeys belong to me, y'alls. If you want one, it's gonna come from me.